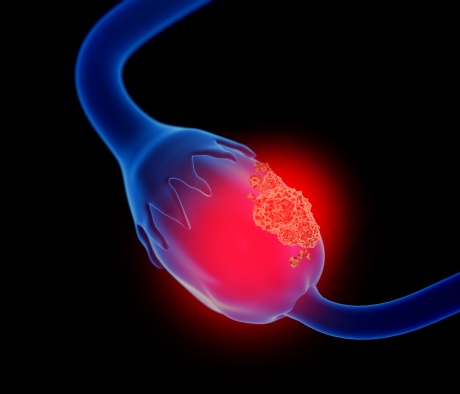 Using organoids that closely model certain features of ovarian tumors, researchers have identified and tested treatment combinations that may benefit patients, many of whom experience acquired or de novo resistance to PARP inhibitors.

According to Grandori, the findings are significant not only because they present opportunities for improving ovarian cancer treatment, but also because they show how high-throughput drug screening with patient-derived organoids, comprising living cells from individual patients’ tumors, could transform precision oncology drug discovery.

SEngine’s PARIS test, which it performs in a CLIA-certified lab, combines functional drug testing and DNA sequencing of patient-derived organoids and predicts patients’ responses to treatment. The company has demonstrated the test’s capabilities in a retrospective study and has generated preliminary data from ongoing prospective studies. But, as shown by the EBioMedicine paper, the test can also be used to identify new targets and aid pharmaceutical companies’ drug discovery efforts.

Although much of the human genome remains untapped in drug discovery, Grandori is hopeful that SEngine’s organoid method can illuminate these “dark” regions. “What this article shows is that there are many genes that are highly druggable within the human genome and within the epigenome,” she said, adding that accelerating drug discoveries and cancer cures will require better interrogation of those yet unexplored parts of the genome.

In the EBioMedicine paper, the researchers focused on the genes that could be targeted with agents already in development or approved for another cancer type. Those drugs may be synergistically combined with PARP inhibitors already used to treat ovarian cancer. BMS’ dasatinib, for example, is approved by the US Food and Drug Administration to treat certain leukemias, and AbbVie and Constellation Pharmaceuticals are developing navitoclax and CPI-1610 for myelofibrosis.

Using the PARIS test, the researchers also identified targetable genes for which there are no drugs available yet, and they hope to soon publish these findings and present them at an upcoming medical conference.

In the meantime, the findings of the study could pave the way for partnerships between SEngine and pharmaceutical companies to validate and test these potentially synergistic combinations in additional, unique patient-derived organoids and, ultimately, in clinical trials.

To reach their findings that the BET, SRC, and BCL2 family inhibitors could be synergistic with PARP inhibitors as a way to overcome treatment resistance, the researchers first cultivated a collection of organoids, which they grew from cells in patients’ fresh ovarian tumor biopsies. These tumor cells were then put into a culture medium that ensured their viability and continuous growth, while preserving their molecular and histopathological features.

The investigators focused their initial research on two organoids, dubbed OCI-P5x and OCI-C5x, that were derived from a high-grade serous ovarian tumor and an ovarian clear cell carcinoma. Of all the cultured organoids, these two had features in terms of mutations, histology, growth kinetics, and response to PARP inhibitors that gave them the best chance of surviving long enough to perform all the experiments and yield findings possibly applicable to other tumors.

Using a custom library of small interfering RNA (siRNA) for 2,100 genes, the researchers tested the viability of tumor cells in the organoids on their own and after treatment with the PARP inhibitor rucaparib (Clovis Oncology’s Rubraca). If knocking down a gene reduced cell viability in the organoids at least 1.2 fold, the researchers dubbed it a “sensitizer” gene. If, on the other hand, cell viability increased 1.2-fold or more in the presence of rucaparib, they were defined as “suppressor” genes.

In this way, the researchers identified six genes that when knocked down appeared to sensitize cells to rucaparib in both ovarian cancer organoids. They highlighted the gene BRD4, which according to an analysis the researchers performed using The Cancer Genome Atlas data, is commonly expressed in high-grade serous ovarian cancer. Since BET inhibitors bind to BRD4, they reasoned that such drugs may work particularly well in combination with rucaparib.

To further validate this finding, the researchers treated the OCI-P5x organoid cells with the BET inhibitor CPI-0610 and found that its effect was indeed improved when paired with rucaparib. They tried the same experiment in six other organoids and cell lines with varying clinical subtypes and homologous recombination repair deficiency (HRD) status, and swapped out rucaparib for other PARP inhibitors, and saw the same effect. The same findings were also observed in mouse models.

Additional siRNA screening on the organoids revealed that adding a third drug to the mix — the dual BCR/ABL and SRC inhibitor dasatinib — further reduced cell viability. This, the researchers wrote, suggested that “the three-drug combination of dasatinib, rucaparib, and [a] BET inhibitor could be a novel and clinically relevant therapeutic strategy for ovarian cancer, regardless of HRD status and clinical subtype, by collective suppression of the SRC pathway, enhanced DNA damage, and induction of apoptosis.”

Based on similar experiments, the researchers also proposed that the investigational BCL2, BCL2L1, and BCL2L2 inhibitor navitoclax could be effective in BRCA1-mutant clear cell carcinoma ovarian cancers when paired with rucaparib. After screening this combination therapy in different organoids, they noted the most significant responses in cells harboring alterations in genes involved in homologous recombination and mismatch repair.

Meanwhile, another BCL2 inhibitor, venetoclax (AbbVie/Genentech’s Venclexta), did not show the same promise when screened in rucaparib-treated organoids. This, the researchers wrote, was likely because venetoclax inhibits only BCL2, whereas navitoclax inhibits BCL2L1 and/or BCL2L.

Finally, the investigators also pointed out drugs that may have a suppressive effect when combined with PARP inhibitors. For example, when they exposed organoids to vinca alkaloids, anthracyclines, or antimetabolites, this appeared to suppress the effects of rucaparib. “These findings suggest the use of certain chemotherapies in combination with PARP inhibitors could antagonize their activity in the clinic,” the researchers noted.

Grandori and her colleagues are hoping that their findings will serve as a rationale for further testing these drug combinations using SEngine’s organoid-based approach. “Our goal is to bring these combinations to the clinic by designing a trial using the PARIS test,” Grandori said. Toward that end, SEngine is requesting research access to the BET inhibitors and dasatinib from drug sponsors and forming study collaborations.

Although cell lines are traditionally used in drug discovery, they don’t contain the detailed features of cancer cells that are necessary for developing more precise treatment approaches, she explained. “[With organoids], we gather the clinical history of patient-derived organoids so the results of oncology drug sensitivities are attached to the history of a patient,” she said. The specifics of how a patient was treated previously, where they are in the course of their cancer progression, their exact tumor subtype, and myriad other variables all play into the question of whether they will respond to a given drug, she added, but cell lines cannot necessarily capture all of these factors.

“[With long-established] cell lines, unfortunately … often all we know from the original patient is their genomics, and we don’t even know if the molecular alterations match the original patient’s tumor or if they have deviated,” Grandori explained. “Here [with the organoids], we have all that information to connect molecular, clinical, and functional data.”

She also acknowledged several challenges with using organoids for drug discovery. One difficulty is securing fresh tumor samples from patients and immediately freezing them in the right conditions so they can be cultivated as organoids. Tissue samples taken from patients’ cancers are commonly fixed in formalin, making them impossible to use to develop organoids.

“Pathology labs need to save live tissue [for] functional assays like the PARIS test,” she said. “Even the most trained physicians will say, ‘Oh, we have a sample and it’s in formalin. Can you use it?’ No. The cells are dead.” Adding to this challenge is the fact that the live cells need to be gradually frozen to preserve the cell membrane integrity, which, according to Grandori, also isn’t routinely done.

Still, she is optimistic that SEngine’s organoid method will be more widely adopted with the right tools and infrastructure. She has even envisioned ways to simplify and scale the process, which SEngine may be able to develop if it secures additional funding.

“It’s a first step,” she said. “We’ll get better and better at this …  And that will be a huge step toward guiding personalized treatments and increasing the chances of identifying the right drugs for the right patients, while also generating a continuous supply of models for drug discovery.”