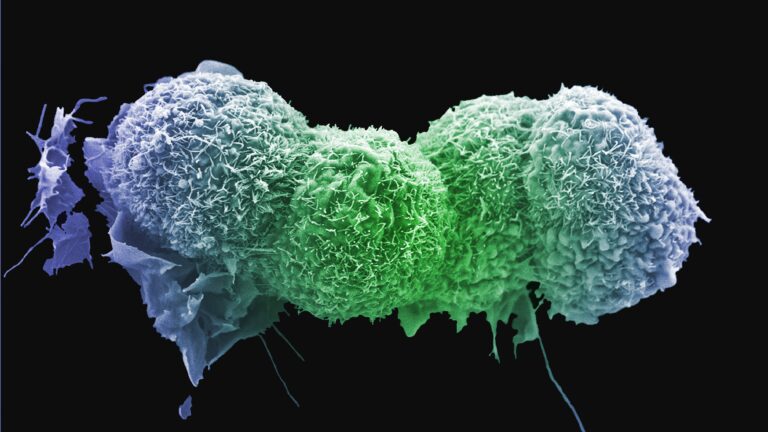 The recurrence of cancer months or even years after successful treatment is an all too common phenomenon, and scientists have been chipping away at understanding how undetectable cells can once again unleash disease on the body — often more aggressively than the first time around.

In a new study published Wednesday in Science Translational Medicine, one group of researchers describes how a cascade of events set off by high levels of a stress hormone could cause dormant tumor cells to reawaken to once again cause cancer.

The hormone, norepinephrine, is naturally found in the body, but more of this chemical is released into the bloodstream when the body detects higher levels of stress. In some cancer models, scientists found that an elevated level of norepinephrine led to the activation of cells known as neutrophils, which help shield tumor cells from the body’s immune system. Activating neutrophils in turn led to these cells releasing a special type of lipid — which then awakened sleeping cancer cells.

“It’s sort of a triangle,” said Michela Perego, a molecular biologist at the Wistar Institute in Philadelphia and lead author of the study. “And it’s a chain of events that ends up being very powerful in reawakening dormant tumor cells.”

Perego and her colleagues observed this mechanism in mice that were injected with dormant lung cancer cells. The mice were placed in a setup where they had less room than usual to move around, which likely made them feel trapped and spiked their stress levels.

A subset of these mice were also treated with an experimental beta blocker, a class of medications used to treat blood pressure. Dormant tumor cells in mice treated with the drugs remained so, the researchers found.

The team also examined 80 lung cancer patients who had had surgery to treat their disease. In this group, 17 patients saw their tumor return within three years of surgery — a recurrence that’s considered early. Compared to the other 63 patients whose cancer came back later or didn’t return at all, the 17 patients with early recurrence had higher levels of the chemical that indicates activated neutrophils.

If this preliminary finding holds true through more studies, “you could potentially monitor stress hormones in a patient undergoing therapy for cancer,” Perego said, emphasizing that it would be in addition to regular treatment and not in place of it.

STAT spoke with Perego to learn more about the research. The conversation has been lightly edited and condensed for clarity.

What does it mean for a tumor cell to be dormant?

It means there are still cancer cells around, but they are undetectable. They can be in the primary tumor location or somewhere else. If the cells stay that way and don’t start regrowing, it’s fine because you don’t have symptoms and you don’t have growth. But if cells come back, then there’s often resistance to the first therapy or sometimes it’s hard to do surgery.

How can dormant cancer cells be a problem?

Dormant cells are not a problem until they wake up. There’s big progress that has been made in the last few years in cancer therapy, but we know that some of them only last for some time before the cancer comes back. And we know very little about how cancer comes back, why it comes back, and how we can control cancer for longer before it comes back. We also can’t predict when it is going to come back.

Is this true for all cancers?

It can happen in all cancers. We know, for instance, that breast cancer patients can experience relapse after 20 years of being in remission. It doesn’t happen at the same rate across cancers, though, or even for all patients with a type of cancer.

How are you defining stress for this study? And is it any stress or certain levels of stress that reactivate sleeping tumors?

When we say stress, we mean stress hormones, and there are tons of those in the human body. We looked at this specific one, norepinephrine.

We all undergo stress, and some handle it better and some handle it worse. What is very important is that stress alone doesn’t reawaken dormant cells. You need stress hormones, but you also need neutrophils, and you need them to be activated and then for them to produce this specific lipid to turn on tumor cells.

Aren’t neutrophils part of the immune system? How do they help cancer cells?

Neutrophils are important for how organisms fight pathogens. They are good for us, but there is also an evil counterpart to them. Depending on the presence of cancer, neutrophils switch and become bad and support cancer cells. They seem to support tumor growth because they can block the other cells of the immune system that kill tumors. But we don’t fully understand this.

What was surprising about what you found?

That these hormones were so powerful in influencing the immune system was such a surprise. The whole idea that these stress hormones could show a physical effect, and take a physical toll, on cells was unexpected.

You tested beta blockers in mice as a way to stop this “triangle” of activity — why?

Beta blockers are already used in clinics to block norepinephrine, for people with heart failure and other stress-sensitive conditions. It’s nice because it’s not a new drug that has to be developed. And it could be something to add in to existing cancer therapy to help with patients’ stress hormones.

Every time you find a mechanism, you open up another 10 questions. There are a lot of other hormones that we don’t know about and how they interact with the mechanism we described. There’s also a lot to learn about the tumor environment, and how that might influence [dormancy].

The final goal of this research is to get it to the clinic, so I would be very happy to see some of this translate that way. For example, we could develop techniques to detect lipids or stress hormones to indicate when a relapse may be occurring.

This article was published by STAT News.