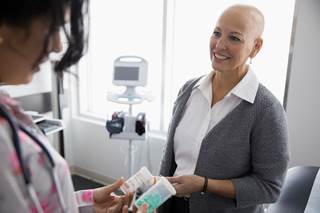 The use of niraparib in women receiving treatment for platinum-sensitive recurrent ovarian cancer did not adversely affect quality of life (QoL), according to a study published in The Lancet Oncology.

An international team of researchers led by Amit M Oza, MD, from the Division of Medical Oncology and Hematology at Princess Margaret Cancer Centre, University Health Network, in Toronto, Ontario, Canada, conducted the ENGOT-OV16/NOVA trial (ClinicalTrials.gov Identifier: NCT01847274), a multicentre, double-blind, phase 3, randomized controlled trial that enrolled patients in 2 independent cohorts determined by germline BRCA (gBRCA) mutation status (gBRCAmut and non-gBRCAmut). Patients were at least 18 years of age and had been diagnosed with epithelial ovarian, fallopian tube, or peritoneal cancer.  All patients demonstrated a complete or partially complete response to their penultimate platinum-based treatment regimen, with disease progression >6 months after completion of chemotherapy. Duration of progression-free survival was identified as the primary end point.

Each cohort were randomly assigned (2:1) to receive either niraparib 300 mg or placebo once per day until disease progression. Assignment was based on time to progression following the penultimate platinum-based regimen, previous use of bevacizumab, and best possible response to the last platinum-based regimen. Patient-reported outcomes questionnaires — the Functional Assessment of Cancer Therapy – Ovarian Symptoms Index (FOSI), the European QOL Scale, 5 dimension, 5 level (EQ-5D-5L), and the European QOL Visual Analogue Scale (EQ-VAS) — were used to assess both ovarian cancer symptoms and overall QoL.

“The ENGOT-OV16/NOVA trial showed significant improvements in progression-free survival in patients with ovarian cancer for both cohorts, gBRCAmut and non-gBRCAmut,” the authors concluded. “It is important that toxic effects associated with maintenance treatment do not result in a substantial reduction in QoL that offsets the benefit associated with delaying the time to progression or death.”

This article was published by Clinical Advisor.