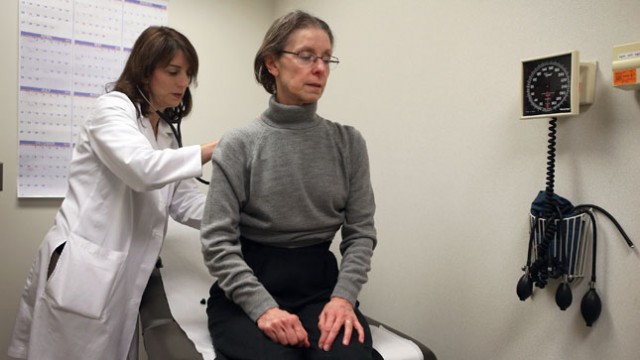 Delivering bad news to a patient is one of the toughest parts of being a medical professional. As an ob/gyn, whenever I had a patient that showed signs of ovarian, cervical or uterine cancer, it was my responsibility to inform them.

What’s truly disturbing is that once an ob/gyn sees those first signs of ovarian cancer it may already be too late for a cure. Only 15 percent of ovarian cancer cases are diagnosed in the early stages and the survival rates for those diagnosed in later stages decrease significantly. Every 24 minutes, another woman receives a diagnosis of ovarian cancer in the U.S. which adds up to 22,280 new cases each year. Approximately 14,240 women die from the disease each year, a ratio of one out of every 104 women, according to Ovarian Cancer Research Fund Alliance.

Ovarian cancer is the number one cause of gynecologic cancer deaths and the fifth leading cause of cancer-related death in women. Part of what makes ovarian cancer so deadly is that the symptoms can easily be mistaken for other health issues that women consider fairly normal.

It’s not unusual for women to experience bloating, pelvic or abdominal pain, and an increase in urinary frequency as part of normal monthly cycles or general aging post-menopause. Difficulty eating can be attributed to a lot of other ailments and most people wouldn’t make the connection that it’s a sign of cancer. While ovarian cancer is more common after age 40, it can occur in younger women, and even in teenagers.

Fortunately, we are in the age of “personalized medicine” where the science of genomics has identified mutations in over 30 cancers for which high-risk individuals can be screened. According to the Centers for Disease Control and Prevention (CDC), “without treatment, women with a BRCA gene mutation are seven times more likely to get breast cancer and 30 times more likely to get ovarian cancer before age 70 than other women.”

So, awareness of one’s family history, knowledge of one’s BRCA mutation status, and paying attention to bodily changes, together help a woman recognize the possibility of ovarian cancer. Johanna’s Law, which is named after schoolteacher Johanna Silver Gordon who died of ovarian cancer, authorizes a federal program focused on boosting gynecologic cancer education and awareness. As part of the implementation of Johanna’s Law, the CDC created the Inside Knowledge Campaign to help women learn about gynecological cancer symptoms and the importance of listening to your body and seeking medical attention if something doesn’t feel right. The campaign includes personal stories of cancer survivors talking about their lives before the disease, after the diagnosis and following treatment.

A common thread in many of these stories is that these were healthy, active women who experienced symptoms and in some cases were misdiagnosed before finding out they had cancer. One story that is not part of the campaign but that has been shared widely this year, belongs to ovarian cancer survivor Sherry Pollex, who is the girlfriend of NASCAR driver Martin Truex Jr. Sherry started experiencing stomach pains in the summer of 2014 and doctors originally found cysts on her ovaries, which they thought would go away over time. When the pain continued, she underwent further testing which revealed ovarian cancer that had already spread throughout her body.  She was 35 at the time of her diagnosis. Five days later, Sherry underwent extensive surgery, where doctors removed her uterus, ovaries, appendix and part of her intestines, which was followed by 17 months of chemotherapy. Today, she is cancer-free but Sherry has said that she doesn’t take for granted that the cancer could come back. Sherry is now an outspoken advocate for ovarian cancer awareness.

Along with awareness, we still have a long way to go when it comes to research and funding to diagnose and treat ovarian cancer. A report released by the National Academies of Sciences, Engineering, and Medicine (formerly known as the Institute of Medicine) last March echoed what scientists have suspected for several years: that ovarian cancer may originate in tissues other than the ovary. Developing technology to screen for small, early lesions is hampered because researchers don’t have a complete picture of how the subtypes of ovarian cancer develop and spread. Much about the origins and biology of ovarian cancer remains unknown.

The mortality rate for all ovarian cancers, discovered both early and late, have been decreasing at an average of two percent per year since 2003, according to the National Cancer Institute. Those discovered later, such as in stage four, still have a five-year survival rate of only 17 percent, according to the American Cancer Society. We must do better!

It’s simply not enough for us to slowly chip away at the problem as we lose more mothers, daughters, sisters, nieces and friends to this terrible disease. As an ob/gyn general practitioner, I’ve referred far too many patients to gynecologic oncologists.  It weighs on me that if we had bigger investments in research, perhaps more of those patients would be cancer survivors. Together, with greater awareness and more research, I hope we can put an end to this disease in the near future.

To read more posts like this and more, please visit The Clearity Portal. Login here.