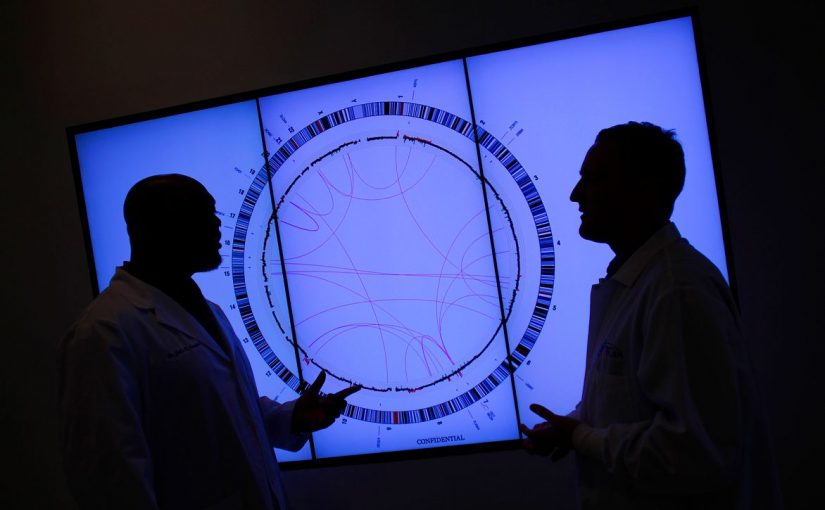 People of all sexes can have risk genes that are often assumed to affect only women. Renaming the syndrome should aid cancer prevention and treatment, argues Colin C. Pritchard.

I recently had a conversation with my parents about genetic testing for cancer risk. “You mean men also have the BRCA genes?” asked my dad. “I thought those were the breast-cancer genes,” chimed in my mom.

My parents are far from alone in not realizing that people of all sexes (including transgender people) can have mutations in BRCA1 and BRCA2genes. These genes do encode the proteins associated with susceptibility to breast cancer. But they are also associated with an increased risk of prostate and pancreatic cancer, among others.

Because this is not widely understood, testing is not being done for the right people at the right time. Those who identify as men are especially less likely to be tested1. And people who are tested can have difficulty understanding the full meaning of their results — regarding both their own cancer risk, and the risks to their family members.

In the past year, I was involved in the care of a man with late-stage prostate cancer. He knew that his sister carried a BRCA2 mutation, but he had not been tested for it because none of his medical practitioners had recommended the test. He’d been unable to walk because of cancer-related pain, and was considering hospice care when a new oncologist suggested a genetic test. Finding out that he carried the BRCA2mutation allowed him to start a more effective cancer treatment, and in weeks he was able to play golf. What’s more, the man had two daughters who thought they weren’t at risk for the BRCA2 mutation because it was on their father’s side. Both were tested and used the results to take preventive measures that substantially reduce their chances of developing breast and ovarian cancer.

In my view, part of the confusion stems from the fact that people with mutations in BRCA1 or BRCA2 are said to have hereditary breast and ovarian cancer syndrome, or HBOC. This term is not only misleading, it is also cumbersome and hard to remember. Fortunately, there is a simple solution: rename the syndrome.

What’s in a name?

Depending on the population, between 1 in 40 and 1 in 400 people carry a mutation in BRCA1 or BRCA2. As such, I estimate that this confusion could be affecting thousands of people with cancer, and their families.

All sexes have the same rate of BRCA1 or BRCA2 mutation; all are equally likely to pass these mutations to their children. Yet a study last year found that, in the United States, over ten times more women were tested for these mutations than were men1 (see ‘Missed tests’); rates of testing for genes associated with colon-cancer risk were equal. Other studies have shown that men who have been tested for BRCA1 or BRCA2mutations and diagnosed with HBOC are often uncertain about their risks of developing cancer, and sometimes keep the information from their families for fear of stigmatization2,3.

As is the case for many terms in medicine, the precise origin of ‘HBOC’ is difficult to pin down. It first appeared in the scientific literature in the early 1990s, around the time when the BRCA1 gene was identified. In previous decades, people had described hereditary breast cancer and hereditary ovarian cancer as distinct entities, on the basis that such cancers cluster in families. The discovery of BRCA1, and then of BRCA2, allowed clinicians to link HBOC with a specific genetic cause. But at that time, the full spectrum of cancers associated with these two genes was not known.

I propose that HBOC be renamed King syndrome. This is easy to remember. It doesn’t imply that the condition affects only one sex, or that people with BRCA1 or BRCA2 mutations will develop only certain types of cancer. And it would recognize the seminal contributions of pioneering cancer geneticist Mary-Claire King, the discoverer of BRCA1(see ‘Cancer-genetics pioneer’).

In the mid-1970s, Mary-Claire King (pictured) was the first to recognize that hereditary breast and ovarian cancer could be accounted for by a single gene; in 1990, she and her group at the University of California, Berkeley, identified the location of the BRCA1 gene13,14. Now at the University of Washington, Seattle, King is recognized15 as a founder of cancer genetics and a long-term advocate for BRCA1 and BRCA2 testing.

Hundreds of thousands of people have been tested for mutations in these genes, and many lives have been saved through cancer prevention. Yet, with an estimated 19 million mutation carriers worldwide at least, we have only scratched the surface.

Changing HBOC to King syndrome could have immediate benefits — for health-care providers and for all patients.

Flexibility. Removing the sex and cancer specificity from the name would allow more flexibility as scientific knowledge evolves.

People with mutations in genes other than BRCA1 and BRCA2 can have a syndrome that is similar to HBOC. In fact, some investigators have suggested renaming the gene PALB2 as BRCA3. (PALB2 encodes a protein that is involved in the same DNA-repair pathway as the BRCA2 protein, and mutations in both have similar effects4.) In short, the term King syndrome would enable researchers to link other genes to the syndrome more easily as scientific understanding advances.

Communication. Changing the name would also make it easier for people to appreciate that the syndrome occurs in all sexes, can be passed through the male lineage, and can be linked to genes that are not specifically named for breast or ovarian cancer.

Take prostate cancer. The latest US clinical guidelines recommend that people with the most advanced form of prostate cancer are tested for BRCA1 and BRCA2 mutations. This stems from the discovery that a high proportion of people with prostate cancer that has spread to other areas (metastatic) carry mutations in these genes, as well as in other related DNA-repair genes conventionally associated with breast and ovarian cancer. The recommendation also arises from the finding that the presence of such mutations has an impact on the effectiveness of treatments5–8.

Yet it is only recently that guidelines on prostate cancer were updated to recommend BRCA1 and BRCA2 testing. Before 2017, health-care providers in the United States would have found recommendations seemingly focused on breast and ovarian cancer. Specifically, the information could be found only in guidelines titled ‘Genetic/Familial High-Risk Assessment: Breast and Ovarian’9.

There is precedent for renaming a cancer-risk syndrome after a leading scientist for clarity.

For several years, health-care providers and others referred to people with mutations in any of four genes involved in a certain type of DNA-repair mechanism as having hereditary non-polyposis colorectal cancer syndrome, or HNPCC. But over the past ten years, specialists have returned to the original terminology: Lynch syndrome. (US physician Henry Lynch, who died last month, did much of the pioneering work in the 1960s and 1970s to identify the familial syndrome10.)

As with HBOC, clinicians and others found the name HNPCC misleading, because it did not accurately reflect the types of cancer to which it has been linked. People with Lynch syndrome are more likely to get colorectal cancer, but can also develop cancer of the endometrium (which begins in the uterus), stomach and ovaries, as well as some forms of bladder cancer, among many others. These individuals are also at risk of developing pre-cancerous lesions in the colon (colorectal polyps), making the ‘non-polyposis’ part of the old name especially misleading.

Some might disagree that King syndrome is the best choice for a new name, because it doesn’t describe the syndrome. They might instead favour something like ‘homologous recombination DNA repair deficiency syndrome’. But such a name would again be hard to remember for providers and patients.

Others might worry that testing rates among cisgender women (whose gender is the same as their birth sex) could decrease under the new name (especially given the male connotations of the word ‘king’), and that related health care could suffer. I acknowledge the potential downsides, but think that these would be outweighed by improvements in care that could follow. The name could help people to understand that their cancer risk is not limited to breast and ovarian cancer. It might also help them to better communicate the risks to their family members, or to a new health-care provider, and so increase the chance that testing is done.

Renaming HBOC could even spark a wider discussion around confusing names for cancer genetic syndromes. Hereditary diffuse gastric cancer syndrome, for instance, is caused chiefly by inherited mutations in CDH1, which encodes a protein that helps to establish and maintain the shape of epithelial cells, such as those found in the gut lining. People with these mutations are much more likely than the general population to develop a certain type of breast cancer11, and the children of families with this syndrome are at risk of having some types of congenital malformation, such as a cleft lip12.

Ultimately, using names that are simple and flexible, instead of obtuse and out of step with emerging understanding, could save lives by improving communication and awareness.

This article was published by Nature.