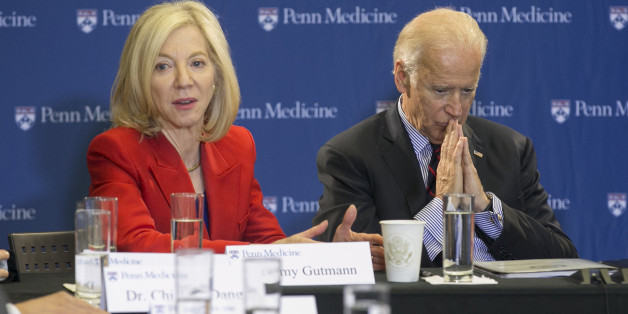 We are very pleased that President Obama called for a new national initiative in cancer research, to be led by Vice President Joe Biden. At the World Economic Forum in Davos, Switzerland, last week, Mr. Biden said he’s looking for “quantum leaps” in our understanding of cancer and how to treat it. With a focused, concentrated national commitment to collaborative and patient-oriented research, we can change cancer as we know it.

We have worked together for the past eight years, as a scientist and as an advocate, in the initiative called Stand Up To Cancer (SU2C). More than 100 top cancer scientists are meeting this week at an SU2C Scientific Summit organized by our scientific partner, the American Association for Cancer Research. These include members of SU2C-funded “Dream Teams” and recipients of individual research grants, all devoted to solving key problems in cancer research, as well as patient advocates who bring the perspectives of those affected by cancer to the scientists’ work. They will report their latest findings and discuss them with their fellow scientists – a perfect example of the information-sharing that Mr. Biden has correctly described as critical to progress.

We can identify with the Vice President’s call to break down the silos that often impede scientific research, because that is exactly what we do through SU2C. Collaboration among scientists – across institutional lines and even disciplinary boundaries – is a key part of the SU2C program. So is access to information, another major objective set by Vice President Biden. Mr. Biden has spoken of the importance of collaboration. We agree – collaboration is critical.

We know this approach works. Since its inception in 2008, SU2C and its foundation partners have launched 18 “Dream Teams,” each consisting of both clinical and discovery researchers from at least six different institutes, comprising more than 1,100 scientists at 131 major institutions across the United States and in Canada, the United Kingdom, the Netherlands, and other countries as well. They have been involved in more than 160 planned, launched, or completed clinical trials, primarily with drugs or agents donated by private companies, in which more than 7,500 patients have participated. SU2C’s funds come from major donors and the public alike.

The program is guided by a blue-ribbon Scientific Advisory Committee of world-renowned physician-scientists and researchers. The focus is on “translational” research but with the important requirement that discovery research is part of the team’s work. This rapidly moves new insights about potential treatments out of the laboratory and to the patient bedside in a few short years. That’s an ambitious goal, but SU2C is fulfilling that promise.

The most important thing about collaboration is that it unquestionably saves lives.

The life of Nik Demoreas, for example. Nik is a Florida boy who developed leukemia. In 90 percent of such cases, chemotherapy brings about lasting remission. In his case, it failed, and there seemed to be little hope. But Nik entered a clinical trial funded in part by Stand Up To Cancer and the St. Baldrick’s Foundation, testing a T-cell therapy that uses the body’s own immune system to attack the cancer. It worked. Nik is fine today, and the scientists at several institutions who worked together to develop T cell therapy are continuing to refine it. The outlook for relapsed leukemia has profoundly changed.

Our Dream Teams’ research has also helped win approval for a new combination of drugs for patients with advanced pancreatic cancer and a new drug for breast cancer in postmenopausal women. Dream Teams are using next-generation genetic sequencing to profile individual patients’ prostate cancers, helping guide personalized approaches to treatment. Another team developed a rapid genetic profiling of melanoma and is using it to match drugs to individual tumors based on their genetic characteristics -an example of “precision” medicine.

Scientists supported by SU2C are making strides in drug development, technology, precision medicine, immunotherapy, early detection, overcoming resistance to therapies, and other key topics in cancer research and treatment. These funds have leveraged commitments from biotech and pharmaceutical companies by integrating the newest technology to research the question of why patients vary in responses and how to use combinations or new protocols to enhance responses. The patient benefits, science advances and new treatments emerge.

We welcome the Obama-Biden commitment to strengthening the federal investment in cancer research, prevention, and treatment. Collaboration between institutes and scientists is key. Not all cancers can be prevented or cured, but we hope that someday all will be treatable or manageable. That would be a quantum leap. We look forward to working with this new national initiative to get that job done.

To read this entire article, published by HuffPost Science, click here or read it on The Clearity Portal by clicking here.