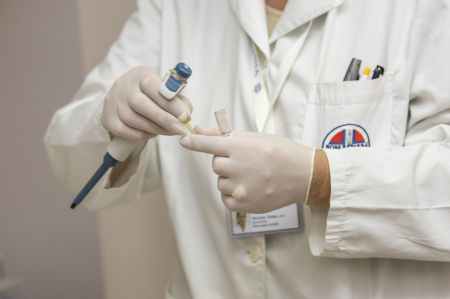 Combining a new targeted cancer drug with chemotherapy has shown promise in an early clinical trial, in patients with ovarian or lung cancer for whom all other treatments had failed.

The combination of targeted drug vistusertib along with paclitaxel chemotherapy caused tumours of over half of patients with ovarian cancer and over a third with lung cancer to shrink, and stopped patients’ cancers from growing for nearly six months.

The study, led by a team at The Institute of Cancer Research, London, and The Royal Marsden NHS Foundation Trust, was so successful that a phase II trial began while the phase I trial was still recruiting.

The study is published today (Wednesday) in Annals of Oncology and was funded by AstraZeneca, with support from the NIHR Biomedical Research Centre at The Royal Marsden and The Institute of Cancer Research (ICR) and the Experimental Cancer Medicine Centre (ECMC) and part of the Combinations Alliance portfolio.

The researchers at the ICR and The Royal Marsden, along with teams at nine other centres across the UK, tested the combination on 25 women with high-grade, serous ovarian cancer and 40 patients with squamous non-small cell lung cancer.

All the patients in the study had advanced cancers that had spread round their body, and in each case standard treatment had failed.

Because this was an early trial, the researchers initially tested if the drug combination was safe, and found it was well tolerated with manageable side-effects.

For each of these cancer types – which had become resistant to all other types of available treatment, including chemotherapy – the combination stopped cancers growing for an average of 5.8 months.

The idea for this drug combination came about after a previous study led by ICR researchers who painstakingly isolated ovarian cancer cells from fluid in the abdomen and found that chemotherapy-resistant ovarian cancers typically have high levels of molecule a called p-S6K.

This helps cancer cells grow quickly – and the researchers believe this may help cancer resist the effects of chemotherapy.

Vistusertib works by targeting proteins called mTOR1 and 2 which ‘turn on’ p-S6K. By combining vistusertib with paclitaxel chemotherapy, the cancer cells can’t use p-S6K to grow and resist chemotherapy, so tumours shrank in many of the patients, the researchers believe.

Although ovarian cancer is sensitive to platinum-based chemotherapies, most patients eventually become resistant to them. There is an urgent need to find new ways to treat patients with platinum-resistant ovarian cancer.

Combining chemotherapy with a targeted drug

“We combined chemotherapy with a targeted drug which blocks the way cancer cells react to treatment in order to survive.

“What we saw was very exciting. Over half the women with ovarian cancer and over a third of lung cancer patients saw their tumours shrink – and these are patients who had exhausted all other options.

“The phase II clinical trial of this drug is going well and I very much look forward to seeing the initial results, coming out later this year.

“We collaborated with multiple ECMC sites and delivered the study in record time so it could seamlessly move into a randomised phase II study.

“This is a testament to all the high-quality research infrastructure in our ECMC and NIHR centres along with the commitment and altruism of patients in the UK.”

Dr Susana Banerjee, Consultant Medical Oncologist at The Royal Marsden NHS Foundation Trust and Team Leader in Gynaecological Cancers at the ICR, who is leading the phase II trial*, said:

“Effective treatment options for women with relapsed ovarian cancer are limited, so these results are very encouraging.

“In the larger phase II trial we’ve recruited 140 women with relapsed ovarian cancer across the UK to standard chemotherapy (paclitaxel) or paclitaxel in combination with vistusertib. We need to wait for these results, expected later this year, to see how effective this approach is compared to chemotherapy alone.”

“Drug combinations hold huge promise for tackling cancer’s adaptation, evolution and drug resistance, just as they have in other areas of medicine such as HIV. But it is essential that we choose which drug combinations to test out in trials rationally based on our scientific understanding of what will work.

“This study is a perfect example of a rational drug combination, selected because of scientific observations made here at the ICR that resistant ovarian cancer cells seemed to rely on a particular protein for their survival after chemotherapy.

“It’s wonderful that the study has given many of the women and men enrolled in the trial many months extra to spend with their loved ones, where previously they had run out of all treatment options. I eagerly await the results from larger trials of this drug combination.”

Anne Goward, from Canvey Island, who was diagnosed with ovarian cancer in June 2015, said:

“I am extremely thankful that trials like this exist, that give women hope that there are treatment options out there. More so, that there are trials with targeted treatments on ovarian cancer types with different mutations.

“Giving women options when standard chemotherapies are no longer working and they have become resistant, like me. Seeing such positive news from this trial has given me hope for my future.”

This article was published by The Institute of Cancer Research.