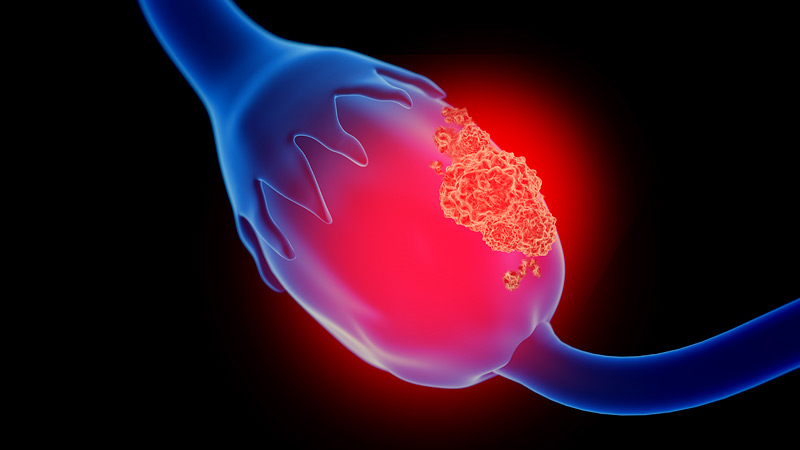 A blood test for detecting ovarian cancer is far more effective in the primary care setting than previously thought, say UK researchers, who suggest National Institute for Health and Care Excellence (NICE) guidelines will need to be updated to help general practitioners better diagnose the disease.

Garth Funston, a clinical research fellow at the University of Cambridge, looked at the records of more than 50,000 women who had their blood CA125 levels measured over a 3 year period.

Presenting the results at the NCRI Cancer Conference 2019, he showed that, using standing cut-off values, 10% of women overall had ovarian cancer, rising to 15% in those aged 50 years or over, figures that are far higher than previously thought.

They also found that thresholds for CA125 levels could be identified that singled out women with a positive predictive value (PPV) of ovarian cancer of 3%, a standard triggering for urgent referral.

“Our work shows that CA125 is a very useful test for detecting ovarian cancer in general practice,” Garth Funston said in a news release.

He told the audience that the study also indicates “that a positive test in primary care is much more predictive of ovarian cancer than previously thought”.

He said: “To put this into context, when NICE developed ovarian cancer detection guidelines in 2011, they estimated the threshold PPV based on the best available secondary care data, and they estimated it at 0.81%.

Consequently, he believes that “in the light of this evidence…guidelines both in the UK and internationally may need to reviewed”.

In another study presented at the meeting, Garth Funston and colleagues showed that, aside from ovarian cancer, women with elevated CA125 levels commonly had other cancers, such as pancreatic, lung or uterine cancer, particularly in those aged 50 years or over.

“It is really important that GPs are aware of this to ensure these cancers are not missed,” he said.

Shibani Nicum, chair of NCRI’s ovarian cancer subgroup and a consultant medical oncologist at Oxford University Hospitals, was not involved in the study.

Commenting for the NCRI, she said: “Diagnosing more cases of ovarian cancer at an early stage could have a big impact on survival and GPs are an essential part of that process.”

She believes that the findings could “help doctors interpret test results and inform their decisions about which tests their patients need next.

“For instance, an older woman who has an abnormal CA125 level should be considered high risk for ovarian cancer,” she said.

“Even if she does not turn out to have ovarian cancer, she might have another form of the disease and either way she will probably need an urgent referral.”

Garth Funston began by pointing out that CA125 was identified in the 1980s as a test for ovarian cancer and, “since then, it’s been used widely in oncology and gynaecology in secondary care”.

More recently it has entered primary care, with UK and international guidelines recommending that women who attend the GP with symptoms of possible ovarian cancer should be tested for CA125.

“But despite the widespread use of the test, it’s never been evaluated in any large studies within this setting, and that’s what we hope to address in this study,” he said.

They conducted a retrospective analysis of women in England with a CA125 test recorded in the UK Clinical Practice Research Datalink between May 2011 and December 2014.

They then identified ovarian cancers diagnosed in the 12 months following testing on the National Cancer Registration and Analysis Service, with ovarian cancer defined as an invasive or borderline tumour of the ovary, fallopian tube or peritoneum.

The team then conducted two separate analyses on the PPV of CA125 for ovarian cancer detection:

Garth Funston said that the NICE guidance on suspected cancer recognition and referral state a 3% PPV threshold should be used for recommendations to suspected cancer pathway referrals and urgent investigations.

In the post-presentation discussion, he said that the team performed a sensitivity analysis to determine whether recorded symptoms of ovarian cancer affects the PPVs.

This suggested that they were “slightly higher in women with a reported symptom but…GPs don’t always code symptoms so…it’s hard to interpret”.

In terms of how the results could be applied to clinical practice, he pointed out that, “at the minute, if you have an abnormal CA125 test, you then go on to have ultrasound and that isn’t necessarily an urgent ultrasound.

“That is a community ultrasound, it’s not on the 2-week wait pathway.”

Garth Funston added: “To me, I think we can now say that, if a woman has a point PPV of 3%, we should be doing things urgently.

“We should be doing either an urgent ultrasound or an urgent referral to specialists, depending on what the evidence shows.”

In their second study, the team looked at the same cohort of women, finding that 1160 (3.7%) of women aged ≥50 years were diagnosed with a non-ovarian cancer, while the figure was 0.8% in younger women.

However, the team notes that the absolute numbers were small and, “in isolation, CA125 is unlikely to be a useful test for the detection of non-ovarian cancers in general practice”.