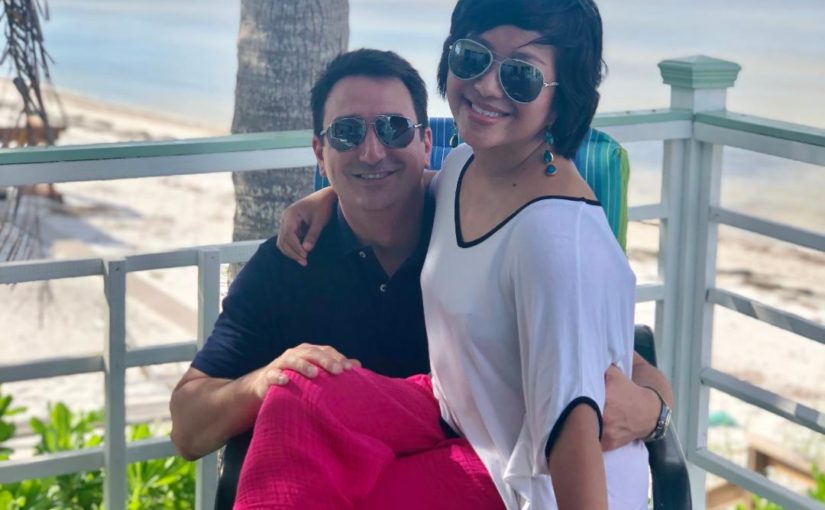 When I was first diagnosed with ovarian cancer, I made the decision to share my story, not because it was glamorous, but in the hope that I could save a life. In February of 2018, after missing my period, I took multiple pregnancy tests that came out positive. Prior to that, my husband, Scott, and I had already decided that we didn’t want to have kids. Not that we don’t like kids, I mean come on, I chose to be a pediatrician and Scott and I actually have fun with other people’s kiddos, it just wasn’t in our plans.

I called my ObGyn’s office to schedule an appointment, but they wouldn’t see me until I was 7-weeks pregnant, so I had to wait for a few more weeks. In the meantime, I had noticed that my abdomen was becoming distended. I had been having horrible fatigue and I couldn’t go through my patients like I normally would. I thought I could shake it off by just going to the gym more, but no such luck. I noticed decreased appetite, but I never really skipped a meal, so I didn’t think much of it. When my husband and I would eat out at our usual restaurants, I had trouble finishing my favorite meals because I felt full almost immediately. I remember thinking this was odd because it wasn’t like the portion sizes were bigger. There were days at work when I had really sharp excruciating low back pains which would almost bring me to my knees, but I just muscled through it. I thought wow, pregnancy sucks.

One month later, Scott and I finally went in for my scheduled 7-week ultrasound appointment. I will never forget the worried look on my doctor’s face while she had the ultrasound probe on my abdomen/pelvis. She then proceeded to ask me questions about weight loss, fatigue, blah blah blah (as a physician, I knew those questions very well and where she was heading) and she finally told me that I had a tumor that was “concerning.” The tumor was so huge that my doctor wasn’t even sure if it was emanating from my abdomen or pelvis; therefore, she had to send off the tumor markers for both colon cancer and ovarian cancer. I discussed the plan of care with my doctor as if I wasn’t even the patient (like an out of body experience) while my husband, who’s not in the medical field, listened over our conversation in shock, trying to make sense of the bomb that was just dropped in front of us. Once my husband and I got in our car, we cried…and then silence. So many emotions came rushing through me, yet I felt numb like I was frozen. Thankfully, I was seen by a gynecologic oncologist the very next day, who reassured both my husband and I that my tumor would most likely be benign, because I was young. That honeymoon period lasted at most, one day, when my CT scan and blood work revealed ovarian cancer. I was shocked.

My mother had breast cancer at 52 years of age, so I’ve prepared myself for the possibility of that later on, but not ovarian cancer, and definitely not this early. I thought I had more time. Since I’m a physician, I had played out the worst-case scenarios in my head before going into that 7-week ultrasound appointment to try to anticipate my next move – I thought of ectopic pregnancy, miscarriage, or even the rare molar pregnancy, but NOT cancer. Ovarian Cancer NEVER crossed my mind. I was completely blindsided. I mean, one week before my diagnosis, we were just figuring out which TV to buy for our new house but now this!? And just like that, my life was completely turned upside down. Nothing could prepare me for that. I underwent a 7-hour surgery, followed by chemotherapy, which was absolutely brutal on my body. I have never seen my body pushed to such extremes. My husband, Scott, has been remarkable through all of this, along with our amazing family and friends. I always say that I may have been unlucky with my health, but I sure hit the jackpot with my husband!

I recently celebrated my one year in remission from ovarian cancer. I’m super thankful for this second chance in life because I understand that many women are not as fortunate. Being a survivor, I feel like I have a responsibility to continuously raise awareness by sharing my story to whoever will listen in hopes of saving a life. Equally importantly, I rally funding to help further research in ovarian cancer, which I do through social media outlets, such as Facebook fundraisers. I remember when I was getting chemo, I spoke with different oncologists, and they differed on how many rounds of chemo I should get, due to limited studies that are currently out there. Should I do 3, 6, or somewhere in between!? I hated that the magic number for my rounds of chemo was up in the air because of limited research. It was hard for me to wrap my head around it, especially being a physician. But my oncologist’s pitch to me was to do my best to complete 6 rounds of chemo because according to him, if my cancer comes back, they’ve got nothing. Well, that’s reassuring… I didn’t really want to subject myself to further chemo if I could help it but since research was lacking, I did as close to 6 rounds as my body could take. I got to 5 rounds, but I ended up in the ER, so we never finished the sixth.

Yes, chemotherapy absolutely saves lives, but not without a cost. More research in ovarian cancer needs to be done so that patients, like myself, don’t have to be exposed to extra rounds of chemo unless necessary. It has been a year since my last round, and my body is still reeling from it because of its horrible lasting side effects. The only way to drive the much-needed research in ovarian cancer is through funding. That’s why my husband and I work so hard campaigning on Facebook fundraisers to help donate money and hopefully overtime make a difference. I choose to support The Clearity Foundation because of the work they do improving the quality of lives of those affected, providing tumor profiling to formulate more individualized treatment plans, and increasing survival rates amongst patients. Clearity also helps in guiding women to different clinical trials, which is so important for those experiencing a recurrence of their ovarian cancer, as treatment options are usually limited once you complete your first- line of chemo.

Ovarian cancer is the deadliest of all the gynecological cancers, yet sadly it is one of the least funded ones. As a result, treatment options are lagging, and lives are compromised. We can do better. My dream is for ovarian cancer to have a big enough foundation someday, where we actually have the funding to invest in much needed research in order to address the current health disparity, and be able to develop better tests and treatment options, increase awareness by educating the masses (both the general public and the people in the medical field), and ultimately make a true difference by saving the lives of those we can.

Join Queency this #GivingTuesday by starting your own Facebook Fundraiser, or by donating to support The Clearity Foundation. You can make a difference in the lives of women with ovarian cancer today!