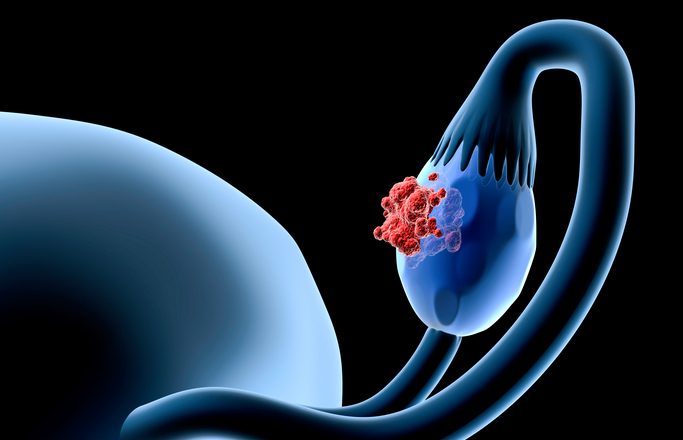 For more than 2 decades, the chemotherapy agent gemcitabine has been a mainstay treatment for several types of cancer. Now, scientists have uncovered genetic evidence of which patients with high-grade serous ovarian cancer are likely to benefit from the drug. In a study published by Panagiotis Konstantinopoulos, MD, PhD, and colleagues in the journal Nature Communications, the researchers identified a biomarker—a genetic signature within ovarian cancer cells—indicating the cells are experiencing “high replication stress” (RS-high). Cells in this state, struggling to replicate their DNA at high speed, are especially susceptible to gemcitabine, the researchers found.

The findings offer a way for doctors to identify patients with high-grade serous ovarian cancer who stand to benefit from the combination therapy and those for whom gemcitabine works well on its own. Investigators are planning a large, phase III clinical trial comparing gemcitabine to the tandem therapy in this group of patients, hoping to confirm the findings of the Nature Communications study.

“In a previous clinical trial, our group showed that a combination of gemcitabine and the ATR inhibitor berzosertib enabled many patients with high-grade serous ovarian cancer to live substantially longer before their disease worsened than patients treated with gemcitabine alone,” he continued. “For the current study, we looked for a biomarker that could predict response to the therapy.”

More on Replication Stress and ATR

Replication stress is a byproduct of the amped-up pace of cell growth and division in many tumors. While faster growth confers certain advantages, it also puts enormous strain on the portion of the cell cycle in which cells copy their DNA prior to dividing. A cell racing to duplicate its DNA is apt to make more mistakes than one functioning at normal speed. The accumulation of miscopied strands of DNA represents a direct threat to a tumor’s future: without an intact genetic code, its constituent cells are ill-equipped to survive.

Amid this unbridled haste and error, the ATR protein exerts a steadying, meticulous influence. It halts the cell cycle so DNA can be checked for mistakes and summons other proteins to make the necessary corrections. ATR’s importance to cancer cells’ survival makes it an appealing target for therapy.

Dr. Konstantinopoulos and his colleagues put that strategy to the test in their earlier clinical trial. The hypothesis was that the combination of gemcitabine and berzosertib would undermine DNA replication to a point that would be lethal to cancer cells.

The trial was largely a success, with many patients benefiting from the dual therapy. For the new study, researchers analyzed tumor samples from 57 patients who participated in the trial, looking for mutations or alterations in hundreds of genes. They found that RS-high tumors carried any of eight abnormalities—including the loss of the genes RB1 or CDKN2A or surplus copies of the genes CCNE1, KRAS, or MYC. Tumors without any of these flaws were considered RS-low.

Our discovery of a novel biomarker for response to gemcitabine in patients with high-grade serous ovarian cancer is an important step in personalizing treatment for this disease.

The study’s follow-up finding—that RS-high tumors respond no better to gemcitabine plus berzosertib than they do to gemcitabine alone, whereas RS-low tumors are more susceptible to the combination—at first seems contradictory. Dr. Konstantinopoulos explains the results this way: “In cells with high replication stress, gemcitabine creates enough additional stress that the cells die. In cells with low replication stress, gemcitabine increases the stress, but not to the point where they die. The addition of an ATR inhibitor brings the stress up to the necessary lethality level.”

He concluded: “Our discovery of a novel biomarker for response to gemcitabine in patients with high-grade serous ovarian cancer is an important step in personalizing treatment for this disease. We’re eager to validate this finding in the new clinical trial currently being planned.”

Disclosure: This study was funded by the National Cancer Institute-Cancer Therapy Evaluation. It was also supported by the National Institutes of Health and by the Dana-Farber/Harvard Cancer Center Specialized Program of Research Excellence in Ovarian Cancer. For full disclosures of the study authors, visit nature.com.