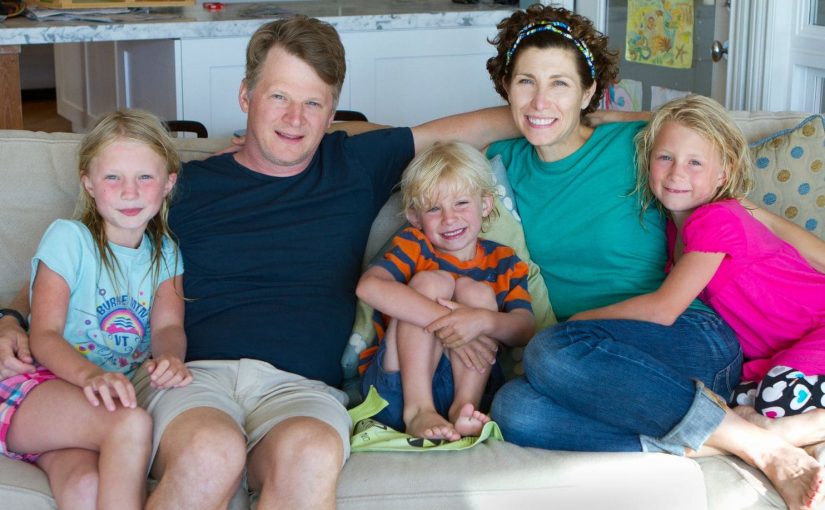 Photo: Liz Laats with husband Andy Laats and their three children. She died three years ago of ovarian cancer. The San Diego resident had suffered through 88 rounds of chemotherapy during 10 treatment regimens over six years. (Tiffany Pond)

For the past few years, as part of the University of Chicago Pritzker medical school obstetrics-gynecology rotation, med students at an optional lunchtime seminar hear from ovarian cancer survivors who share stories about the shock of diagnosis, painful treatments and constant worries about whether their cancer will come back.

Last year, listening to the women’s experiences became a mandatory part of their medical education. The hope is that by humanizing the disease, this relatively rare cancer will be on the radar of a new generation of doctors and will change this common patient narrative: “My doctor didn’t take my symptoms seriously until it was too late.”

“We felt it was important that students shouldn’t just learn about the biology of ovarian cancer, but we wanted them to know that every patient is a whole person with a story behind them,” University of Chicago gynecologic oncologist Nita K. Lee says.

The medical school curriculum change is a sign that the subject of ovarian cancer is being taken more seriously. It’s part of a surge of hopeful recent advances, including new research on blood tests to detect the disease at an early stage, new genetic understandings of dozens of cancer subtypes and new treatments. This year, in an effort to raise public awareness, the Centers for Disease Control and Prevention beefed up its consumer website on ovarian cancer and has plans to launch broadcast ads.

Compared to other cancer success stories, ovarian cancer historically has had a shortage of good news. It is deadlier and underfunded. Until recently, the disease has not benefited from new treatments for more than 40 years. About 22,240 U.S. women were diagnosed with ovarian cancer in 2018, and 14,070 women died the same year, according to government surveillance data. The reason: More than three-fourths are diagnosed when the cancer has advanced, and survival rates are low: Just 47 percent of patients survive five or more years.

That means that unlike the 3.4 million pink-clad U.S. breast cancer survivors who make up an army of activists marching for research money and attention, there are starkly fewer women living with ovarian cancer — just 225,000 in the United States — who are around to represent their cause.

Even their signature color — teal — is understated.

“Sometimes it’s hard feeling like a stepchild in a teal dress,” says activist Ellen Engle, a project manager from Potomac, Md., who was diagnosed with Stage 4 ovarian cancer four years ago at age 47. She’s an administrator of the Ovarian Cancer Support Group on Facebook. “We hear so many stories of women having their symptoms dismissed,” she says. “They’re told they’re going through menopause or have irritable bowel syndrome.”

Another common story is that women chalk up persistent stomach bloating symptoms to gluten or lactose sensitivities that they try to treat with probiotics or elimination diets, says Bobbie Rimel, a gynecologic oncologist at Cedars-Sinai Medical Center in Los Angeles. “I see so many people in my practice who let this ride out for five or six months because they thought they could figure it out,” she says. “But I end up figuring out it’s cancer, and it’s really sad.”

Yet the onus isn’t only on patients and doctors to be more vigilant. The field has lacked good diagnostic tools. The most commonly used test, developed in the early 1980s to measure a protein called CA 125, finds only 80 percent of cases and is subject to false-positives since the protein can also rise during menstruation and pregnancy.

It’s more effective when paired with a transvaginal ultrasound, which can detect an ovarian mass. But since the current imaging technology can’t reveal whether that mass is cancerous, women usually are diagnosed after undergoing surgery to remove part of or the whole ovary.

“I do anywhere from three to six surgeries for every cancer I find,” Rimel says. “And I often don’t find them early enough to make a difference in the survival of patients.”

In search of the screening breakthrough that would dramatically improve mortality rates, scientists are looking for clues in women’s blood to see if they detect the cancer before it becomes lethal. In February, University of Kansas researchers announced they had developed a low-cost method of finding cancer markers in cell byproducts called exosomes in a drop of blood.

At the University of Texas MD Anderson Cancer Center in Houston, ovarian cancer researcher Robert Bast, who co-discovered the CA 125 test, is working on developing a different blood test that could measure multiple markers simultaneously and shave off at least a year from the time when patients traditionally have been diagnosed.

“We want to be able to detect a smaller amount of cancer earlier rather than wait for the tumor to shed enough cells into the abdominal cavity,” Bast says.

Other researchers are exploring new genetic sequencing techniques to understand how micro RNA, short molecular segments that turn off part of a person’s genome, is expressed differently in women with ovarian cancer. The team of Kevin Elias, a gynecologic oncologist who runs a lab at Brigham and Women’s Hospital in Boston, is designing a clinical trial to study blood samples of women that were collected before they noticed symptoms and were diagnosed with cancer. The goal is to see whether micro RNA patterns could have predicted who would get the disease later and estimate the magic moment when to intervene surgically to remove tumors.

“We’re trying to figure out the lead time to catch women when they’re high risk and curable,” Elias says. He says a resulting test will first be offered to the 20 percent of women who have a hereditary risk for ovarian cancer and then to the general population.

“We’re learning that ovarian cancer isn’t just one disease. It’s made up of many subtypes with distinct pathways and risk factors,” says Beth Karlan, a gynecologic oncologist at the David Geffen School of Medicine at the University of California at Los Angeles. For example, one kind of ovarian cancer tumor might be the size of a grapefruit that doesn’t spread, while another pea-sized subtype will quickly metastasize.

“We can’t continue to treat women as ‘one-size fits all,’ ” she says.

Recently, the Food and Drug Administration has approved targeted oral therapies, called PARP inhibitors, which kill off cancer cells. Although their intended use is for ovarian cancer patients with BRCA genetic mutations, which account for 15 percent of cases, researchers are exploring whether they can help women with other subtypes of ovarian cancer.

And another drug called bevacizumab — sold under the name Avastin — that stops the growth of blood vessels that nourish cancer cells has been successful when combined with chemotherapy for women with recurrent ovarian cancer. (Last summer, it was approved as a first-line treatment following surgery.)

Other targeted agents and immunotherapies that activate the immune system to fight cancer are in clinical trials. Still, the range and success rates of current treatment options are depressingly limited.

In the meantime, women should take advantage of new genetic sequencing tools to identity their cancer subtype and ask their doctor about getting into the right clinical trial instead of “going from chemotherapy to chemotherapy regimen hoping that something works,” says San Diego biotech executive Laura Shawver, who in 2008 founded the Clearity Foundation. The nonprofit group helps women with ovarian cancer get their tumors genetically profiled so they can be better matched to appropriate treatments.

“Women need to be aware that this technology exists and is usually covered by insurance,” she says.

What’s frustrating, Shawver says, is that by the time many women cycle through multiple chemotherapy regimens — the current standard of care for recurrent ovarian cancer — they might not be eligible for a clinical trial of new drugs. Also, their tumors might have changed over multiple treatments, so the drugs that might have worked initially for their subtypes are less effective.

“Your best chance for a cure is your first treatment and not when you’ve failed five other options,” Shawver says.

Before Liz Laats died of ovarian cancer three years ago at age 46, the mother of three from the San Diego area had suffered through 88 rounds of chemotherapy during 10 treatment regimens over six years that left her exhausted with chronic bone pain.

“At first, doctors gave her the treatments they said had done the most good for the most people, but they didn’t know how to treat her specifically,” says her husband, Andy Laats, who took her to more than two dozen doctors around the country.

“We kept thinking, ‘There must be a smarter doctor somewhere who knows.’ But you’re left trying to connect those dots,” he says, adding that Liz tried the “best of a lot of crappy options,” including drugs being tested in clinical trials that had worked in mice or patients with lung cancer.

“It felt like the game Chutes and Ladders. You get small steps of hope and then you fall down,” Laats says.

Despite the uneven progress, Lee at the University of Chicago wants the next generation of doctors to know that the story of ovarian cancer is changing for the better in small and meaningful ways.

“I don’t want to sugarcoat this terrible disease, but I also want students to see that women are living longer,” she says of the school’s collaboration with the Survivors Teaching Students program run by the Ovarian Cancer Research Alliance. “I want them to see the pictures of their families and the trips they’re taking. I want them to know that women are thriving. And I want them to know they might have the opportunity to identify the disease early enough to save a life.’