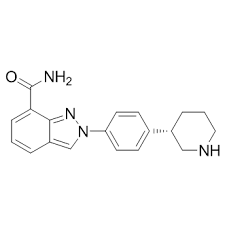 NOVA is a double-blind, placebo-controlled, international Phase 3 trial of niraparib that enrolled more than 500 patients with recurrent ovarian cancer who were in a response to their most recent platinum-based chemotherapy. There is currently no therapy approved by the U.S. Food and Drug Administration for maintenance treatment of patients with recurrent ovarian cancer following response to platinum.

“We are extremely grateful to the patients, caregivers, and investigators who participated in the NOVA trial. The results of this study, which is the first successful, prospectively designed, randomized, well-controlled Phase 3 study of a PARP inhibitor, demonstrate that a single, daily, oral dose of niraparib is superior to control in prolonging PFS in women with recurrent ovarian cancer,” said Mary Lynne Hedley, Ph.D., President and COO of TESARO. “Importantly, these results show activity of niraparib in a population of ovarian cancer patients beyond those with germline BRCA mutations. In keeping with our mission of responsible drug development, NOVA was designed to define those patients most likely to benefit from niraparib treatment and, in so doing, optimize the benefit/risk profile for patients. We believe we have achieved that goal and look forward to presentation of the full data set from this study at the European Society for Medical Oncology (ESMO) congress in October.”

Among patients who were germline BRCA mutation carriers, the niraparib arm successfully achieved statistical significance over the control arm for the primary endpoint of PFS, with a hazard ratio of 0.27. The median PFS for patients treated with niraparib was 21.0 months, compared to 5.5 months for control (p < 0.0001).

For patients who were not germline BRCA mutation carriers but whose tumors were determined to be HRD positive using the Myriad myChoice® HRD test, the niraparib arm successfully achieved statistical significance over the control arm for the primary endpoint of PFS, with a hazard ratio of 0.38. The median PFS for patients with HRD-positive tumors who were treated with niraparib was 12.9 months, compared to 3.8 months for control (p < 0.0001).

Niraparib also showed statistical significance in the overall non-germline BRCA mutant cohort, which included patients with both HRD-positive and HRD-negative tumors. The niraparib arm successfully achieved statistical significance over the control arm for the primary endpoint of PFS, with a hazard ratio of 0.45. The median PFS for patients treated with niraparib was 9.3 months, compared to 3.9 months for control (p < 0.0001).

The most common (≥10%) treatment-emergent grade 3/4 adverse events among all patients treated with niraparib were thrombocytopenia (28.3%), anemia (24.8%) and neutropenia (11.2%). Adverse events were generally managed via dose modifications. The discontinuation rate was 14.7% for niraparib treated patients and 2.2% for control. The rates of MDS/AML in the niraparib (1.3%) and control (1.2%) arms were similar. There were no deaths among patients during study treatment.

“The majority of women who are diagnosed with advanced ovarian cancer will experience a relapse of their disease, even if they respond to their initial chemotherapy,” said Dr. Tom Herzog, M.D., Clinical Director, University of Cincinnati Cancer Institute and Professor, Department of Obstetrics and Gynecology at the University of Cincinnati. “New treatment options are needed to extend the time in between cycles of platinum-based chemotherapy for these patients, and the results from the NOVA study suggest that niraparib could represent an important new treatment option for many patients with ovarian cancer.”

“While the identification of mutations in the BRCA genes was a significant advancement, ovarian cancer remains the deadliest of gynecologic cancers, and new diagnostic and therapeutic options are needed,” said David Barley, Chief Executive Officer of the National Ovarian Cancer Coalition. “The results of the NOVA trial are encouraging for patients and their families, and we look forward to seeing the full results of this study this fall.”

About the Phase 3 NOVA Clinical Trial of Niraparib

NOVA is a double-blind, placebo-controlled, international Phase 3 trial of niraparib that planned to enroll 490 patients with recurrent ovarian cancer who were in a response to their most recent platinum-based chemotherapy. Patients were enrolled into one of two independent cohorts based on germline BRCA mutation status. One cohort enrolled patients who were germline BRCA mutation carriers (gBRCAmut), and the second cohort enrolled patients who were not germline BRCA mutation carriers (non-gBRCAmut). The non-gBRCAmut cohort included patients with HRD-positive tumors, including those with somatic BRCA mutations and other HR defects, and patients with HRD-negative tumors. Within each cohort, patients were randomized 2:1 to receive niraparib or placebo and were treated continuously with placebo or 300 milligrams of niraparib, dosed as three 100 milligram tablets once per day, until progression. The primary endpoint of this study was progression-free survival (PFS). Secondary endpoints include patient-reported outcomes, chemotherapy-free interval length, PFS2, overall survival, and other measures of safety and tolerability. More information about this trial is available at http://clinicaltrials.gov/show/NCT01847274.

Niraparib is an investigational agent and, as such, has not been approved by the U.S. FDA or any other regulatory agencies.

Homologous recombination deficiency (HRD) is a defect in high-fidelity, double-strand DNA repair. HRD results from a variety of causes, including mutations in BRCA and other genes involved in DNA repair, as well as other unidentified causes.  In cells with HRD, such as BRCA1 and BRCA2 mutant cells, lack of functional DNA repair pathways, including PARP, leads to irreparable double-strand breaks, genomic instability, and ultimately cell death. Because HRD-positive cells are sensitive to DNA-damaging processes, they are reliant upon proper DNA repair by other pathways, including PARP-dependent pathways.

Comprehensive assessment of HRD status includes both tBRCA mutational analysis and assessment of genomic instability through the combined analysis of HRD biomarker components LOH, TAI, and LST. myChoiceHRD® is a registered trademark of Myriad Genetics, Inc.

Approximately 22,000 women are diagnosed each year with ovarian cancer in the United States, and nearly 80% are diagnosed after the disease has become symptomatic and has progressed to a late stage. Ovarian cancer is the fifth most frequent cause of cancer death among women. Despite high response rates to platinum-based chemotherapy in the second-line advanced treatment setting, 90% of patients will experience recurrence within two years. If approved, niraparib may address the difficult “watchful waiting” periods experienced by patients with recurrent ovarian cancer in between cycles of platinum-based chemotherapy.

To read this entire article by GlobeNewsWire.com on The Clearity Portal, do so by clicking here.