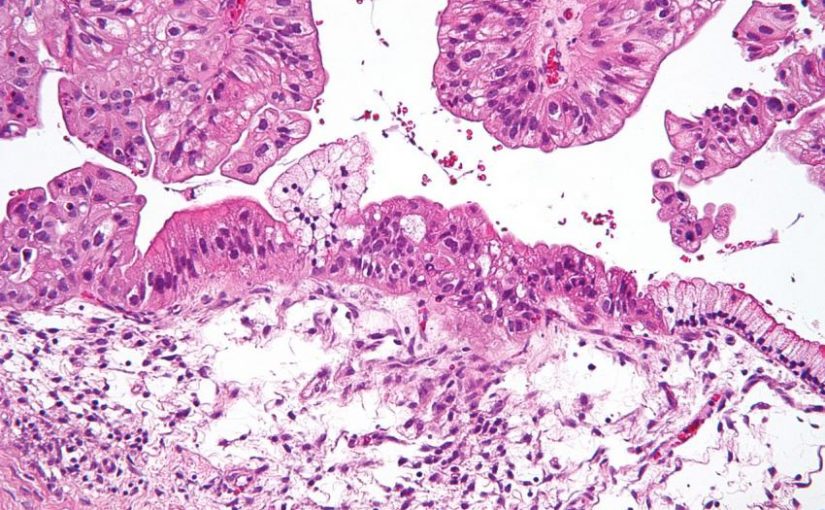 Ovarian cancer is not the most common form of cancer, but it’s among the deadliest. That’s because about 70 percent of cases recur. A new study by researchers at the University of Pittsburgh, UPMC Hillman Cancer Center, Magee-Women’s Research Institute (MWRI) and several other collaborating institutions targets the root of recurrence with new drugs aimed at annihilating stem-like ovarian cancer cells.

The study, published today in the journal Cell Reports, identifies a new experimental drug, 673A, that specifically kills the stem-like cells that tend to linger after chemotherapy. In a mouse model of ovarian cancer, combined treatment with 673A and chemotherapy resulted in significantly greater survival rates.

“You can think of stem-like cells as seeds. They put down roots and grow into a plant,” said Ronald Buckanovich, M.D., Ph.D., professor of medicine at Pitt, director of the Ovarian Cancer Center of Excellence at MWRI, and co-director of the Women’s Cancer Research Center. “I especially like the dandelion analogy. When we treat cancer, we’re essentially mowing the lawn. But the problem is that dandelions always come back.”

Buckanovich’s drug, 673A, kills these stem-like cells by targeting the ALDH pathway, which the cells rely on to clear the toxins they produce by multiplying so quickly. Treating an ovarian cancer with 673A kills only about 3 to 5 percent of the cells, but since they’re the stem-like cells, that turns out to pack a punch. And, Buckanovich added, it’s not toxic at all to the mice.

Even more striking, Buckanovich said, 673A was just as effective against chemotherapy-resistant tumors. When mice injected with these tenacious cells were given 673A in conjunction with chemotherapy, nearly two-thirds of them were in remission six months later. By comparison, all of the mice in the chemotherapy-only group died over this same timeframe.

Since ovarian cancer commonly develops chemotherapy resistance, this new drug has the potential to improve mortality rates for this deadly cancer.

But Buckanovich cautions that more work must done before 673A is ready for market. Right now, it doesn’t last long in the body, and it needs better solubility. It also has yet to be tested in humans. But, more optimistically, he points out that 673A is 10 times as effective at killing stem-like cells than the previous ALDH inhibitor, and its ability to boost the effectiveness of chemotherapy is really encouraging.

“It’s like one plus one equals 10,” Buckanovich said. “That was really striking to me, how synergistic the two drugs were. That’s important because it means you can potentially use lower doses and reduce toxicity for patients.”

This articles was published by Medical Xpress.