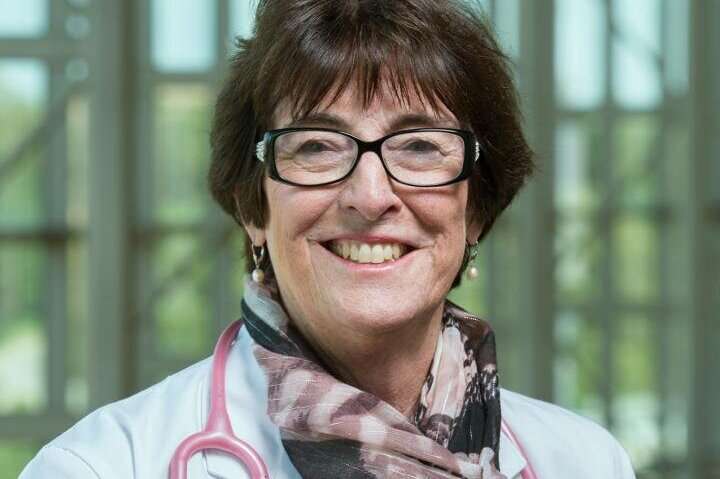 A gynecologic oncologist at the Stephenson Cancer Center at OU Medicine was a national leader of a newly published research study that reveals good news for women with ovarian cancer—longer survival times plus a treatment option that causes fewer difficult side effects.

Joan Walker, M.D., was the senior author of the large clinical trial, which enrolled 1,560 patients from around the nation, including 38 Oklahomans. The research was recently published in the Journal of Clinical Oncology, a leading peer-reviewed journal.

The clinical trial compared three different treatments for ovarian cancer, as well as the way they were administered—either through an IV or through a port in the abdomen. All patients in the study underwent surgery to remove their tumors. Among patients whose surgeries removed all but 1 centimeter or less of cancer, the results were heartening—about 75 months of survival compared to 68 months of survival for patients in a similar previous study. For patients who had no residual cancer left after surgery, their survival increased to 100 months. In addition, the treatment regimen with the fewest side effects was just as effective as the ones with more side effects.

“To have our patients live for more than five years is pretty remarkable,” said Walker, who holds the Louise and Clay Bennett Endowed Chair in Cancer at the Stephenson Cancer Center. “This clinical trial gives our patients with ovarian cancer more hope that long-term survival is possible, and with a treatment that is much more tolerable.”

The foundation for the current clinical trial was laid years ago. In 2006, Walker was the author for a similar study that compared chemotherapy given either through an IV or through an abdominal port. The results of that study were very promising at the time—68 months’ survival—but side effects like nausea, vomiting and neuropathy were so significant that less than half of eligible women opted for the treatment. That’s when Walker and her colleagues set out to discover a treatment that was at least as effective but with fewer side effects.

Their work led them to the recently published study. Eligible patients enrolled on the study had been diagnosed with stage two, three or four ovarian cancer. After surgery, they were randomized into three treatment regimens. One delivered two types of chemotherapy—paclitaxel and carboplatin—through an IV. The second regimen featured the same types of chemotherapy, but with one given through an abdominal port. The third regimen added a third type of chemotherapy, cisplatin, that was given through an abdominal port. In addition, patients on each regimen received the drug bevacizumab through an IV.

After receiving their treatments, patients were followed for 84.8 months. In addition to the improved survival rate, several other findings bring reason for new hope. Because the outcomes were the same for each regimen, patients can most likely choose the route with fewer side effects, Walker said. Giving chemotherapy through an abdominal port is often difficult for patients. A catheter delivers the drug through the port, which is painful, and the site sometimes becomes infected.

In addition, the IV therapies can be delivered in an outpatient setting, whereas patients previously had to be hospitalized. Medical oncologists can also administer the drugs in addition to gynecologic oncologists, which makes the treatments accessible to more people.

As with most clinical trials, the results serve as a jumping off point for subsequent studies. Walker plans to analyze the genetics of each participant’s tumor to see if their mutations might make a subset of them respond better to one treatment regimen over another. The trial also underscores the importance of surgery for ovarian cancer.

“Surgery is a very important part of patient’s outcome,” she said. “Earlier diagnosis of ovarian cancer, by recognizing the symptoms, will make surgery more successful. Identifying people with genetic mutations putting them at risk of cancer is also very important. Patients with ovarian cancer and anyone with a strong family history of breast, ovarian and pancreatic cancers should see a genetic counselor and get testing for known cancer-causing genes.”

Walker also will be among many people continuing to study the effectiveness of bevacizumab for ovarian cancer, as well as which types of chemo pairings might make it more effective. Bevacizumab was approved for ovarian cancer treatment in June 2018 by the Food and Drug Administration. When the clinical trial began, it had not been approved but was provided by the National Cancer Institute. It essentially starves the tumor by blocking the production of blood vessels that feed it.

Although establishing new treatments through clinical trials takes time, the resulting increases in survival demonstrate amazing progress, something Walker has witnessed during her long career, she said.