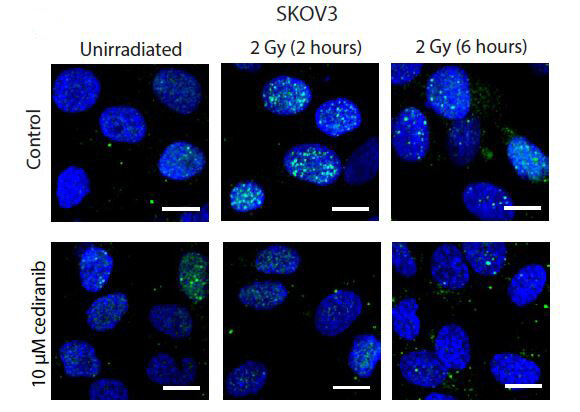 According to researchers at Yale Cancer Center, a cancer drug thought to be of limited use possesses a superpower of sorts: It is able to stop certain cancer cells from repairing their DNA in order to survive. The study, published today in the journal Science Translational Medicine, suggests that combining this drug, cediranib, with other agents could potentially deliver a lethal blow in cancer that uses a specific pathway—or process—to create DNA repair cells.

“There is a lot of interest in the cancer field in developing DNA repair inhibitors because they will greatly help treatments, like radiotherapy and chemotherapy, that aim to destroy DNA in cancer cells,” said the senior author of the study at Yale Cancer Center, Peter M. Glazer, M.D., chair of the Department of Therapeutic Radiology, the Robert E. Hunter Professor of Therapeutic Radiology, and professor of genetics.

DNA repair occurs in several different ways, which is why inhibitors of these specific techniques could be so valuable, Glazer said. “People are recognizing that manipulating DNA repair could be very advantageous to boosting the benefit of traditional cancer treatment.”

“The use of cediranib to help stop cancer cells from repairing damage to their DNA could potentially be useful in a number of cancers that rely on the pathway the drug targets,” said the study’s lead investigator, Alanna Kaplan, a member of Glazer’s team. “If we could identify the cancers that depend on this pathway, we may be able to target a number of tumors.”

Cediranib was developed to inhibit vascular endothelial growth factor (VEGF) receptors that stimulate the formation of blood vessels that tumors need to grow. But it has offered less benefit than the U.S. Food and Drug Administration-approved VEGF pathway inhibitor, Avastin.

However, a recent clinical trial found the combination of cediranib and olaparib (registered as Lynparza) is beneficial in a specific form of ovarian cancer. Olaparib, the first approved DNA repair drug, is known to inhibit a DNA repair enzyme called PARP and has shown promise killing cancer cells with defects in DNA repair due to mutations in the DNA repair genes BRCA1 and BRCA2.

But the combination of cediranib and olaparib was effective in ovarian cancer that did not have BRCA1/BRCA2 mutations—leading to the launch of several clinical trials testing the drug duo in different types of cancers, including prostate and lung cancer.

Glazer and his team wanted to understand how cediranib exerted such a powerful effect.

But what the new study found is that while cediranib does help stop growth of new blood vessels in tumors, it has a second—and potentially more powerful—function. It switches off DNA repair at an early stage in the DNA repair pathway. “Unlike olaparib, it doesn’t directly block a DNA repair molecule, stopping DNA from stitching itself back together. It affects the regulation by which DNA repair genes are expressed,” said Glazer.

Cediranib makes tumors more sensitive to the effects of olaparib because it stops cancer cells from repairing their DNA by a mechanism called homology-directed repair (HDR). This occurs when a healthy strand of DNA is used as a template to repair the identical, but damaged, DNA strand, he added.

Cediranib’s direct effect comes from inhibiting the platelet-derived growth factor receptor (PDGFR), which is involved in cell growth. The drug, therefore, works to inhibit both angiogenesis and the ability of tumors to grow by repairing mishaps in their DNA. “The capacity of the drug to harm blood vessel formation was not a surprise. But its direct effect on DNA repair through the PDGF receptor was completely unexpected,” Glazer said.

“The goal now is to investigate how we can broaden the potential of this synthetic lethality to other cancer types,” he said.