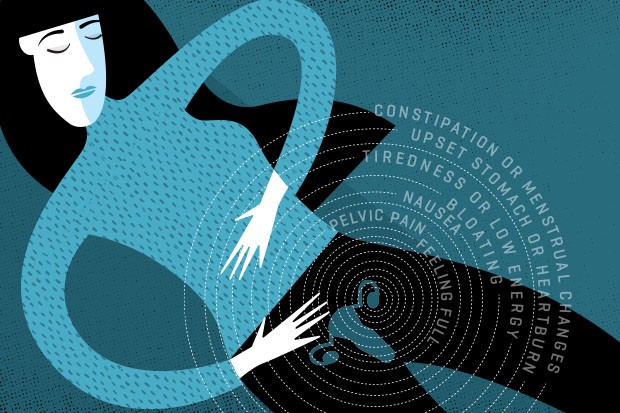 Despite its long-standing nickname, ovarian cancer isn’t really a silent killer. There are symptoms; it’s just that they whisper or are commonly mistaken for something else, like aging or irritable bowel syndrome. As a result of this — and the lack of therapies for advanced disease — ovarian cancer continues to kill nearly 15,000 women a year in the U.S., most of whom are diagnosed at a late stage.

There’s been recent progress in treatment: Three new targeted drugs called PARP inhibitors have helped many ovarian patients, especially those with inherited BRCA1 or BRCA2 mutations, which account for about 15 percent of all ovarian cancers. Combinations of old and new drugs have also shown promising results.

But there is much left to do to catch and squelch this killer.

Researchers at Fred Hutchinson Cancer Research Center are on the case, primarily in three of ovarian cancer’s most problematic realms: early detection and screening; differentiating the patients who won’t respond to standard chemotherapies from those who will; and developing new treatments, like immunotherapies, to beat back advanced disease.

Ovarian cancer’s stealth nature is one of its biggest challenges. That’s why research on symptoms and the symptom-screening tool developed by Fred Hutch’s Dr. M. Robyn Andersen and Dr. Barbara Goff of the Hutch and the University of Washington has been a key contribution. Its creation led to guidelines for assessing symptoms used by physicians.

“Prior to that work, a lot of physicians believed that ovarian cancer was a silent killer and that there weren’t symptoms,” Andersen said. “We found a very high percentage of women reported symptoms and were able to describe them in sufficient detail to make them not vague. The ovarian symptom index is one of the things I’m proudest of.”

The two-minute questionnaire asks women about bloating and/or increased abdomen size; abdominal and/or pelvic pain and whether their eating habits have changed because of “feeling full” — all of which have been identified as symptoms of ovarian cancer. It also asks about the frequency and duration of those symptoms.

“Women with symptoms that are frequent, continual and new to them in the past year should talk to their doctor, as they may be candidates for further evaluation,” Andersen said. Follow-up for women who have a positive symptom score includes a blood test for the biomarker CA-125, which can be elevated in ovarian cancer patients, and a transvaginal ultrasound, an imaging test.

Biomarkers to help with early detection?

Unfortunately, some women may not experience symptoms until the disease is quite advanced. Can it be detected earlier through a blood test? Dr. Nicole Urban, the Hutch’s longtime Ovarian Cancer Research Program head, now emeritus, worked for years to find additional blood biomarkers beyond CA-125 to more reliably screen for ovarian cancer.

That work resulted in a second blood-based biomarker known as the human epididymis 4 protein or HE4, which can predict epithelial ovarian cancer in some women. Urban also launched two big research efforts focused on ovarian cancer: a National Cancer Institute-funded program based at the Hutch called an Ovarian SPORE (for “Specialized Programs of Research Excellence”) and the Pacific Ovarian Cancer Research Consortium.

Biomarker work continues at the Hutch. One new line of inquiry was just launched by translational researchers Dr. Jason Bielas and Dr. Charles Drescher, who also practices as a gynecologic surgeon.

“This nascent collaboration is looking at ultrasensitive mutation detection for early detection,” said Drescher, explaining that early detection is essential since the majority of ovarian cancer patients are diagnosed with late-stage disease.

The researchers plan to use a DNA sequencing tool developed by Bielas known as CypherSeq, a new process for identifying rare mutations that’s far more sensitive than other methods. They’re hoping to use this tool to detect, through a routine Pap smear, a certain rare mutation that’s a hallmark of high-grade serous cancers. These cancers, called HGSCs for short, are the most common and lethal subtype of ovarian cancer. Detecting HGSCs early is key to successful treatment.

Past ovarian studies have shown that the mutation p53 is often found in high-grade serous cancers. Bielas and Drescher hope to demonstrate that it’s feasible to detect these mutations early on, when the disease can be prevented or cured.

The prevention and/or cure, of course, would still require surgery — specifically, removing the ovaries and fallopian tubes (salpingo-oophorectomy) or removal of just the fallopian tubes (an ovary-sparing bilateral salpingectomy). This type of risk-reducing surgery, made famous by actress Angelina Jolie, is currently recommended for women at high risk due to BRCA1 or BRCA2 mutations.

“If successful, our proposed work will lead to a clinically useful test that will identify women who would benefit from the removal of precancerous lesions prior to the development of ovarian cancer, and thus eliminate HGSC-associated death by disease prevention,” Bielas said.

Once diagnosed with the disease, many ovarian cancer patients receive platinum chemotherapy. Unfortunately, it doesn’t work for all of them, which means some women suffer needlessly — with no disease-busting benefit.

Last year, Hutch clinical researcher Dr. Amanda Paulovich was tapped by the NCI to participate in a new project using targeted proteomics and genomics (i.e., “proteogenomics”) to help differentiate those who will respond from those who won’t — before any chemo is given.

“Fifteen to 20 percent of patients have tumors that never respond to this chemo,” said Paulovich, who is leading one of three multisite collaborations created by the NCI’s Proteogenomic Translational Research Centers initiative. “Their disease continues to progress. But by the time we figure this out, the patient is so sick they’re not eligible for a clinical trial. If you could predict this lack of response, you wouldn’t waste their time on chemo that doesn’t work. You’d get them into a clinical trial and find out how to treat those tumors.”

Proteogenomics — which integrates the study of the body’s proteins with genomic sequencing — is a promising new approach for identifying chemo-resistant patients ahead of time. This new type of sequencing may also help identify new biological targets that can be used in patients whose tumors become resistant to chemo over time, Paulovich said.

“The cancer genome on its own doesn’t encode all of the biological information on the tumor’s behavior,” she said. “Those genes are blueprints for making proteins, and proteins are what really effect how the cancer cells behave. You have to study not just DNA but the proteins.”

Her team’s analysis will bring together improved preclinical models — both human cell lines and patient-derived xenografts (i.e., mice implanted with human tumor cells) treated with platinum chemo — with genomic and proteomic analyses. Their hope is that looking at the entire network of proteins and genes provides more answers to the riddle of chemotherapy resistance.

“We have better preclinical models than we used to have, and we also have better technologies for looking at the cancer cells — in terms of the genome and the proteome,” she said. “The hope is to bring the novel tools into play and see if we can have better luck than folks have had in the past.”

Paulovich’s team, which includes co-principal investigator Dr. Michael Birrer, a leading ovarian cancer researcher who heads the University of Alabama Comprehensive Cancer Center, has completed data collection on the preclinical models and is now starting its analysis. They’re also ramping up to do comparable studies in biopsies of human ovarian cancer.

“That’s the next wave,” she said. “Then we’ll combine the preclinical [mouse and cell line] information and [human] tumor analysis and see if we can identify any pathways and predictors. And then we’ll go on to validate anything that we find.”

Immunotherapy on the horizon?

Anderson, who works in the immunotherapy-focused Greenberg Lab, studies an approach known as T-cell therapy, where cells within the body’s immune system are genetically beefed up to target and kill cancer. So far, most of Anderson’s efforts have been on developing a mouse model with an immune system that has all the bells and whistles of a human immune system to test a revved-up T cell designed to go after a protein called mesothelin that’s overexpressed, or overproduced, in certain solid tumors. Next up: testing it on actual patients.

“We’ve shown that this strategy can work in a mouse model, that we have a tool that can recognize and induce tumor cell death,” she said. “That’s what we need to do before the clinical trial can start.”

Mesothelin, she said, is particular to solid tumors and is “very, very highly expressed” in pancreatic, certain lung and high-grade serous ovarian cancers.

“It’s overexpressed in anywhere from 60 to 90 percent of patients with these tumors,” she said. “If we can build a tool to recognize and specifically target cancer cells in those patients, that’s valuable tool for a large number of people.”

“What we’ve done by putting in this new receptor is given the T cells a way to distinguish between cancer cells and healthy cells more effectively,” she said. “CD8 T cells are naturally very good at killing infected cells and cancer cells when they can recognize them. It’s just that in many cases of cancer, there are not many T cells that can readily tell the difference.”

Anderson said plans are in the works to start a combination Phase 1-2 clinical trial in January 2019 using this approach with pancreatic cancer patients. Once they have adequate safety data, they will start to fold in ovarian cancer patients. And the researchers have a second tool in the works, a different receptor that would target WT1, another protein that’s overexpressed even more in high-grade serous ovarian cancers.

“The great thing about T cells is they have this amazing ability to migrate almost anywhere in the body,” she said. “If you infuse activated CD8 T cells in the blood, they can go anywhere. And when they recognize their target, they stay in place until they have eliminated all their targets. Some new data even suggests that T cells can divide in tissues, which may give this therapy an even greater advantage when it comes to outnumbering and eliminating tumor cells.”

Even better, she said, preliminary research indicates T-cell therapy may be much less toxic than chemotherapy.

A patient herself, Anderson said she understands the urgency of finding cures, but must balance that with the need for scientific rigor.

“It is frustrating how slow science moves sometimes, especially for patients who need something now,” she said. “But we don’t want to rush a tool and put someone through a treatment that will never work. You want to really thoroughly vet that tool so that what you are actually giving to people is real hope.”

This article was published by Fred Hutch News Service.