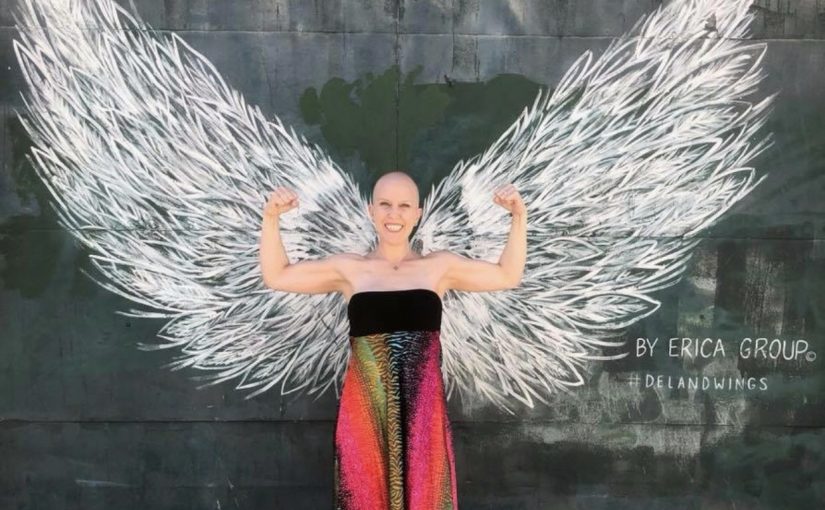 Most women dread turning 40, not me. The morning of February 9th, 2017, I hopped out of bed and headed off to teach my weekly cycling class. Health and fitness are two of my passions. I’ve been a group fitness instructor for 10 years. My family’s long line of health issues is what sparked my interest, by trying to find some way to beat what I believed was bad DNA. Weight issues, diabetes, heart issues, cancer – you name it my family had it. I wanted no part of it, so I began exploring changes to my lifestyle around my 30th birthday.

Looking back, some of my early symptoms included irregular and heavy periods. Sex was becoming more uncomfortable and I had experienced mild cramping for a few months leading up to my 40th birthday. I had recently started a new job, in addition to taking care of a 15-year-old daughter and two French bulldogs. My life was pretty busy, so I didn’t give a second thought to the constant fatigue. At night, I would have my husband lay with his leg over my pelvic region because the pressure seemed to help the cramping.

I decide to make an appointment with my PCP. They were booking weeks out so I had to wait. Of course the symptoms went away and I thought about cancelling my appointment, since I had just had a full physical approximately six months prior and was told I was in better shape than most of my doctor’s 20 year old patients. I convinced myself at my age I was probably going through early menopause, that’s what made the most sense to me.

On March 20th I finally met with a PA-C in my PCP office, as she was the first available. During my consult, I expressed to her the mild pain I was having and my other on-going symptoms. Initially, she wanted to just wait and have me come back in a few weeks if the pain had not resolved itself. I was annoyed because I had waited so long to get an appointment in the first place and as I mentioned already I was busy. I didn’t have time to keep coming back to see the doctor. So I pushed back and asked her to at least run some tests to see if I was experiencing early menopause. She ordered a transvaginal ultrasound and some blood work. One week later I went to the ultrasound appointment, and someone at my PCP office had enough good sense to order a CA-125 blood draw. After reviewing my ultrasound and blood work my PCP decided I should go see the ob-gyn for further examination. I met with her a few days later and she let me know she had sent my ultrasound images over to the oncology gynecologist, who did not seem very concerned about the two strawberry size cysts on my ovaries. The ob-gyn examined me and didn’t feel anything of concern. We went over my family history, which included colon cancer on my father’s side and ovarian cancer on my mother’s side. My maternal grandmother passed away at the age of 33 in 1957 from ovarian cancer. Still the doctor was not very concerned. She stepped out of the room and looked over my records including my blood work results. The ultrasound coupled with the CA-125 results prompted her to order a CT scan, chest x-ray and an appointment with the oncology gynecologist. My CA-125 at the time was 525.

Sill not believing there was any possible way I had cancer, I went for the CT scan and chest x-rays. A few days later, the ob-gyn called to tell me the scans showed I had cancer, probably stage 3. The oncology doctor would give me more details when I met with him. I sat on my bed and bawled for about 30 minutes. I called my father and could not get the words out to tell him what the doctor had just told me. I sent a text to my husband and asked him to come home right away.

My life got interesting real fast. When I met with my oncologist and he started telling me how we would do five rounds of chemo and then surgery, I was like whoa cowboy, slow down. Are you sure, I have cancer? I mean, I don’t feel like I have cancer, and besides, I am young and healthy. How can I have cancer? Very matter of factly he confirmed that I did have cancer, and it had spread to several areas, as shown by my CT scan. My next response was fine, how long is all of this going to take because I am very busy, I don’t really have time for cancer.

It seemed like the appointments were on-going. I was also dealing with the feeling of going from a healthy, normal 40-year-old woman, to a science experiment of sorts. Blood draws, being poked and examined. More tests were scheduled – a biopsy, more blood work, meetings with a nurse to discuss chemotherapy, meetings to look at wigs, appointments with a genetic counselor. It all seemed very urgent, but the whole process also moved slowly. I wanted the cancer out now. I wanted surgery right away. I didn’t understand the magnitude of what was really going on inside my body.

The initial diagnosis, low-grade serous carcinoma stage 3c. The biopsy results showed two possible types of cancer.  On September 20, 2017 I had a full radical hysterectomy, debulking, plus a diaphragm reconstruction due to the cancer fusing my liver and diaphragm together. Additionally, I received Hyperthermic Intraperitoneal Chemotherapy (HIPEC) which is a highly concentrated, heated chemotherapy treatment that is delivered directly to the abdomen during surgery. Unlike systemic chemotherapy delivery, which circulates throughout the body, HIPEC delivers chemotherapy directly to cancer cells in the abdomen. The doctors said I would be in the hospital for a week. I went home in four days (because, like I said, I’m busy). I received five more rounds of chemo and finished treatment January 2018.

For me, once I had a plan and knew where we were going, things became routine for me. One of the hardest parts is all of the unknowns. I remember being so frustrated with my doctor, at times, because I would ask questions about my long-term prognosis and he would tell me, we don’t know. How long did I have this? Where did it come from? The answers I hoped to get from genetic testing came up with nothing. I felt like, if at least they could say yes it is in your DNA, then I would have an answer. Even my type of cancer seemed to change through my diagnosis – I went from low grade to a high grade.

As I was blessed with an extremely easy time going through chemo and surgery my daughter forgot I even had cancer at times. My husband, on the other hand, became an online expert in medical terms, survival rates, treatments, shots, pain medications, and all of the other not so wonderful things that come with the territory of going through cancer with someone you love.

One year later and I find myself dealing with symptoms similar to PTSD. When treatment is over, you are sent back into the world as if nothing happened. Your hair starts growing back, and as you start healing, you now have time to reflect on everything. For me, it is as if I just ran this endurance cross country race, I’ve crossed the finish line, rang the bell and had the celebration. Now, I’m left staring at a scar that goes from the top of my belly all the way down to above my pubic area. I am physically tired and mentally exhausted. Every six months I go back to get my blood drawn and walk through the doors to the office, where a year ago, I was a regular. I can no longer wash my hands when I go to the office because the soap makes me nauseous. I associate the smell with the memories of receiving chemotherapy. When I get my blood drawn, I no longer have my spot, the one in the corner by the window, where most of the sunlight would pour in during the early morning hours. Now another woman sits in that same chair, hooked up to drugs that will hopefully save her life as well.

Too often, I hear stories from women who ignored the subtle symptoms or when they did finally get an appointment with the doctor, the doctor dismissed the signs. Several women with similar symptoms to mine have asked for a CA-125 blood test only to be told they are too young, or made to feel crazy for asking or even questioning the doctors authority. Patients already feel vulnerable sitting on a table in a small sterile room speaking to someone who probably has more education then they do. My message to medical professionals when dealing with patients is this: listen and ask questions, try to truly understand. Do they really know their family history, are they really telling you everything. Don’t be dismissive if someone is there, it is likely they have been suffering for quite awhile by the time they end up speaking with you. You could have chosen any career path, and I thank you for dedicating your life to this field. You may have many patients over the course of your career, they will probably all blend together at some point, however, you will have forever changed someone’s life.