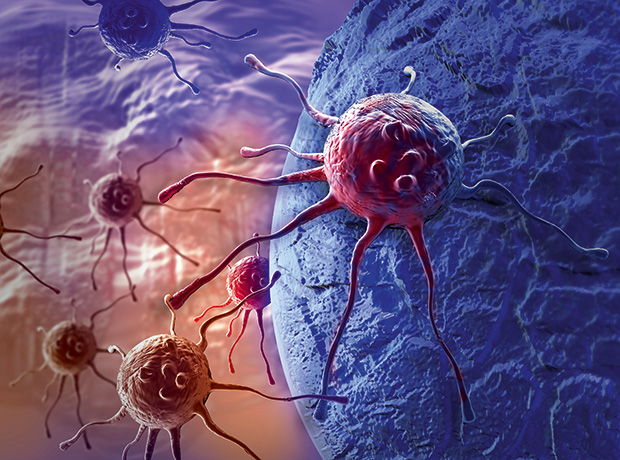 A brand new type of cancer drug that acts as a ‘Trojan horse’ to get inside tumour cells has shown promise in patients with six different cancer types.

In patients with advanced, drug-resistant cancers, over a quarter with cervical and bladder tumours, and nearly 15 per cent with ovarian and lung tumours, responded to the new treatment.

The innovative new drug, called tisotumab vedotin (or TV for short), releases a toxic substance to kill cancer cells from within. The results have been so positive the drug has now moved forward to phase II trials in cervical cancer and will be tested in a range of additional solid tumour cancers.

A team at The Institute of Cancer Research, London, and The Royal Marsden NHS Foundation Trust led a phase I/II global clinical trial of nearly 150 patients with a variety of cancer types who had stopped responding to standard treatments.

The study was published in The Lancet Oncology and funded by Genmab and Seattle Genetics.

The researchers found that a significant minority of cancer patients responded to the drug, with their tumours either shrinking or stopping growing.

Responses lasted an average of 5.7 months, and up to 9.5 months in some patients.

The main side effects reported from the study were nose bleeds, fatigue, nausea and eye problems – but halfway through the trial the researchers adjusted the protocol to reduce these eye-related effects.

TV is made up of a toxic drug attached to the tail end of an antibody. The antibody is designed to seek out a receptor called ’tissue factor’ – present at high levels on the surface of many cancers cells and linked with worse survival.

Binding to tissue factor draws the drug inside cancer cells, where it can kill them from within.

The trial initially recruited 27 patients to assess safety and establish the right dose, before expanding to a further 120 patients primarily to look at whether the drug was hitting the right target but also at what effect it had on tumours.

The majority of patients in the early trial had advanced stage cancer (spread locally or around the body) that had already been treated with, and became resistant to, an average of three different types of treatment.

TV is now being trialled in other cancer types including bowel, pancreatic, squamous cell lung and head and neck, as well as in a phase II trial as a second-line treatment for cervical cancer.

Biopsy samples taken at the start of the trial are currently being analysed for expression of tissue factor on tumour cells to see if it could be used as a marker to select patients most likely to respond to the drug.

“What is so exciting about this treatment is that its mechanism of action is completely novel – it acts like a Trojan horse to sneak into cancer cells and kill them from the inside. Our early study shows that it has the potential to treat a large number of different types of cancer, and particularly some of those with very poor survival rates.

“TV has manageable side effects, and we saw some good responses in the patients in our trial, all of whom had late-stage cancer that had been heavily pre-treated with other drugs and who had run out of other options.

“We have already begun additional trials of this new drug in different tumour types and as a second-line treatment for cervical cancer, where response rates were particularly high. We are also developing a test to pick out the patients most likely to respond.”

“We’ve seen major advances against cancer in recent decades, but many tumour types remain very difficult to treat once the cancer has begun to spread. We desperately need innovative treatments like this one that can attack cancers in brand new ways, and remain effective even against tumours that have become resistant to standard therapies.

“It’s exciting to see the potential shown by TV across a range of hard-to-treat cancers. I look forward to seeing it progress in the clinic and hope it can benefit patients who currently have run out of treatment options.”