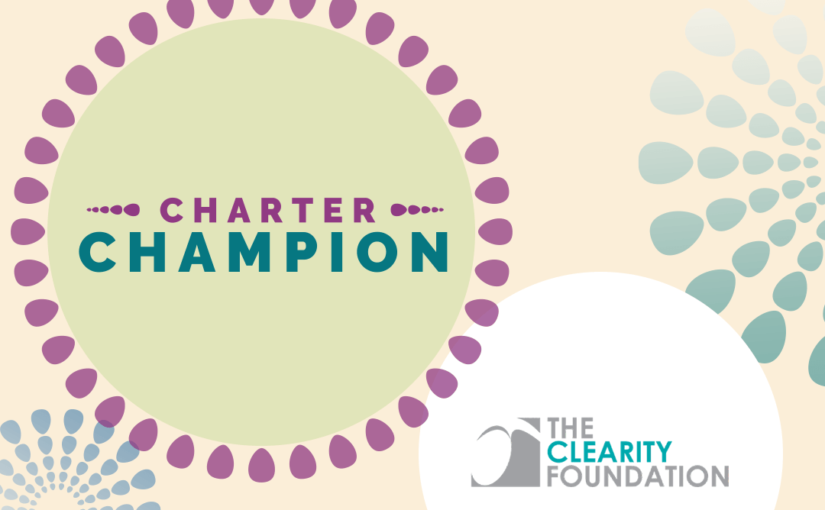 The World Ovarian Cancer Coalition has designated The Clearity Foundation as a Champion of the newly launched Global Ovarian Cancer Charter which seeks to improve survival and quality of life for women diagnosed with ovarian cancer through the implementation of six Global Goals.  The Charter builds on the Coalition’s landmark 2018 Every Woman Study™, and was formally launched at the Presidential Plenary of the International Gynecologic Cancer Society xDigital Annual Global Meeting on 12 September 2020.

The Clearity Foundation has been recognized as a Charter Champion for its commitment to the Goals of the Charter, and because it already is starting new important work that speaks clearly to one or more of the Global Goals, that  has the potential to inspire others. A full list of Charter Champions can be found on the Coalition’s website; worldovariancancercoalition.org.

The Clearity Foundation is recognized for the following goals; Best Possible Care with our Treatment Decision Support Program and Information and Support with our Steps Through OC Program.

“The Clearity Foundation firmly believes that women with ovarian cancer in the United States deserve the best possible therapies for their unique condition, and we are there to support them as they make treatment decisions. We are proud to support the Global Ovarian Cancer Charter as a Champion, particularly around access to best possible care and clinical trials.”

Worldwide, incidence of ovarian cancer is set to increase by almost 50% by the year 2050 and remains the most lethal of female cancers. While significant advances in treatment have been made in very recent years, women’s access to them is far from universal, especially in low- to middle-income settings, where the majority of women with ovarian cancer live.

Using the Charter as a framework for change, the Coalition is working with Charter Champions around the world to highlight inspirational projects or initiatives that may also foster global collaboration and sharing of good practice. Champions are mainly, but not limited to, patient and clinical organizations who have existing or upcoming programmes that speak directly to one or more of the Global Goals.  The aim is to reduce variations between regions and countries and ensure that women with ovarian cancer have the best chance of survival and best quality of life, wherever they may live.

“We are thrilled to be able to showcase such a diversity of Charter Champions. ” said Elisabeth Baugh, chair of the Coalition and CEO of Ovarian Cancer Canada, “We hope that their important work serves as an inspiration to collaborate and generate projects that speak to the Global Goals and, ultimately, to change the future of ovarian cancer for all women, no matter where they live.”

Ovarian cancer is the most lethal of the female cancers. Most women are diagnosed once the cancer has already spread, making it more difficult to treat. There are often delays in diagnosing the disease, as there is no early detection test, and symptoms are often confused with other, less severe, illnesses. Ovarian cancer is overlooked and underfunded – yet every woman is at risk of developing the disease. Ovarian cancer is cancer arising from the cells in and around the ovaries and fallopian tubes. It forms when there are abnormalities in normal ovarian cell growth. New cells grow unnecessarily, and old and damaged cells fail to die away, causing a build-up that forms a tumour or growth. Those growths have genetic mutations that cause them to multiply.

About the World Ovarian Cancer Coalition:

The World Ovarian Cancer Coalition is a not-for-profit organization that seeks to create a world where every woman with ovarian cancer has the best chance of survival, and the best quality of life – wherever she may live. With a stellar international Board of Directors, the Coalition builds on the success of World Ovarian Cancer Day (May 8) every year and the Every Woman Study as it looks ahead to further research, awareness raising, and policy work.