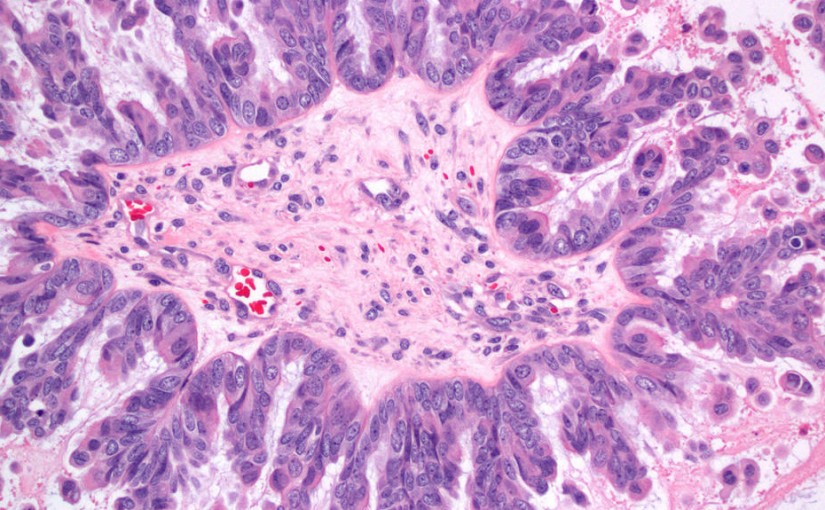 Promising new therapies are springing up to treat ovarian cancer, long one of the most deadly and hard to treat malignancies. The latest: An experimental drug from Tesaro, a small biotech company based in Waltham, Mass. The company on Wednesday released exciting clinical trial data for an experimental drug that’s meant to stop cancer cells from repairing themselves after they’ve been hit by chemotherapy.

Patients with recurring ovarian cancer who took the drug got as much as an additional 15 months with no growth in their tumors, as compared to a control group, the company said. The data hasn’t yet been peer reviewed or analyzed by federal regulators but the company press release on the results sent stock prices soaring.

The catch? Even with new drugs, ovarian cancer mortality is likely to remain high.

Patients who aren’t treated at well-trafficked oncology centers tend to receive suboptimal treatment for this confounding cancer, researchers are showing. They don’t always get therapies that could give them many more months of life. And as drug regimens become more nuanced and complicated, requiring genetic sequencing of tumors, this treatment gap is at risk of growing.

“It’ll get worse,” said Dr. Leslie Randall, an associate professor of gynecologic oncology at the University of California, Irvine. “As we come out with more novel treatments that are more complex to deliver, that disparity will only get worse.”

A 2015 study that examined ovarian cancer treatment and survival between 1996 and 2006 found that patients treated at comprehensive care centers certified by the National Cancer Institute had survival rates nearly double other women. Another study from UC Irvine found that black women received substandard care and had lower survival rates than their peers.

“Part of the disparity is that if patients don’t live in an area with a specialized cancer center, they’re not getting the cutting-edge standard of care,” said Dr. Thomas Morrissey, a gynecologic oncologist at Cleveland Clinic.

With a five-year, $1.9 million grant from the National Institutes of Health, researchers at UC Irvine are now delving deeper into ovarian cancer treatment disparities by race and socioeconomic status. They hope to develop better nationwide guidelines of care.

Because early symptoms are fairly benign — bloating and back pain — about 75 percent of women diagnosed with ovarian cancer don’t learn they have it until it has progressed to Stage 3. About 22,000 new cases are diagnosed each year, and about 15,000 women die of the disease each year in the United States.

“It’s hard to diagnose people with ovarian cancer, because it’s so rare. There’s no screening, no Pap smear, no mammogram that will easily tell you that you have ovarian cancer,” said Dr. Rebecca Liu, a gynecologic oncologist at University of Michigan Health System.

Many oncologists were bitterly disappointed this spring when a major trial of a promising new way to deliver chemotherapy failed to show benefits.

But the burgeoning field of pharmacogenomics — the study of how an individual’s genes affect her response to a specific drug — offers new hope, said Dr. Lee Shulman, the chief of the obstetrics and gynecology clinical genetics program at Northwestern University’s Feinberg School of Medicine.

To read this entire article by StatNews.com on The Clearity Portal, click here.