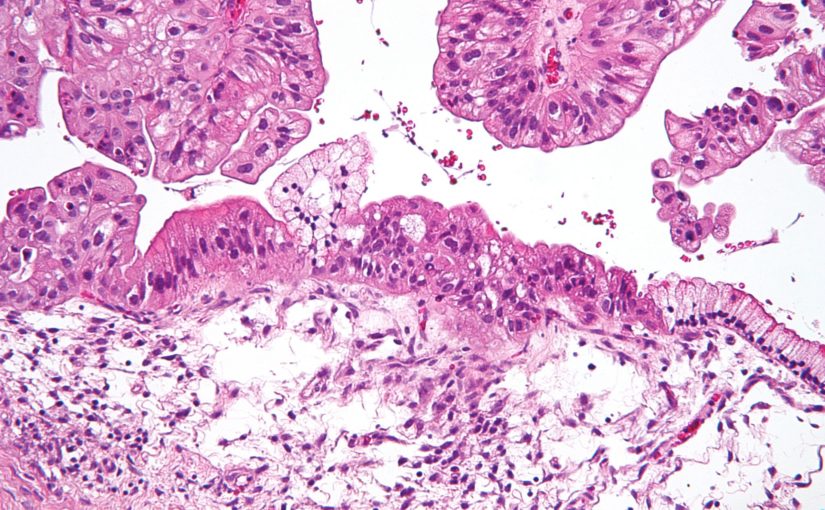 Around 1,500 Australian women will be diagnosed with ovarian cancer this year, and one woman will die every eight hours from this disease.

In a study published overnight in the journal Nature Communications, researchers from Peter Mac report that HGSOC cells are sensitive to a new class of treatment that causes cancer cells to stop growing and in some cases die, and could slow the growth of human ovarian cancers in mice.

The new treatment is based on the finding that cancer cells are addicted to the ability to make ribosomes—cellular factories that make the high levels of proteins required for their growth and survival—a discovery based on over 15 years of research led by scientists at Peter Mac and the John Curtin School of Medical Research.

“Our early studies revealed that cancer cells are exquisitely reliant on the ability to make ribosomes and this reliance can be exploited to selectively kill them,” says Peter Mac’s Prof Rick Pearson, senior author on the study.

“This was a ground-breaking finding, identifying a totally new approach to treating cancer and leading to the development of a new class of anti-cancer drugs that target ribosomes.”

Called CX-5461, this new ribosome-targeting therapy is currently in early phase clinical trials for the treatment of some blood cancers with promising results, which the researchers hope will extend into the treatment of solid cancers including HGSOC.

“We were particularly interested to see if CX-5461 would work in ovarian cancers, as we predicted it would work best in cancers that have defects in their ability to repair DNA, which includes many gynaecological cancers,” says study co-lead, Dr. Elaine Sanij, from Peter Mac.

Working with Prof Clare Scott at the Walter and Eliza Hall Institute, the Peter Mac team treated human ovarian cancers grown as tumours in mice with CX-5461, and found they could drastically slow tumour growth.

If combined with PARP inhibitors (PARPi), which have been recently FDA-approved for ovarian cancer treatment, they could dramatically shrink tumours, leading to durable tumour regression and prolonged survival.

Importantly, CX-5461 was effective even in an ‘incurable’ HGSOC that had previously developed resistance to standard-of-care chemotherapy and PARPi.

“We are very excited that this new treatment approach shows efficacy in some ovarian cancers that would not have responded to any other treatment,” says Dr. Sanij.

The next step will be to test whether CX-5461 is effective in treating women with HGSOC and in particular patients who have developed drug resistant disease.

“We believe this approach has great promise and are particularly encouraged by our early phase clinical trial of CX-5461 in patients with drug-resistant blood cancer that revealed that this therapy is well-tolerated and demonstrated anti-tumour activity,” says Prof Pearson.

This article was published by MDLinx.