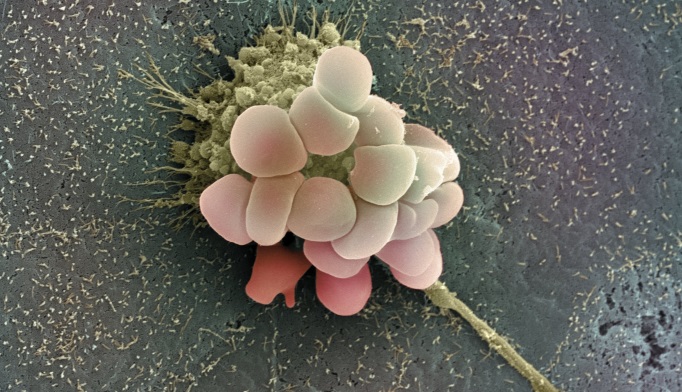 High-grade serous ovarian cancer (HGSOC) is characterized by a high level of intrinsic heterogeneity in the tumor-immune microenvironment that is modified by chemotherapy, according to findings published in Nature Genetics.

HGSOC, a common and aggressive histologic subtype of epithelial ovarian cancer, frequently presents with disease metastases at multiple sites. Previous genomic studies have revealed the presence of mutational intratumoral heterogeneity, as well as characteristics, such as a few somatic point mutations, often associated with low levels of immunogenicity in the setting of HGSOC. Nevertheless, the authors of this study noted that many questions remain regarding “the extent of [tumor microenvironment] heterogeneity, its underlying mechanisms and its impact on therapeutic response.”

In this study, HGSOC samples from 2 cohorts of patients were subjected to systematic immunogenomic analyses using whole-genomic sequencing (WES), immunofluorescence staining (IF), as well as analyses of the transcriptome, including mRNA-based assessments of tumor cellularity. In addition, some of the samples were also evaluated using T-cell receptor (TCR) sequencing.

Patient cohort 1 included 10 treatment-naive patients from whom 49 tumor samples were collected from the primary tumor, omentum, or other location during cytoreductive surgery that were selected based on presurgical MRI and positron emission tomography (PET)/computed tomography (CT) imaging analyses. Patient cohort 2 included 40 patients from whom 80 paired tumor specimens were collected before and after the administration of neoadjuvant chemotherapy with a platinum and taxane-based chemotherapy.

One of the key findings from investigations of patient cohort 1, which allowed for analyses of multiple tumor samples from the same patient, was that there was a high level of intrapatient variation between samples, with differences in the extent of T-cell infiltration into tumor ranging from 1% to over 10%.

Furthermore, immune-related and stromal gene signatures were more common in samples characterized by low tumor cellularity, whereas Myc and Wnt signaling were more common in high cellularity tumors. Specifically, across all patients in cohort 1, significant negative and positive associations between Myc and Wnt signaling were observed in low (P =.001) and high cellularity tumors (P =.006), respectively.

“These observations suggest that high Myc and Wnt signaling could be considered to be at least partially independent of tumor proliferation and may contribute to immune cell exclusion, as suggested by previous studies,” the study authors noted.

Immunogenomic analyses of matched pre- and post-chemotherapy tumor samples from patient cohort 2 revealed that chemotherapy was associated with TCR clonal expansions, and that the number of shared TCRs increased following chemotherapy suggesting that “chemotherapy may have induced or unmasked preexisting common (neo)antigens in these patients.”

Specifically, multivariate analyses comparing pre- and post-chemotherapy samples showed an increase in natural killer cells and the cytotoxic gene set following exposure to neoadjuvant chemotherapy only in samples that were site-matched, but not site-unmatched samples.

In commenting on these results, the authors stated that “the induced immunogenicity following [neoajduvant chemotherapy] was only unmasked after taking into account the [tumor microenvironment] heterogeneity, which acts as a confounding variable.”

“The tumor–immune microenvironment of advanced HGSOC is intrinsically heterogeneous” and “chemotherapy induces local immune activation, suggesting that chemotherapy can potentiate the immunogenicity of immune-excluded HGSOC tumors,” the authors concluded. Nevertheless, they added that such intrinsic heterogeneity presents “an important challenge for the successful application of therapies that target the [tumor microenvironment], such as checkpoint blockade immunotherapy.”