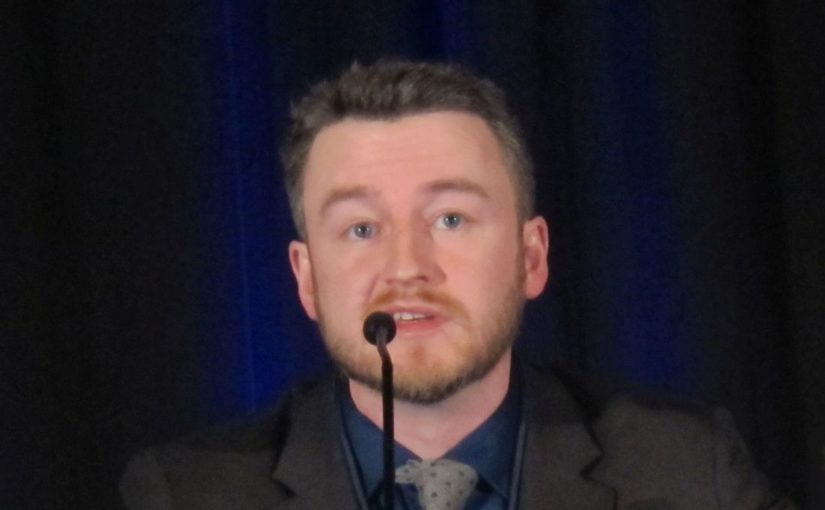 REPORTING FROM THE CLINICAL IMMUNO-ONCOLOGY SYMPOSIUM

ORLANDO – Intraperitoneal infusions of peginterferon alfa-2b and interferon gamma-1b, administered with or without autologous monocytes, showed antitumor activity and tolerability in heavily pretreated patients with ovarian cancer in a first-in-human study.The best response observed in the open-label, dose-escalation study was a partial response in 2 of 11 evaluable patients, with about a 30% reduction in target lesion size in both patients. An additional six patients had stable disease, and three had progressive disease.Christopher Browning Cole, MD, PhD, of the National Cancer Institute, Bethesda, Md., reported these results at the ASCO-SITC Clinical Immuno-Oncology Symposium.The primary objective of this study was to determine safety and identify the maximum tolerated dose (MTD). The study enrolled 18 patients with metastatic or unresectable ovarian cancer that was platinum resistant or refractory. They had a median age of 61 years and had received a median of five prior therapies.

The patients were enrolled in four dose cohorts in which they were treated every 28 days with intraperitoneal peginterferon alfa-2b (Sylatron) at doses of 25-250 mcg and interferon gamma-1b (Actimmune) at doses of 5-50 mcg, with or without autologous monocytes (75-750 x 106 cells).

In all, 15 patients were assigned to dose levels that included monocytes (dose levels 2, 3, and 4). Two of these patients were unable to tolerate apheresis and were reallocated, after two to four cycles of therapy, to “dose level 3-b,” which included 250 mcg of peginterferon alfa-2b, 50 mcg of interferon gamma-1b, and no monocytes, Dr. Cole said.

Based on overall safety and tolerability, the highest dose (250 mcg of peginterferon alfa-2b, 50 mcg of interferon gamma-1b, and 750 x 106 autologous monocytes) was the MTD. Six patients received this dose.

One of the partial responders received one cycle of the MTD, and the other received eight cycles of the lowest dose (25 mcg of peginterferon alfa-2b, 5 mcg of interferon gamma-1b, and no monocytes).

The median number of cycles patients received was 3.2, but “several patients stayed on treatment much longer than that,” Dr. Cole said. Two patients are still on study, one of whom has received 10 cycles to date.

Toxicities were “largely expected” based on prior studies, and included fatigue, nausea, and abdominal pain, Dr. Cole said. He added that monocyte collection by apheresis was “tolerated pretty well” by all but the two patients reallocated to dose level 3-b, and no grade 4 or 5 toxicities occurred.

There was one grade 3 peritoneal infection associated with a catheter used for monocyte administration. After a switch to port access for administration, no other such complications occurred, Dr. Cole noted.

Rationale and next steps

“There were three sets of studies that really provided the basis for [this trial],” Dr. Cole said, explaining that the first involves the “long-standing observation that ovarian cancer is really a peritoneal disease.”

“This has led to a lot of interest in directing therapies directly to the tumor in the peritoneum … and many of these trials have shown some really impressive results in terms of [overall survival] advantage in long-term follow up,” he added.

The third set of studies, including extensive preclinical data, shows that autologous monocytes can be activated by interferon-gamma and interferon-alfa to become tumoricidal, Dr. Cole said.

The findings of the current study support further assessment of this approach, he said, adding that exploratory analyses are ongoing to measure plasma cytokines at baseline and after therapy, specifically looking for cytokines secreted by activated monocytes.

In addition to interferon-gamma, several cytokines were present at detectable levels in the blood, including interleukin-6 and tumor necrosis factor–alpha, Dr. Cole noted.

He and colleagues seek to understand changes in immune cell populations induced by the therapy. They have developed a comprehensive set of panels to look at ligands and markers reflective of immune system activation, and “markers which might be targets for future therapies, potentially allowing us to develop some rational combinations, such as [programmed death-1, programmed death-ligand 1, and cytotoxic T-lymphocyte-associated antigen 4],” he added.

“What we’d like to do next is enroll an expansion cohort at the MTD to learn more about efficacy and immunomodulatory effects of this regimen, particularly … what’s happening with the immune system in the tumor microenvironment, so we’re going to perform tumor biopsies before and after therapy to learn a little more about that,” Dr. Cole said. “What we ultimately envision this regimen becoming is a platform to combine intraperitoneal cellular immune therapies in the innate immune system with other immunotherapies, such as systemic therapy targeting the adaptive immune system.”

The National Institutes of Health funded the study. Dr. Cole reported having no disclosures.