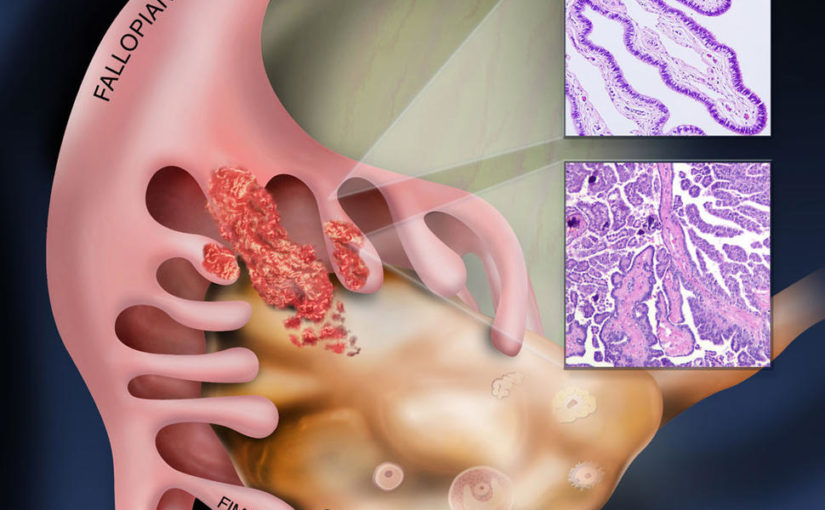 Although ovarian cancer is the fifth-leading cause of death from cancer in women, scientists don’t have a good handle on how it forms. Now a new study suggests that a microRNA—a molecule made by cells to turn genes on and off—may help kick-start a type of ovarian cancer called high-grade serous ovarian cancer.

Cells with high levels of the microRNA, called miR-181a, were pushed over the edge to becoming ovarian cancer, scientists who led the study found. It did this by turning off two important genes, they showed. These and other findings from the NCI-funded study were published June 26 in Nature Communications.

The researchers “made some really interesting discoveries with miR-181a, with respect to the initiation steps of ovarian cancer,” said Christina Annunziata, M.D., Ph.D., of NCI’s Center for Cancer Research. Dr. Annunziata, who is an investigator in the Women’s Malignancies Branch, was not involved in the study.

“One of defining features of ovarian tumors is a large degree of genomic instability,” said the study’s lead investigator, Analisa DiFeo, Ph.D., of the University of Michigan. That means chromosomes are destroyed, copied, or stitched together with other chromosomes, she explained.

But it wasn’t clear how ovarian cancer cells could survive with so much DNA damage. A key finding of the new study, Dr. Annunziata said, is that miR-181a helps cells survive with unstable genomes.

The Beginnings of Ovarian Cancer

Dr. DiFeo’s team has been hunting for a substance made by early-stage ovarian cancer cells that might help catch the disease earlier, when it’s easier to treat. But to find such a substance (called a biomarker), they first needed a better understanding of how the disease starts.

The current thinking is that ovarian cancer starts in fallopian tube cells that have a few gene mutations. Those abnormal cells eventually turn into a precursor of cancer, or precancer. Years later, the precancer becomes full-blown ovarian cancer.

MicroRNAs turn genes down by grabbing onto messenger RNA—the middleman between genes and proteins—and stopping protein production. In so doing, microRNAs help fine-tune the activity of genes. In fact, a single microRNA can regulate a thousand different genes.

Several microRNAs have been linked to the development, growth, and spread of different types of cancer. For instance, in 2014, Dr. DiFeo’s team found that women with ovarian cancer whose tumors had low levels of miR-181a lived more than 4 years longer without their cancer coming back than women whose tumors had high levels of the microRNA.

In the new study, the team saw a similar trend: Across 10,000 patients with 38 different types of cancer, those with tumors that had low levels of miR-181a lived several years longer.

Given their earlier work with miR-181a, the researchers decided to start there. First, they took human fallopian tube cells with certain mutations (those that are found in cells that turn into ovarian cancer) and engineered them to have high levels of miR-181a.

These cells grew on top of one another, formed tumor-like structures, and had genome instability—all typical hallmarks of ovarian cancer.

Cells carrying a nonworking microRNA didn’t form tumors in mice. But cells with excess miR-181a formed tumors that acted like human ovarian cancer. The tumors spread to the mice’s intestines, for example.

It’s rare to “transform a normal cell to a cancer cell with just expression of one microRNA. Typically, you need multiple [genetic changes] for transformation,” Dr. DiFeo explained. That goes to show that microRNAs are “small but mighty,” she added.

So how does a little piece of RNA turn cells to the dark side? The answer turned out to be miR-181a’s effects on protein production.

The levels of more than 400 proteins differed between cells with the nonworking microRNA and cells with excess miR-181a, the researchers found. One protein in particular, called RB1, caught their attention because it controls cell division and protects cells from genome instability. Low levels of RB1 are thought to help ovarian and other cancers grow.

Additional experiments confirmed that excess miR-181a lowered levels of RB1 in the fallopian tube cells. As a result, the cells had unstable genomes, grew out of control, and formed tumors.

But another question remained: How do cells with excess miR-181a survive with such unstable genomes? Cells normally self-destruct if their DNA is damaged beyond repair.

The answer, the researchers learned, is miR-181a’s effect on another protein, known as STING. STING’s job is to push the self-destruct button if it finds broken DNA floating around. But because excess miR-181a lowered levels of STING in fallopian tube cells, the cells avoided that fate.

“The microRNA is allowing the cells to stay alive,” Dr. Annunziata said.

Given miR-181a’s role in the early steps of ovarian cancer, it’s possible that the molecule could help doctors detect the disease early, Dr. DiFeo said.

If ovarian cancer is caught at an early stage, it can be cured, said Dr. Annunziata. “But when it’s advanced, it’s very difficult to cure. Less than half of the people with advanced ovarian cancer live longer than 5 years,” she said.

Early ovarian cancer may not cause any symptoms. When symptoms do appear, they may include:

However, these symptoms may be caused by conditions other than ovarian cancer.

Early-stage ovarian cancer causes vague symptoms, like bloating and feeling full quickly, that can easily be chalked up to something less serious. On top of that, it’s hard to find ovarian tumors using an ultrasound. And existing blood tests (such as for CA-125) can’t easily distinguish ovarian cancer from a non-threatening ovarian mass. For those reasons, most women with ovarian cancer are diagnosed when the disease is advanced.

“It would be awesome to have a biomarker blood test that can say you have ovarian cancer or you don’t,” said Dr. Annunziata. But determining whether miR-181a fits the bill would require in-depth studies of many thousands of patients, she added.

Dr. DiFeo and her team are taking the next steps to get there. For example, they’re checking to see if miR-181a can be found in the blood of women with early-stage ovarian cancer.

This article was published by the National Cancer Institute.