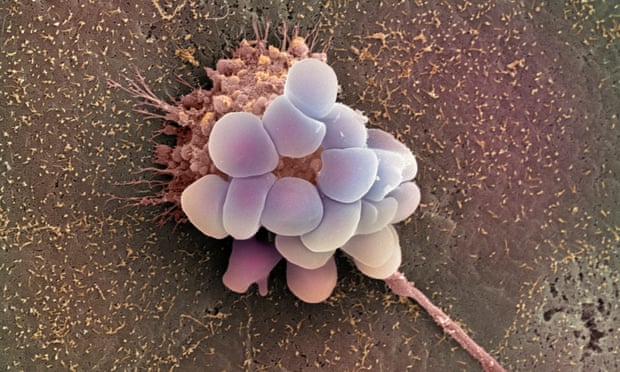 Researchers not sure apparent protective effect extends to progestin only products such as mini pill and implants.

Women who use modern forms of the combined pill are at a lower risk of developing ovarian cancer than women who don’t take hormonal contraception, research suggests.

The study backs up previous findings for older forms of the combined pill – an oral contraceptive that contains artificial versions of both oestrogen and progesterone. Modern forms of the pill contain different doses of synthetic oestrogen and different types of progestins, and are sometimes taken continuously.

“[For] women who are currently of reproductive age who are using contemporary hormonal products, this [study’s] findings are reassuring because it is continuing to show a reduced risk of ovarian cancer associated with combined oral contraceptives,” said Dr Lisa Iversen, first author of the research, although she admits the study does not prove cause and effect.

Writing in the BMJ, researchers from the University of Aberdeen and the University of Copenhagen, describe how they used a Danish database which brings together nation-wide information on individuals’ dispensed hormonal contraceptive prescriptions with other data, including their cancer records.

After removing cases where women had cancer or infertility before records began, the team were left with data for more than 1.8 million women who were aged 15-49 between 1995 and the end of 2014.

Overall, 86% of hormonal contraception use was down to the combined pill.

After taking into account factors including, age, number of children, education and a family history of either breast of ovarian cancer, the team found that women who had used hormonal contraception at some point had a 34% lower risk of developing ovarian cancer than women who had not, with a 42% reduction in risk for current or recent users, and a 23% drop for those who had not used it for a year or more.

The drop in risk among users, they add, was greater the longer women used hormonal contraception, and overall reduction was more pronounced for those who took the combined pill than those who used progestin-only methods – such as progestin-only pills, implants, or a progestin-releasing intrauterine device.

However further analysis cast doubt as to whether the link truly extends to progestin-only contraceptives.

Overall, they say that the use of hormonal contraceptives means the incidence of ovarian cancers recorded was 21% lower than it would otherwise have been.

While the research was funded by the pharma company Novo Nordisk, the authors say the company had no role in the study.

The study has limitations: for instance, the researchers stopped following women when they turned 50, so the impact on women as they got older was not be probed. According to Cancer research UK, 53% of ovarian cancer cases each year are diagnosed in women aged 65 and over.

While incidence rates vary from country to country, recent figures suggest that each year there are about 7,400 new cases of ovarian cancer in the UK.

Ovarian cancer is not the only issue that has been explored when it comes to hormonal contraceptives: among other research members of the same team have previously found women taking hormonal contraception have an increased risk of being treated for depression.

Dr Channa Jayasena, a clinical senior lecturer in reproductive endocrinology at Imperial College London who was not involved in the study, noted hormonal contraceptives – particularly the combined pill – have previously been linked to a small increased risk of breast cancer. However Jayasena stressed that the pill remains an important tool for women.

“[The study] shows that the combined pill which is thought of by patients and GPs as the one with more risks actually has some benefits too, over [progestin-only] methods,” he said.

Fiona Osgun, from Cancer Research UK, said: “The good news is that this confirms what we know, so there’s no need to swap your prescription. But the risk of other types of cancer can be affected, so if you’re thinking about starting or stopping the pill, make sure you speak to your doctor who can talk you through the pros and cons for your individual situation to help you make a decision.”

This article was published by The Guardian.