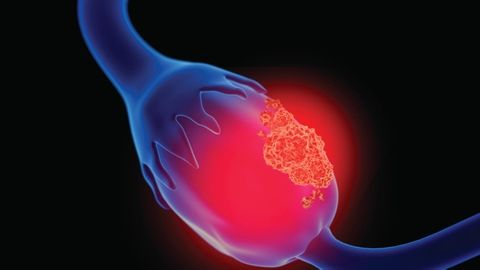 The addition of atezolizumab to chemotherapy and bevacizumab failed to significantly prolong PFS for women with newly diagnosed stage III or stage IV epithelial ovarian cancer, according to a phase 3 study in Journal of Clinical Oncology.

“IMagyn050 is the first randomized trial to provide efficacy and safety results for the addition of an immune checkpoint inhibitor to standard-of-care bevacizumab [Avastin, Genentech] in epithelial ovarian, fallopian tube or primary peritoneal cancer,” Kathleen N. Moore, MD, director of the Oklahoma TSET phase 1 program and associate professor in the section of gynecologic oncology at The University of Oklahoma College of Medicine, and colleagues wrote. “In the PCD4989g study, responses to single-agent atezolizumab [Tecentriq, Genentech] were limited to patients whose tumors showed high PD-L1 expression, whereas responses to atezolizumab plus bevacizumab were seen irrespective of PD-L1 expression in the small ovarian cancer cohort of the GP28328 study. This provided the rationale to evaluate outcomes in both PD-L1-positive and all-comer populations in IMagyn050.”

Investigator-assessed PFS and OS in the intention-to-treat population and among women with PD-L1-positive tumors served as co-primary endpoints. Objective response rate, duration of response, patient-reported outcomes, and occurrence and severity of adverse events serve as secondary endpoints.

OS results were immature at the time of data cutoff but showed no significant benefit with atezolizumab. Researchers observed 219 deaths in the intention-to-treat population and 116 deaths in the PD-L1-positive population.

Common grade 3 or grade 4 adverse events included neutropenia (21% for both groups), hypertension (18% with atezolizumab vs. 20% with placebo) and anemia (12% for both).

“IMagyn050 showed no significant PFS improvement in patients with PD-L1-positive tumors defined as [PD-L1 expression of 1% or greater]. However, in an exploratory analysis using threshold of [PD-L1 expression of 5% or greater] … the PFS HR was 0.64 (95% CI, 0.43-0.96),” the researchers wrote. “Relevant current evidence does not support adding PD-L1-targeted immune checkpoint inhibitors to the standard-of-care regimen for patients with newly diagnosed ovarian cancer.”

The results of IMagyn050, coupled with those of the JAVELIN-100 and JAVELIN-200 trials, indicate that immunotherapy findings in other tumor types, such as non-small cell lung cancer, bladder cancer or melanoma, cannot be extrapolated to ovarian cancer, according to an accompanying editorial by Panagiotis A. Konstantinopoulos, MD, PhD, researcher at Dana-Farber Cancer Institute, and Stephen A. Cannistra, MD, researcher at Beth Israel Deaconess Medical Center.

“Although several recent studies of immune checkpoint blockade in ovarian cancer have not met their primary endpoints, we should remain optimistic about the potential of immunotherapy in this disease,” Konstantinopoulos and Cannistra wrote. “Emerging technologies such as single-cell RNA sequencing and multiplexed single-cell imaging using cyclic immunofluorescence now enable the study of tumors and their microenvironment at the single-cell level, thus providing unique mechanistic insights into response and resistance to immunotherapy.”