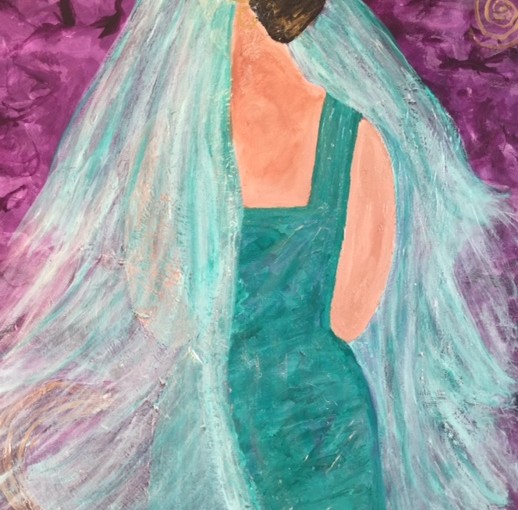 As an amateur artist who paints to heal, I see the various stages I’ve been through in my ovarian cancer journey hanging on the walls surrounding me. Some paintings are full of joy as when I first learned I was NED (no evidence of disease) and painted a woman joyously dancing with NED. Others depict my loneliness and fear as when a small pink figure swims in a tumultuous ocean full of dark swirling waves and troughs leading to nowhere. Still others like the one entitled “The Veiled Woman in Teal” earlier puzzled even me.

She is dressed in teal because I’m slightly obsessed by the color that represents ovarian cancer. But why is she veiled in white? Is it a wedding veil symbolic of forsaking all others forever? Is she using the veil to shield her face from the eyes of others? Or is she looking through the veil so she doesn’t have to acknowledge the world outside? What was I thinking when I painted this figure? I honestly didn’t know when I painted it in 2010, but I have a clearer idea today of the feeling I was trying to convey.

When I was first diagnosed with high grade serous IIIC ovarian cancer in 2008 and told by my surgeon I had a 25% – 33% chance of living 5 years, I was shocked and horrified. I read all I could about the disease and quickly understood no cure existed! As I sought a second opinion, I was told that the extended course of treatment I chose wouldn’t make a difference because I’d die from the disease regardless of what I did or didn’t do. That thought made me feel very vulnerable

But somewhere deep inside me, I refused to accept this notion and set out a plan for living as long and as well as I could. I sought yet another opinion and finally found a gynecologist oncologist who acknowledged no cure for ovarian cancer existed, but hoped one day there would be.

In 2010, I learned about molecular profiling and the promise it held for matching an appropriate treatment to a tumor’s molecular make up. The Clearity Foundation ran a profile on my tumor that indicated the best drug I would respond to was Avastin. Luckily for me, because I had a son in oncology who knew about the promise of Avastin proposed by the GOG 218 clinical trial, I followed that trial’s protocol. I had 8 rounds of Carbo, taxol and Avastin followed by an additional year of Avastin. I was NED after this initial treatment.

Yet at that time, I took the first step in carrying out my long term plan. I knew I believed in my Dr. (who was the scientific advisor to the Clearity Foundation) and after Dr. Laura Shawver called me and gave me my Clearity report, I believed in her and the science she brought to the treatment of ovarian cancer. I intended then, as I do now, to follow their suggestions.

For 12 years, my husband and I lived half of the year in Colorado (our home state and where our children and grandchildren are) and 6 months in the Ca desert. However, I knew if I recurred, I wanted to live close to both my gynecologist/oncologist in LA and the Clearity Foundation in La Jolla. Somehow I have always known, recurrence isn’t an “if, but a when!”

Luckily for me, I have remained NED over eight years. I became an advocate in Colorado by supporting the Colorado Ovarian Cancer Alliance COCA, and in California, by supporting The Clearity Foundation. I also serve on a committee for the DODOCRP (Department of Defense Ovarian Cancer Research Program) ranking proposals for ovarian cancer research funding. Over the years I have became increasingly confident that I can, and will, live to be an 80 year old plus ovarian cancer survivor.

But just as that figure in the teal dress veiled her face, I’ve managed to hide from myself my ongoing vulnerability and delude myself into thinking I am cured of ovarian cancer. So I was ripe for the yet another hurdle in my ovarian cancer journey!

In September 2016, I had an apt for a routine CT/PET scan with my Doctor in California. The minute my Doctor entered the examination room to explain the scan, I knew from the look on her face and the lack of her usual hug and greeting  to my husband and me that something was wrong. She calmly explained that an area on my PET scan showed some metabolic activity around my incision and she was eager to feel my stomach.

She probed hard, but felt nothing. She said the shadow could be a “stitch granuloma” left over from my debulking surgery but why it hadn’t shown up before in 8 years was a mystery. She said we’d see what my current CA-125 was and decide on a course of action. If it remained normal, we’d treat it as if it were not anything until I had symptoms. Later that day, my CA report came back at 4, the same as it was February 2016.

All ovarian cancer survivors know that their cancer can return anytime even 20 plus years later. So what does one do to cope with the “veiled threat” always there? I’ve needed several months alone to adjust my response to my new reality. I’ve painted out my fears and disappointment.

I know, too, I’ll fret until I have my next scan, perhaps in the spring. But I feel fine, all my other organs are “unremarkable,” I have no genetic propensities to other cancers, I have a great Dr., and I consider the Clearity Foundation my home away from home. I have access to experts in ovarian cancer care as well as the support of a community at Clearity and my own personal network. So, I resolve to move forward in 2917 to enjoy my life and do the same advocacy work I’ve been doing.

I share this very new and personal development in my own ovarian cancer journey with other survivors because I admit that the fear of recurrence never goes away and I will alway feel vulnerable. I share it with caretakers, families and supporters because I know how difficult we survivors can be to live with at times like these. Precisely because we feel so vulnerable for recurrence, we can easily sink back into fear and insecurity.   We don’t mean to be needy, but when we are reminded that “ovarian cancer is really forever,” we are always shocked anew!

But, hopefully, throughout our respective cancer journeys, we can resolve to move forward!