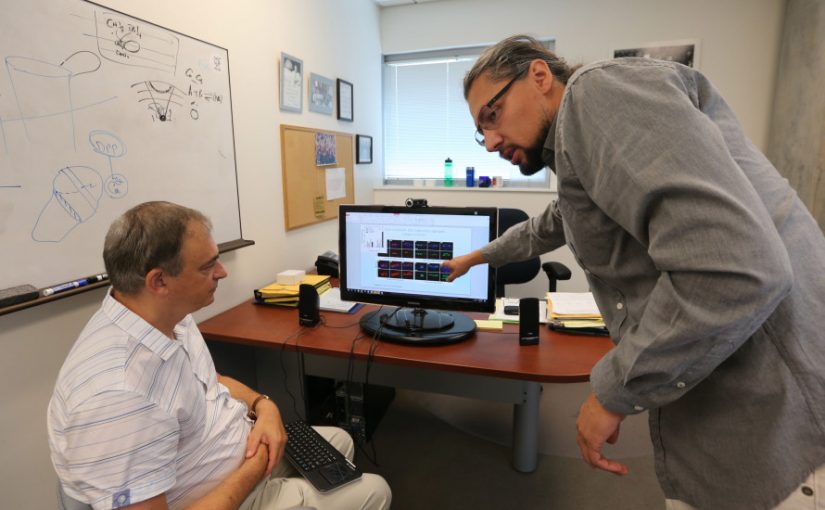 A pair of UC Riverside researchers say they have found a mechanism for blocking the spread of ovarian cancer, one of the deadliest cancers for women.

Recent University of Notre Dame transplants Mark Alber and Oleg Kim, along with a team of researchers, published a study in Oncology Times in July that detailed how they used a monoclonal antibody named GC-4 to block a protein responsible for allowing ovarian cancer cells to latch onto and penetrate other cells. That’s how the disease spreads to other parts of the body.

Alber and Kim, who both arrived at UCR a year ago, plan to work with the City of Hope, in Duarte, to do further study with human patients and hopefully develop an effective drug.

What may be a little surprising is that neither Alber nor Kim are biologists. They both work in UCR’s mathematics department.

Their involvement in medical research is an example of the cross-disciplinary push by some universities over the past 10 to 15 years, in which researchers in seemingly disparate areas combine their talents to address a problem. UCR has been emphasizing cross-disciplinary work in recent years.

Alber and Notre Dame biochemist M. Sharon Stack led the study. The two collaborated while Alber was still at that university. He’s been doing similar biological-oriented work since 2000, he said.

“When people think about mathematics, they think about calculus,” he said. “But beyond that is mathematical modeling. We look at the biological processes. We talk to biologists and medical doctors nonstop. We come up with an understanding of what’s important and what’s not.”

He and his colleagues use that information to show and predict how biological systems work — allowing for a degree in randomness inherent in those systems.

In the case of the ovarian cancer study, they modeled the behavior of two types of cadherin, a protein, and how cells with the protein interacted with abdominal tissue. One type, N-cadherin, allows cancer cells to invade healthy tissue. Cancer cells with E-cadherin, a different form of the protein, aren’t able to break through the walls of the healthy cells. The GC-4 antibody made N-cadherin carrying cells behave as if they had the E-cadherin protein. They failed to metastasize.

The same protein also is present in other cancers, such as breast cancer.

Alber said stopping the spread of ovarian cancer is especially important because the disease has few early symptoms and has often metastasized before it is discovered.

Kim and Alber also are researching blood clots, using computer models to show how clots form and how they can become problems. Blood clots typically form when a blood vessel has been injured, patching any break in the vessel wall. If the clots become too large, they can block the blood vessel. If this happens in the brain, it can result in a stroke. Pieces of clots can also break off into the bloodstream, potentially causing an embolism.

“We’re looking at the mechanical stability of clots,” Alber said. “We look at what are they made of and how different components interact with each other and how it can affect the blood flow.”

On his office computer, Alber played a computer simulation of a blood clot forming, with streaming particles gradually collecting on the floor of a blood vessel.

“It’s all clusters of particles interacting with each other,” Alber said. “What made this (modeling) possible was the huge success in molecular imaging.”

Without a supercomputer to do the math, such work would not be practical, he said.

He and Kim see a future in the kind of cross-discipline collaborations they have used in their work. The two are developing the soon-to-be-opened Center for Quantitative Modeling in Biology.