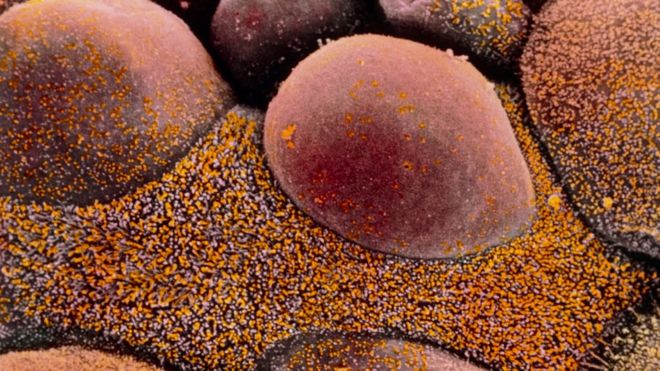 Simplifying the way ovarian patients are tested is a “win-win” that saves both lives and money, a study shows. Testing their DNA should identify the most effective drugs and finds out if other family members are at risk.

Fewer than a third of patients are currently tested, but the team at the Institute of Cancer Research (ICR) in London made it easier for women and increased uptake to 100%.

Experts said the findings were an important step.

The focus of testing is a set of genetic mutations which run in families called BRCA – they cause 15% of the 7,100 ovarian cancers detected in the UK each year.

Knowing if the patient is in the 15% helps improve treatment as some chemotherapy drugs are more effective against tumours caused by BRCA mutations.

And cancer drugs such as PARP inhibitors work only in women with BRCA mutations.

A tumour that is positive for BRCA is also an early warning to other family members that they may be at risk of developing ovarian, breast or prostate cancers.

Testing currently involves getting an appointment with a separate genetics team after being diagnosed by a cancer doctor. The average wait is 12-15 weeks, the researchers say, and only a minority of women go for it.

The ICR team used advances in genetics testing – which is getting faster and cheaper – to offer screening with the original cancer doctor.

Prof Nazneen Rahman, who led the trial, told the BBC News website: “It cuts off all that time on a waiting list and extra consultation. The feedback from patients has been overwhelmingly positive.”

The results of the trial, published in the journal Scientific Reports, showed all patients had screening and got their results in a quarter of the time. It also estimated the National Health Service would save £2.6m a year if it changed the way testing was offered.

Prof Rahman added: “There would be 283 fewer cancers and 77 fewer deaths a year – it really does save lives and money.

“It’s very unusual to get a win-win all round that allows us to help more people but doesn’t cost more.”

It is likely the approach would also work for other cancers, such as those in the breast.

Prof Paul Workman, the chief executive of ICR, said: “Twenty years ago the BRCA2 gene was identified at the ICR. This study is an excellent example of how science such as this can be turned into something very practical that can improve the patient care and save lives. We hope the new model for genetic testing will be rolled out across the NHS.”

Alexandra Holden, from the charity Target Ovarian Cancer, commented: “Any improved access to genetic testing for all women with ovarian cancer is an important step.

To read this article, originally published by BBC News, on The Clearity Portal click here.