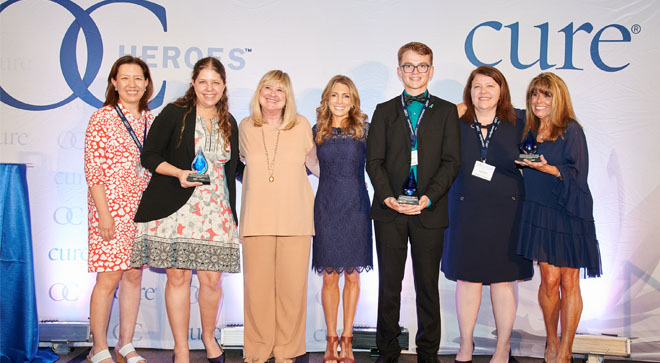 By Katie Kosko and Jessica Skarzynski

The importance of teamwork between patients and their caregivers was a common theme at the second annual Ovarian Cancer Heroes event held in Honolulu, Hawaii.

A cancer diagnosis can be a very lonely thing. But patients should remember that they are never truly alone on their journey when they have a care team of nurses, doctors, family and friends to reach out to when things get tough.

That sentiment was one shared by guest speaker Shannon Miller as well as the three individuals — a gynecologic oncologist, nurse and advocate — who were named Ovarian Cancer Heroes by CURE last night during the second annual event held in Honolulu ahead of the 50th Society of Gynecologic Oncology (SGO) Annual Meeting on Women’s Cancers.

To help honor this year’s winners for their innovative research and dedication to raising awareness for patients with the disease, seven-time Olympic gymnast and ovarian cancer survivor Shannon Miller took the stage to kick off the evening and shared her own story of how she found hope in her team when she reached her lowest point. After her treatments wore her down beyond her expectations, Miller recalls “I remember thinking, ‘I don’t think I can do this.’ And at that moment, a nurse walked in. Suddenly it all came flooding back to me: I was not alone.”

“I had a team. Sure, there was a lot more medical staff on this team, but it was also friends and family and neighbors willing to step in and help out,” said Miller to a crowd of more than 100 gynecologic oncologists, nurses, advocates, patients and loved ones. “I had a team. But I had to realize that I was a part of that team.”

Miller holds more than 100 medals — 59 international and 49 national — and is the only female athlete to be inducted into the U.S. Olympic Hall of Fame twice. But after retiring from the competition, she was faced with a different type of challenge — fighting for her life. In 2011, Miller received a diagnosis of stage 2 germ cell ovarian cancer, which is a rare form of the disease. She was a new mother to a 1-year-old and had recently launched her company Shannon Miller Enterprises with Shannon Miller Lifestyle: Health and Fitness for Women. The focus to help other women prioritize their health now became Miller’s main mission for herself. Her treatment regimen consisted of surgery and nine weeks of aggressive chemotherapy. Also aware that the treatment could affect her fertility, Miller chose to freeze her eggs. She experienced hair loss, extreme fatigue and neuropathy. Miller is now cancer free.

“I tell athletes that you don’t win Olympic medals alone,” said Miller. “You have an incredible team. I had amazing coaches, wonderful, supportive parents, and a community of doctors and a medical team to patch me up and get me back out on the floor.”

“As the nausea and fatigue of my treatments took hold, I had to learn to accept and even ask for help,” said Miller. “I wanted to do it all, but I realized I didn’t have to.”

Heroes Come in Many Forms
Paula Anastasia, RN, MN, AOCN, was called first to receive her award. An oncology nurse for more than 35 years — over 25 years specifically as a gynecologic oncology clinical nurse specialist — she has devoted her care to patients and advancing science. Anastasia, who currently works at the David Geffen School of Medicine at UCLA in Los Angeles, has also written items for peer reviewed nursing journals and is a national public speaker on ovarian cancer, chemotherapy symptom management and survivorship issues.

But her compassion as described by her nominator, Nancy Jo Bush, a fellow advanced oncology nurse and ovarian cancer survivor, may be what best sets her apart from others in her field. “My personal nickname for Paula was naming her one of my dearest ‘Tear Catchers’ during my own journey with ovarian cancer,” said Bush. “Putting all the other accolades aside, Paula is a loving, tender, caring, compassionate and committed nurse who instills in her patients the strength, courage and perseverance to not only survive their ovarian cancer experience but to thrive when reaching a ‘new normal’ of survivorship.”

Ryan Mitstifer Walton’s life was forever changed before he even entered the world. His mother, Meredith Mitstifer, had been trying to get pregnant but with no luck. She and her husband decided to undergo in vitro fertilization. However, during a routine exam before starting the process, her health care team found a mass on one of her ovaries. She waited to see if it would shrink, but the mass doubled. Before surgery she was asked to take a pregnancy test. After all this time, she got a positive test. She was forced to make a decision: abort the baby or continue a risky pregnancy and hold off treatment. She opted to keep her baby, beginning treatment for clear-cell epithelial ovarian cancer after giving birth.

Fast forward 16 years and Ryan, a sophomore in high school, is now an advocate not only for his mother but for all women with ovarian cancer. He is an active volunteer for the National Ovarian Cancer Coalition (NOCC) and participates in run/walks to break the silence on ovarian cancer. He also presents on the disease within his school. His reason for his work is to ensure no child loses their mother to cancer.

“Working in ovarian cancer advocacy, I have met some of the strongest, most passionate women who fight every day to make a difference in this disease,” said Megan Murphy, director of Business Development & Operations for NOCC, and Mitstifer Walton’s nominator. “But then back in April — I met Ryan. I had heard that he gave local presentations, worked at events and health fairs. But none of that knowledge could have prepared me for his presentation at the National Ovarian Cancer Coalition’s conference. Ryan is a hero — not just to his mother, and his family, but to all mothers and all women who have experienced this disease.”

The third Hero to take the podium was Shannon Westin, M.D., M.P.H., who focuses her efforts on developmental therapeutics and the use of biomarkers to predict response and recurrence in gynecologic malignancies. At The University of Texas MD Anderson Cancer Center in Houston, she serves as director of early drug development and phase 1 trials in her department and is a co-director of the Ovarian Cancer Moonshot, which is a collaborative effort to accelerate the development of scientific discoveries into clinical advances for women with the disease. “Dr. Westin brings a passion for her patients’ well-being and a drive to bring new treatment options forward for all women with ovarian cancer,” said Clayton R. Boldt, Westin’s nominator and colleague. “Having daily seen the impacts of this disease, she continues to work tirelessly to improve the lives of all patients.”

Westin also serves on four American Society of Clinical Oncology committees and is an active member of the International Gynecologic Cancer Society and SGO. Her dedication to ovarian cancer is also personal. She lost her mother to cancer at the age of 17. “Dr. Westin knows the fear and distress that comes with a cancer diagnosis, wondering whether a beloved family member will be able to beat the disease. (And) she has devoted herself to easing that distress for her patients and their families,” said Boldt.

Moving Forward Together
The Ovarian Cancer Heroes event was hosted by CURE Media Group and sponsored by Tesaro, developer of Zejula (niraparib), an oral PARP inhibitor, which is approved for the maintenance treatment of adult patients with recurrent epithelial ovarian, fallopian tube or primary peritoneal cancer who are in a complete or partial response to platinum-based chemotherapy.

In the field of ovarian cancer, said Stefanie Nacar, Executive Director of Coprporate Affairs and Brand PR at TESARO, “Progress is happening. Let’s continue to move forward together.”

Erik Lohrmann, vice president of CURE Media Group, echoed Nacar’s thoughts with his own: “Nights like this one showcase what can be accomplished when we work together to advance the field of cancer research and advocacy. We at CURE are inspired by the work you do and are honored to be able to celebrate you in this way.”