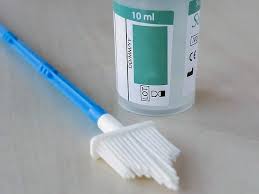 A sample obtained from routine Papanicolaou (Pap) tests used for cervical cancer screening can be subjected to a multiplex panel test, dubbed PapSEEK, to determine whether the sample is positive for endometrial or ovarian cancer, two gynecologic cancers for which early detection has been a problem.

The new test is described in a study published online March 21 in Science Translational Medicine.

“PapSEEK adds another dimension to screening for gynecologic cancers,” write the authors, led by Yuxuan Wang of the Ludwig Center for Cancer Genetics and Therapeutics and the Sidney Kimmel Comprehensive Cancer Center, Johns Hopkins University School of Medicine, Baltimore, Maryland. Earlier this year, some of these researchers reported on the CancerSEEK test for eight common cancers, as reported by Medscape Medical News.

The PapSEEK test includes a mutational analysis of 18 genes using a multiplex panel and an analysis for aneuploidy.

Using different approaches to collect the Pap sample, the test identified endometrial cancer in 81% to 93% of cases and ovarian cancer in 33% and 63% of cases, with nearly no false positive results (0 to 1.4%) in healthy control persons.

“Our study lays the foundation for evaluating PapSEEK in a large prospective study,” Wang and colleagues write. They indicate that the most natural cohort for this test would be women who are at high risk for gynecologic cancers, owing to hereditary factors, obesity, or symptoms such as postmenopausal or uterine bleeding.

The utility of PapSEEK lies in its ability to identify difficult-to-detect endometrial and ovarian cancers at an early stage using a sample obtained from a routine Pap test, they comment. Current tests, such as transvaginal ultrasound, are invasive and result in many false positive results. Moreover, they are neither ideal nor recommended as a screening tool in the general population, Wang and colleagues point out.

Details of the PapSEEK Test

Wang and colleagues analyzed samples from 1658 individuals — 656 with endometrial or ovarian cancer, and 1002 healthy control persons.

They took advantage of the fact that endometrial and ovarian cancer cells collect in the endocervical canal, where they can be collected with a Pap brush. The brush is then dipped into a preservative fluid, and cells are applied to a slide for a cytologic examination of the classical Pap smear and for the PapSEEK test.

They then used two separate methods to increase the sensitivity of the test. In one approach, they used a “Tao” brush that allows for interuterine sampling closer to the anatomic sites of the tumor. In the second approach, they undertook mutational analyses of circulating tumor DNA obtained from liquid biopsies.

Of the 328 women with endometrial cancer, 81% Pap brush samples tested positive. Of these, 78% were cases of early-stage cancer, and 89% were cases of late-stage disease. PTEN and TP53 were the most common mutations, seen in 64% and 41% of samples, respectively.

Wang and colleagues found aneuploidy in 38% of endometrial and 11% of ovarian Pap brush samples.

Of the 714 women without cancer, only 1.4% of samples were positive with the PapSEEK test, providing a high specificity of ~99%.

Tao brush samples were collected from 123 patients with endometrial cancer, 51 patients with ovarian cancer, and 125 women without cancer.

Using the PapSEEK test for Tao brush samples, the detection rate increased for both endometrial (93%) and ovarian cancer (45%). Mutations were consistent with those seen in Pap brush samples. Remarkably, none of Tao brush samples of the women without cancer tested positive — a specificity of 100%.