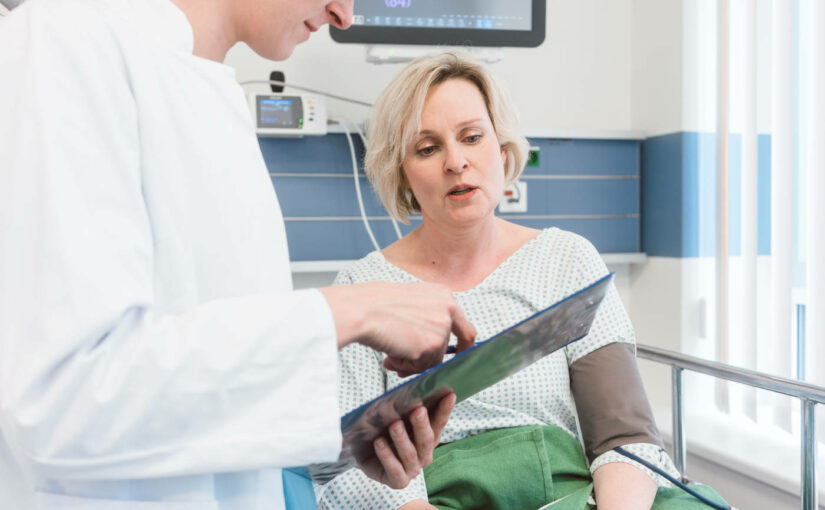 A new type of technology can capture stray ovarian cancer cells from a simple blood test and successfully predict cancer in people who have a lesion or cyst in the pelvic region, according to a new study by a Wilmot Cancer Institute physician/scientist.

Nearly 200 local people participated in the study, which was led by Richard Moore, M.D., director of the Wilmot Cancer Institute’s Gynecologic Oncology program at the University of Rochester Medical Center. Results were published on Sept. 8, 2022, in the high-impact Obstetrics & Gynecology “Green” journal.

One of those local participants, Toni Masci, 51, of Fairport, took part in Moore’s study by providing blood samples for analysis. She had an ovarian cyst that burst — only to find out that a large tumor was also in her abdomen. She was treated with surgery and six rounds of chemotherapy in 2017 for stage 1 ovarian cancer, and just celebrated the milestone of five years in remission.

“I feel lucky to be part of this,” Masci said. “As most people know, ovarian cancer usually doesn’t get detected early. If Dr. Moore hadn’t been doing this research, we might not have had this advance and I might not be here.”

Currently, there is no routine ovarian cancer screening method available for people who do not have symptoms or a known lesion. And yet, the new technology, called a “liquid biopsy,” developed by United Kingdom-based ANGLE PLC, and the URMC team at Wilmot, advances the field in a couple of important ways, according to the study:

It confirmed for physicians quickly and accurately that cancer was present in patients who were scheduled for surgery or other procedures. The detection enabled physicians to classify which patients needed immediate care from a specially trained gynecological oncologist to improve survival.

The study analyzed gene expression from captured cells in blood and evaluated 72 different gene transcripts and seven blood biomarkers related to ovarian cancer (including CA125). From this collection, the study identified nine gene transcripts and four biomarkers that were useful for detecting cancers. They were used to develop an algorithm known as MAGIC (Malignancy Assessment using Gene Identification in Captured Cells). The algorithm achieved a sensitivity of 95 percent and an accuracy of 83 percent for detecting ovarian cancer.
In the clinical trial, MAGIC also was able to detect ovarian cancer in early and late stages. Early-stage detection is critical for survival and difficult to achieve. And, the test picked up other types of cancer that had spread to the pelvic region or originated there.

“This is an important step forward for the detection of ovarian cancer in patients with a pelvic mass,” Moore said. “The fact that we can capture circulating tumor cells and analyze them from a simple blood draw is extremely exciting.”

Being able to find circulating tumor cells is the key, Moore said. These are rare, living cells that break off from the original tumor. They have an estimated ratio in the blood of one in 100 million to one in one billion. The technology captures the rare cells and allows for genetic analysis in a single tool within a couple of hours.

Currently, if a person has a suspicious lesion, surgery is necessary to diagnose ovarian cancer, and annually, more than 200,000 people in the U.S. are in this situation. A non-invasive test that predicts malignancy beforehand would enable people with the highest risk to have surgery done by an oncology specialist with greater experience and surgical volume for these types of cases, Moore said.

Ovarian cancer is most often found in people of middle-age or older. In the Wilmot study, the mean age of participants was 56. Of the 183 participants, 42 were found to have ovarian cancer, which is 23 percent. The technology also discovered that 20 other participants had non-ovarian cancers.

Masci, a U.S. Navy veteran and esthetician at a local salon, was 46 years old in January 2017 when her cancer was diagnosed.

“I was in such shock,” she said. “Looking back, I did have some symptoms: bloating, my back hurt, weight loss, and when I would sit down to eat I would feel full right away.”

She enrolled in the study a month later, and Moore performed her ovarian cancer surgery.

“I had wonderful care from everyone at Wilmot,” Masci added, “but I can’t say enough good things about Dr. Moore. He needs to clone himself a million times.”

Ovarian cancer symptoms can be vague, such as gas and bloating, but there are some that should not be ignored, Moore said: pelvic pain or pressure, feeling full quickly after eating, vaginal discharge or abnormal bleeding, urgency to urinate frequently, fatigue, upset stomach, pain during sex, constipation, or menstrual changes. Because ovarian cancer is most often diagnosed in later stages, it’s important to act swiftly if symptoms persist or a growth is detected.