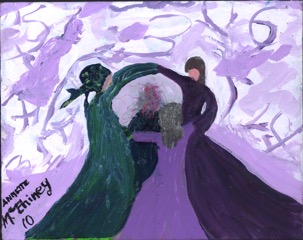 All my life women have surrounded me— so I am very comfortable in their presence. However, when I received my diagnosis of III C Ovarian Cancer in 2008, I felt like a lone rigid pillar of ice. I didn’t even know another woman who had ever had this dreaded disease. The female gynecologist who diagnosed me immediately recognized my fears of standing alone against this disease. She reassured me this diagnosis wasn’t an immediate death sentence, yet I remained stunned for nearly a year wrestling with how to cope alone with this disease. My husband and family were with me but with whom could I share my questions, concerns, anxieties and anger?

At first, I fell silent. But deep down, I was angry, miserable and depressed. Yet I wanted to appear tough, not complain, and be brave. I rarely showed any of my feelings but just sat and endured my misery, actually just “being,” not thinking or doing. When my husband asked me what I’d done all day, I couldn’t tell him I just sat. Also, I didn’t want to contact people nor let them contact me. I built armor around myself and absorbed my current situation.

As soon as I was able to stand for several hours, I began painting. When I was flinging paint my mind was engaged without any formed thoughts but in doing. Momentarily, I focused! At the end of each painting session, I felt I’d accomplished something on the canvas. Yet it was a year before I considered reaching out to other survivors.

A graduate friend of mine, in 2009, phoned me and told me to call a friend of hers, Mary, who had ovarian cancer. I did so and we met for coffee. She was then Vice President of Colorado Ovarian Cancer Alliance. I admit to “picking her brain” for any advice she would share wth me. She told me about the organization and an upcoming March to the Capital. I could hardly walk because of neuropathy, but my husband and I circled the capital with several other ovarian cancer survivors and their supporters.

She told me also about a survivor support group, Nicki’s circle that met in midtown Denver, one morning a month. I started attending these group sessions. A wonderful professional, Susan, seated us in a circle, told us to introduce ourselves, and to share with the group “our concerns for that day.” The mid town group was fairly large – maybe between 20-30 women of all ages, backgrounds, and from many states. However, we all shared the same diagnosis of ovarian cancer. All sessions were informative, some were sad, but I always felt a sense of “belonging.”

On that first day remember sitting next to a woman who cried periodically and told me later her father had died. Somehow, maybe because we were both former nurses, were quite interested in research and were diagnosed a few months apart, we quickly grew close. Not a day went by when Kathy and I didn’t talk, email about the research on ovarian cancer.

Two years after diagnosis, my husband and I felt we should downsize so that when I recurred, we would have money available to seek clinical trials all over the country. So we moved south to the suburbs where Kathy lived. In the next year, another Nicki Circle South formed and we both attended that group together. Because my husband and I spent winters in California and summers in Colorado, after each summer meeting Kathy and I would lunch in the cafeteria. When I was in California, we Skyped and kept up to date on how other survivors were doing. She and her husband even visited me us once in California.

Each year, COCA’s major fundraiser is Jodi’s Race (named for a woman who died shortly after the inaugural race). Kathy and I both made jewelry, cards, and donated all the sales to COCA. We sat together at the breakfast and saw each other socially as well.

Unfortunately, despite the fact that she was completely debulked, (I wasn’t) and 5 years younger — I celebrated my 5 years survival anniversary in August 2013 and she had hers two months later. Yet just before I went to California in November, she learned yet another chemo regime had stopped working. I didn’t see her again as she passed in January.

I have always had many female friends. I have 4 graduate school friends from the 70’s and college teaching friends dating back to the 80’s. We all still see each other several times each year.   All these dear friends have been my biggest supporters! But sometimes when I was busy with Kathy they couldn’t understand how I could have become so close to her so quickly. But when you share a diagnosis of an incurable disease, time speeds up. Only someone who is facing such a challenge can really understand why waiting for ca-125 or CT/PET reports are so stressful.

I miss Kathy everyday but I could not have coped those first 5 years without her. I continue to go to Nicki’s Circle when I’m in Denver. I worry that women who are back in treatment will wonder why I still come but try to introduce hope by sharing the exciting new research I keep finding.

In two weeks, I’ll attend my 7th Jodi’s Run. Again I’ll limp my mile! For me, this event is a bittersweet one. As I look over the thousands of people, I will recognize only a few survivors. In my mind, I will see the faces of all those survivors who are no longer in attendance. Their absence will bring me back to the reality of just how incurable this disease really is.

But I deliberately choose to look at all the survivors who are in attendance with twenty-two teal and purple Mardi Gras strings of beads around their necks, one for each year of survival. I’ll proudly accept my 8 strings and be happy to be together as a group to eat, laugh, cry, talk, and walk.

I also chose the summer of 2015 to attend the National Ovarian Cancer Convention in San Diego. Again, looking around me and seeing those 400 brave ovarian cancer survivors gave me goose bumps! Each of us knew how difficult our individual cancer journeys have been and encouraged each other. I belonged there also!

I also choose again this year to serve as a consumer advocate for the Department of Defenses Ovarian Cancer Research Program committee to rank research proposals for funding. The consumer advocates’ role is to look for projects that particularly meet survivors’ needs. In addition, I volunteer for the Clearity Foundation in La Jolla and “Nine Girls Ask for a Cure” (another nonprofit that raises funds for ovarian cancer clinical trials) when I’m in California. I treasure the survivor friends I’ve met in both states. We inspire each other.

Why do I choose to remain so involved in the ovarian cancer community? It is because that community is part of who I am! I’ve been so fortunate to be in remission nearly 8 years. The least I can do for Kathy and so many other survivors is volunteer. In my mind, each time I volunteer, I say, “This is for you, Kathy!” In my mind, I may be alone again, but not really! I continue to nurture new teal survivor friends in this life and yet feel connected to a larger teal community I know that exists for me beyond this one.