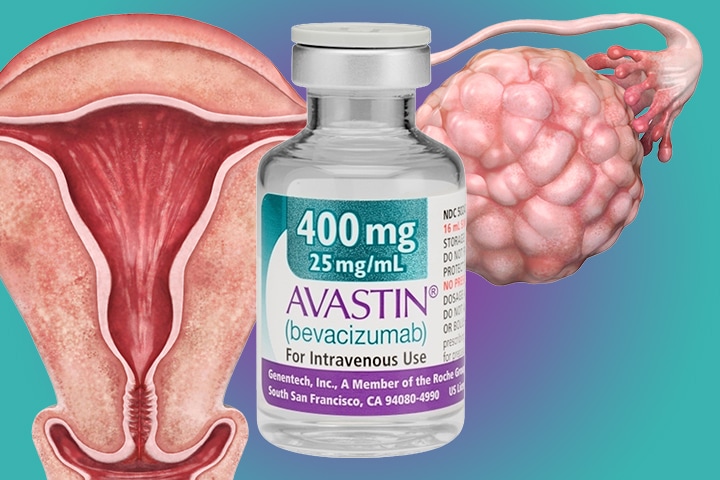 In a cohort of nearly 700 women receiving carboplatin plus bevacizumab (Avastin), median progression-free survival (PFS) was 13.3 months for the group that also received pegylated liposomal doxorubicin, as compared with 11.6 months for those assigned to standard gemcitabine therapy (HR 0.81, 95% CI 0.68-0.96, P=0.012), Jacobus Pfisterer, MD, PhD, of the Gynecologic Oncology Center in Kiel, Germany, and colleagues reported.

“These results suggest that carboplatin-pegylated liposomal doxorubicin-bevacizumab is the new standard regimen for patients with recurrent ovarian cancer suitable for platinum-based and antiangiogenic treatment,” Pfisterer’s group wrote in the Lancet Oncology.

Commenting on the findings in an accompanying editorial, Richard Penson, MD, of Massachusetts General Hospital in Boston, took it one step further, suggesting that the “findings merit a more emphatic conclusion: that carboplatin-pegylated liposomal doxorubicin-bevacizumab should be the new standard of care, and clinicians need good reasons not to use it.”

But Penson added that there is currently a “sea change” in thinking about how to manage ovarian cancer, including the use of poly ADP-ribose polymerase (PARP) inhibitors and antiangiogenic agents in combination.

Of note was the absence of PARP inhibitors in the trial, Pfisterer and coauthors said, as these agents are now approved as maintenance therapy in patients with recurrent ovarian cancer after successful retreatment with platinum. They also acknowledged that not having any information on patients’ BRCA mutational status was another weakness of the study.

Penson stressed that patients should have access to the best treatment option available to them, and that a good reason to avoid bevacizumab would be so as to give only four cycles of chemotherapy for a patient anticipating PARP inhibitor maintenance. Bevacizumab might also be avoided if a patient has an unacceptable risk of gastrointestinal perforation or fistula, even though this toxicity is rare, at only 1.2-1.5% of patients with ovarian cancer.

On the other hand, said Penson, “a good reason to add bevacizumab to a platinum-based regimen is that this combination is associated with a higher objective response rate than is chemotherapy.” For example, the response rate was 21% higher when bevacizumab was added to carboplatin and gemcitabine in the OCEANS trial.

“A higher response rate means more patients are eligible for switch maintenance with a PARP inhibitor,” Penson pointed out. On the other hand, women with BRCA-mutated ovarian cancer have a much better prognosis than those whose tumors do not express BRCA and should be preferentially treated with a PARP inhibitor, as BRCA mutations are a target for these agents.

The multicenter phase III trial from Pfisterer and colleagues was conducted at 159 academic centers in Europe from 2013 to 2015, and organized by the European Network for Gynaecological Oncological Trial groups and Gynecologic Cancer Intergroup. In all, 682 women with recurrent epithelial ovarian, primary peritoneal, or fallopian tube carcinoma were randomized 1:1 to either of the two combinations. An eligibility requirement was disease recurrence occurring more than 6 months since first-line platinum-based chemotherapy.

In the standard arm, patients received bevacizumab (5 mg/kg on day 1), gemcitabine (1,000 mg/m2 on days 1 and 8), and carboplatin (area under the concentration curve [AUC] 4 on day 1), with the regimen repeated every 3 weeks for six cycles. This was followed by single-agent maintenance bevacizumab at the same dose every 3 weeks until disease progression or unacceptable toxicity.

In the investigational arm, women received bevacizumab (10 mg/kg on days 1 and 15), carboplatin (AUC 5 on day 1), and pegylated liposomal doxorubicin (30 mg/m2 on day 1), with this regimen repeated every 4 weeks for a maximum of 6 cycles. This was again followed by maintenance bevacizumab (15 mg/kg) given every 3 weeks until disease progression or unacceptable toxicity.

Almost half of the patients in each treatment group had previously received an antiangiogenic drug, usually bevacizumab.

Adverse events (AEs) of grade 3 or higher were slightly more common in the gemcitabine arm than in the pegylated liposomal doxorubicin arm (81% vs 75%, respectively), while rates of serious AEs were similar (9% vs 10%). Fatal AEs occurred in 2% of the standard group and 1% in the investigational group.

The study was funded by Hoffmann-La Roche.