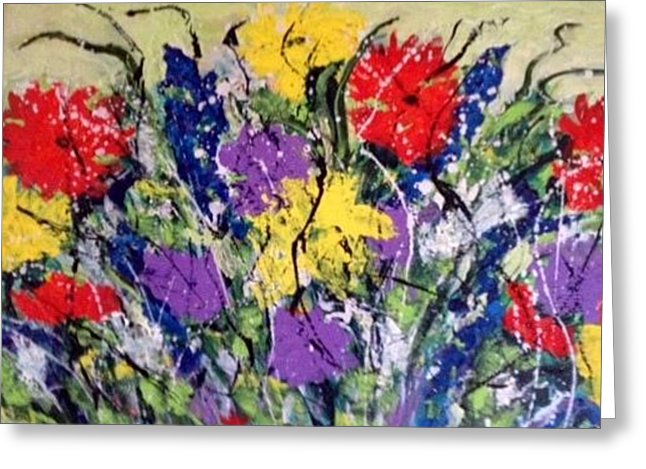 Most of us are aware of how animals can affect our state of mind both physically and psychologically. For years I taught in an inner city urban college made quite accessible to people who were differently abled. I had deaf students, blind students and physically impaired students. I quickly learned how critical rescue dogs were to the academic and physical success of students in the classrooms. Later, when my mother, in her last two months of life, was in a nursing home, a cat took up residency there. Somehow the cat showed up in the rooms of residents who were close to dying, jumped up on their beds, and purred happily keeping their patient’s bodies warm until they took their last breaths.

However, it wasn’t until I was diagnosed in 2008 with stage IIIC ovarian cancer, followed by surgery and 18 months of chemotherapy, that I realized how the presence of an animal could assist in one’s healing process.

I grew up on a farm. We had new puppies every spring but few lived longer than a year because they chased cars and, often, were run over and died. Likewise, the barn cats had several litters of kitties every year but only a very few lived. They were either dinner for coyote or other animals or disposed of in a fashion no one would tell me about. Consequently, I was one of the few kids who never had the companionship through childhood of a pet dog or cat.

After I married and had children, my husband and I bought our oldest son a dog, Suzie, and five years later, we got our youngest son a cat, Sammie. The dog lived in our home until the oldest son went to college and than she died. The cat was 7 when our youngest went to college, and after that she became my pet. We often called her “Paste” because as she got older, she was always cold and would seek warmth on my lap or on any other part of my body she could snuggle up to. She had kidney disease, but my husband and I gave her liquids under the skin until she was 23 years old. When the vet came to the house to put her down, we all cried.

About 5 years later, I was diagnosed with cancer. The next 18 months were horrible. Because of the side effects of the chemo, I was lost in a world of dark depression, confusion and mind numbing fatigue. I’d sit in a chair or lie on a sofa, not able to watch TV, read, listen to music or visit. I was only able to BE alone. At the end of that time, I began thinking about what would have made it easier to cope. A longing for the long forgotten “Paste” warmly curled in my lap surfaced. 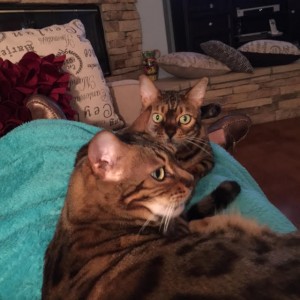 However, I had a newly adopted grandson who was supposed to be allergic to cats. So I researched the least allergenic cats. I was told one good breed was the Bengal, a cross between an Asian Leopard cat and an English Tabby. They are a very active breed that loves to run, jump, climb and play. As my husband and I were approaching 70, the breeder suggested we get two so they could play together and not demand our attention. We had to put down deposits on each. I wanted sisters. But the first litter included one female and 5 male. However the same male had another litter expected 2 weeks later. Again that litter was 5 males and 1 female. The younger was taken from her Mom at 2 months and put with her half sister and her Mom until I got them at 4 ½ months.

I knew if I were to survive ovarian cancer (80 percent of cases it comes back in 2 years), I needed lots of love and lots of hope. So the oldest we named Liebe after my German grandmother, Matie Frederika Liebe Carolina Block Eilers, Liebe meaning love in German. The other was named Hoffnung meaning Hope in German. We call her Hoffie. The two of them continue to give me love and hope each day.

From day 1, they displayed totally different personalities and distinct ll voices. They looked alike but we quickly learned that Liebe had a kink in her tail and the other has a very pretty tail that she carries exceptionally high, and grooms it like a popcycle. Liebe talks to anyone constantly and expects you to talk back to her from the time she wakes up until she goes to sleep. Hoffie, on the other hand, is a master manipulator. She knows when it is 5:00 pm as ice cubes clink in the glasses for happy hour. She knows that then she and her sister get their own kitty treats   because we get our treats! So often she precedes us all to the kitchen.

They love visitors, and unlike many cats, even when they were 5 months old, when the doorbell rings, they accompany you to the door, smell the visitors, and when all are seated, lap to sit on. Hoffie often lags behind her sister somewhat. Few people have been allergic to them and they even sleep with our grandson whoever he visits us.

They haven’t been separated from each other since Hoffie joined Liebe. When we are home, they are rarely further than 6 feet from where we are. To this day, I have a kitty cancer treatment daily. I lie down, pat my lower tummy and say, “come give me a kitty treatment.” One or the other curls up on my tummy and goes to sleep. I always visualize the warmth and comfort of their breathing as a wind entering my body and sweeping out any cancer cells that could be remained.

My husband and I joke that they have healed us both. But to me it isn’t really a joke! We both sleep deeper and longer than we did before we got them. We laugh at their antics nearly daily. We have downsized several times but tell people each time we bought the girls a different house. They can’t go outside but love a deck, 10 feet off the ground without a staircase. They love to watch the birds and occasional walkers. So that was the first criteria for a downsized house.

I’m a big believer in the Placebo Effect! If you believe something works, it does. Therefore, the girls and I are celebrating 8 years of their effect on my health! So I’d encourage any patient to consider visiting a shelter or breeder and giving an animal a home. I can guarantee they will give you more than you give them!

To read all of Annette’s blog posts on The Clearity Portal, click here.