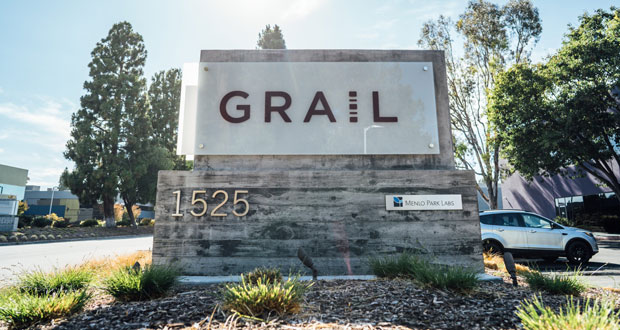 Rosemary Jemo volunteered for a blood test trial based on pioneering research from Johns Hopkins University because she thought it would be great if it could save lives.

The 71-year-old Pennsylvania hairdresser now believes that decision saved her own life after the blood test detected abnormal values that led researchers to conclude she might have cancer.

A PET scan revealed concern about her ovaries. Surgery uncovered a football-sized ovarian cancer tumor — a lethal type of cancer that is not usually detected until its late stage.

“I don’t think my regular gynecologist would have caught it,” Jemo said. She had been working part-time and teaching exercising classes and did not have any notable symptoms — just a slight twinge occasionally on her left side. Her two sons are grateful that it turned out the way it did — her mother died of cancer that was suspected to have either started in her stomach or ovaries.

“My family was more in shock than I was,” said Jemo, who has plans to continue to be monitored every three months to make sure the cancer had not returned.

Jemo was one of more than 10,000 women who participated in the DETECT-A study through Johns Hopkins and Geisinger Health that is paving the way for the development of a new test, CancerSEEK, aimed at changing the paradigm for when cancers are detected.

In that study, the test more than doubled the number of cancers that were first “screen-detected” among participants, with 25% women diagnosed with cancer through current standard of care tests, but that number rose to 52% when the blood test was included in screening.

New tests could be game-changers

CancerSEEK is one of several forerunners for a multi-cancer blood screening test that would complement existing single cancer screenings like mammography, pap smears and colonoscopies.

“The existing screening tests are really important. We know they save lives,” said Megan Hall, senior director of medical communications for GRAIL, a company that released a new multi-cancer blood test named Galleri onto the market in June. “Everybody should be getting their regularly scheduled recommended screening test. The problem is there are only five of them and they test for a single cancer at a time.”

Cancers such as pancreatic, esophageal and ovarian currently have no recommended screening tests, Hall said.

In addition to those cancers, the Galleri test can detect rarer cancers, with more than 50 types of cancer detected in a clinical study and a low false positive rate of less than 1%.

Galleri uses DNA sequencing and machine-learning algorithms to look for DNA in the blood that may have come from cancer cells. Then, it can also use cancer-specific patterns detected in the DNA to help point to where in the body the cancer is located. Clinicians can use that information to determine the best follow up for diagnosis and care.

“We estimate that by adding Galleri to the existing five recommended screening tests that we could potentially reduce mortality by about 40% of the cancers that we detect that those patients would otherwise — would be dead within five years,” Hall said.

In Maryland, 35,000 new cancer cases are expected this year alone and more than 11,000 cancer deaths, officials with the American Cancer Society estimate.

Both Galleri and CancerSEEK have breakthrough medical device designation from the FDA, but both are planning to seek FDA approval as they conduct even larger-scale studies. FDA approval could pave the way for insurance reimbursement.

Galleri is working with a broad array of institutions with more than 140 clinical study sites, including the Mayo Clinic, Dana-Farber Cancer Institute, Cleveland Clinic, Sutter Health, OHSU, Intermountain Healthcare and U.S. Oncology Research and the National Health Service in the U.K. Its Pathfinder study enrolled 6,629 participants and detected 29 cancers including early-stage pancreatic cancer, an aggressive lung cancer and small intestine cancer. Interim results were presented this year. GRAIL expects to conclude the follow-up period in 2022.

As of June 4, Galleri is available in the U.S. by prescription only for those with elevated cancer risk, such as people ages 50 and up. Galleri has a robust education, resource and tools program for clinicians who want to use it, Hall said. Particularly, the ability to pinpoint the likely source of the cancer is helpful, she said.

GRAIL sees an opportunity for physicians in cases like ovarian cancer to intervene earlier when outcomes are better. Galleri accurately detects early stage (stage I-II) ovarian cancer 80% of the time, she said.

One challenge for the tests being developed has been moving from research labs to commercialization.

CancerSEEK has been able to transition from the Johns Hopkins lab to an Exact Sciences company through the support of key institutional programs at Hopkins and the NIH, describes Dr. Isaac Kinde, co-founder of Thrive Earlier Detection. Thrive was acquired by Exact Sciences, a larger molecular diagnostics company, in January.

“The Hopkins Technologies Ventures group has been remarkably helpful in giving that early boost to help support this divide between the lab and the commercial product that’s sometimes is called the ‘valley of death,’ ” Kinde said. “Because it’s quite risky from an investor standpoint to put money into these projects really really early on, but that’s the nature of science.”

That group helped build a clinical-grade lab for the study that successfully detected 26 cancers before standard-of-care screenings or symptoms, including Jemo’s ovarian cancer. The test was built from decades of work by world-renowned cancer geneticists, he said. The promise of multi-cancer blood testing is dependent on developing tests that can detect cancer often enough without too many false positives — key to getting widespread adoption of new screening.

Players in the multi-cancer blood test realm are betting those numbers will bear out enough to create a shift in the timeline for diagnoses, although they use different technology to get there.

This article was published by Maryland Daily Record.