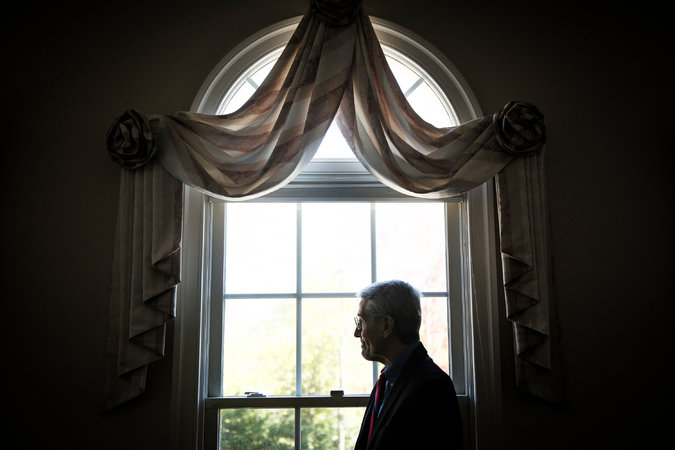 Mary Pazdur had exhausted the usual drugs for ovarian cancer, and with her tumors growing and her condition deteriorating, her last hope seemed to be an experimental compound that had yet to be approved by federal regulators.

So she appealed to the Food and Drug Administration, whose oncology chief for the last 16 years, Dr. Richard Pazdur, has been a man denounced by many cancer patient advocates as a slow, obstructionist bureaucrat.

He was also Mary’s husband.

In her struggle with cancer and ultimately her death in November, Ms. Pazdur had a part, her husband and a number of cancer specialists now say, in a profound change at the F.D.A.: a speeding up of the drug approval process. Ms. Pazdur’s three-year battle with cancer was a factor, they say, in Dr. Pazdur’s willingness to swiftly approve risky new treatments and passion to fight the disease that patient advocates thought he lacked.

Elizabeth Holmes, the founder and chief executive of Theranos, has become a Silicon Valley celebrity. But recently questions have been raised about how well the company’s testing technology works.
A Genomic Health laboratory in Redwood City, Calif., in 2006. The company, which makes one of the diagnostic tests cited by the Food and Drug Administration, disputed the criticism.
Dr. Richard Pazdur, director of the Food and Drug Administration’s cancer drug office, has become a lightning rod for critics who say his demands on approving experimental drugs have cost lives and set back researchers. Others worry that the emotions of a loving husband have short-circuited vital safeguards.

Dr. Pazdur with his wife, Mary, and their dog Cleo in their garden. Ms. Pazdur, an oncology nurse, appealed to the F.D.A. to take an experimental compound to treat her ovarian cancer.
“Rick Pazdur is the most important person in the cancer world,” said Ellen Sigal, the founder and chairwoman of Friends of Cancer Research, an advocacy group. Now that he has watched his wife die of the disease, she said, “you can’t go through something like this and not be changed by it.”

Certainly there has been a change at the powerful agency. Since Ms. Pazdur learned she had ovarian cancer in 2012, approvals for drugs have been faster than at any time in the F.D.A.’s modern history. Although companies go through a yearslong discovery and testing process with new drugs before filing a formal application with the F.D.A., the average decision time on drugs by Dr. Pazdur’s oncology group has come down to five months from six months. That is a major acceleration in a pharmaceutical industry where every month’s delay can mean thousands of lives lost and sometimes hundreds of millions of dollars in sales that, given limited patent times, can never be recovered.

When asked specifically how his wife’s illness had changed his work at the F.D.A., Dr. Pazdur said he was intent on making decisions more quickly.

“I have a much greater sense of urgency these days,” Dr. Pazdur, 63, said in an interview. “I have been on a jihad to streamline the review process and get things out the door faster. I have evolved from regulator to regulator-advocate.”

Many factors are driving him, he continued. “Was Mary’s illness one of them? Yes,” he said. But in 2012, he added, Congress also passed a law that gave the F.D.A. more money and a new pathway to work more closely with drug makers when a medicine may save lives. Another important change in the same period, he said, was a surge in advances in genetic research that made some medications more effective and easier to test.

A year ago, when a clinical trial showed that a skin cancer medicine called Opdivo could also extend survival in lung cancer patients, Dr. Pazdur got the results directly from the trial’s overseers weeks before executives at the Bristol-Myers Squibb Company, the maker of Opdivo, saw the numbers. That allowed him to approve the drug for lung cancer patients three months ahead of schedule.

In 2014, Dr. Pazdur approved a drug for widespread use against ovarian cancer that an expert advisory panel had previously voted, 11 to 2, against authorizing. Ms. Pazdur did not take the drug, Dr. Pazdur said, because it was targeted at a form of cancer that was genetically different from hers.
But Ms. Pazdur, who was a longtime oncology nurse at the National Institutes of Health, did take the experimental compound that the F.D.A. authorized for her. Dr. Pazdur said he was not involved personally in that decision, in 2013, because the medicine his wife took was a cancer vaccine, one of the few kinds of cancer therapies Dr. Pazdur does not have authority over.

That decision was made in a separate category of “compassionate use” drug approvals for individual patients. Every year, the F.D.A. receives about 1,000 similar applications from terminally ill people seeking experimental medications, and agency officials say they approve 99 percent of them. The approvals are distinct from those for drugs that have gone through clinical trials and that are for broad distribution.

Despite the sympathy for Dr. Pazdur so soon after the loss of his wife, others say they are uneasy about the F.D.A.’s increasing embrace of what they consider to be soft science and rapid approvals.

“I respect Rick Pazdur enormously,” said Fran Visco, the president of the National Breast Cancer Coalition. “But I am worried that the F.D.A. is losing sight of the incredible importance of making sure drugs save lives.”

Still others see a windfall for drug makers that are getting their products to market faster.

“The F.D.A. is more beholden to industry now than at any time since I became a close observer of the agency in 1971,” said Dr. Sidney Wolfe, who with Ralph Nader founded Public Citizen’s Health Research Group. “Too many decisions F.D.A. now makes are driven by industry concerns, and as a result people are getting hurt.”

Cancer medicines not only often fail to save patients but can accelerate their deaths and make their last weeks far more painful, and critics, like Public Citizen, argue that the F.D.A. focuses far too much on saving the few at the cost of cutting short the lives of many.

Robert Hazlett, a research analyst with Ladenburg Thalmann, an investment firm, said the F.D.A.’s greater urgency — particularly in cancer drug approvals — had led to a boom in biotechnology shares.

The sad thing is that many of the recently approved cancer drugs provide at most a few additional months of life and are not a cure.

“The improvements at F.D.A. are a big part of biotech’s huge success in recent years,” Mr. Hazlett said.

Dr. Pazdur eats as sparingly as Gandhi and rises every morning at 4 to attend a spin class, which keeps him greyhound-thin and perhaps helps him ride above the vitriol that has been routinely spewed at him.

Before his wife’s death, Dr. Pazdur saw his name plastered on ads on Washington city buses and was shouted at by protesters. He was threatened so often that the F.D.A. posted security guards at some public meetings he attended. Over the years, The Wall Street Journal found fault with him, including in a 2002 editorial titled “F.D.A. to Patients: Drop Dead.”

“So what’s the F.D.A.’s problem?” the editorial asked. “Quite simply, Richard Pazdur.”

The Pazdurs, who met in June 1979 on the first day of his oncology fellowship at Rush-Presbyterian-St. Luke’s Medical Center in Chicago, where Ms. Pazdur was then a nurse, knew from the start of her disease how hard it would be. One of their first patients together was a woman who died of ovarian cancer. Today only about 45 percent of ovarian cancer patients are still alive five years after a diagnosis.

“I recall thinking back then, ‘I wonder how I would react to this situation?’ ” Ms. Pazdur said in an interview in October, the month before she died. “So when it happened to me, I sort of knew how I would deal with it.”

As it turned out, Ms. Pazdur suffered terribly from taking a second experimental drug in a clinical trial, in which Dr. Pazdur had no role, at the National Institutes of Health. Her heart swelled to near bursting, her blood pressure soared, and she became so tired that she could barely walk to the bathroom. That experience was one of many reasons that Dr. Pazdur has also pushed for better research into drug side effects, an effort the F.D.A. began in earnest last year.

“Instead of having physicians assess drug toxicities, which they do a terrible job of, we’re going to start asking patients to assess them,” Dr. Pazdur said. “It’s a huge issue.”

“I’m a nurse. I’ve seen this movie before,” she said at the time. “I’m going to die from this. And I want to live my last days as best as I can.”

On the morning of Nov. 24, Mary Pazdur died holding her husband’s hand. She was 63.

To read this entire article on The New York Times, click here.