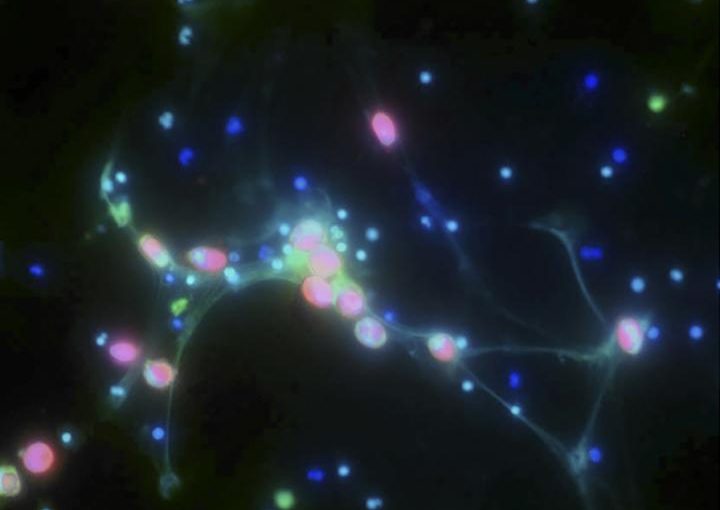 Researchers from the University of Texas MD Anderson Cancer Center have discovered that ovarian cancer cells spread, or metastasize, to new tissue after being caught in DNA “webs” extruded by immune cells. The study, which will be published in the Journal of Experimental Medicine, reveals that preventing immune cells from forming these webs reduces metastasis in mice, suggesting that similar treatments could be used to limit the spread of ovarian cancer in humans.

Ovarian cancer is the fifth leading cause of cancer death in women. Advanced stages of the disease are typically characterized by the spread of cancer cells to the omentum, a fatty tissue that drapes from the stomach and is informally described as the “policeman of the abdomen” due to its role in housing immune cells that can fight off infections in the abdominal cavity. How and why ovarian cancer cells preferentially spread to this tissue is unclear.

A team of researchers led by Dr. Honami Naora at the University of Texas MD Anderson Cancer Center found that, at early stages of ovarian cancer, immune cells called neutrophils accumulate in the omentum and begin to unwind and extrude their DNA in the form of sticky webs. These webs, known as neutrophil extracellular traps (NETs), are normally used to entrap invading microbes. But Naora and colleagues found that NETs can also entrap circulating ovarian cancer cells, allowing them to colonize the omentum.

Currently, the omentum is often surgically removed from patients with early-stage ovarian cancer in an attempt to limit the spread of the disease. But Naora and colleagues suggest that inhibiting NET formation could prevent ovarian cancer metastasis while maintaining the omentum’s protective function within the abdomen. “Our study demonstrates that inhibiting NET formation decreases omental metastasis,” Naora says. “Further studies of this intriguing host defense mechanism could yield new insights into improving ovarian cancer treatment.”

This article was published by EurekAlert!