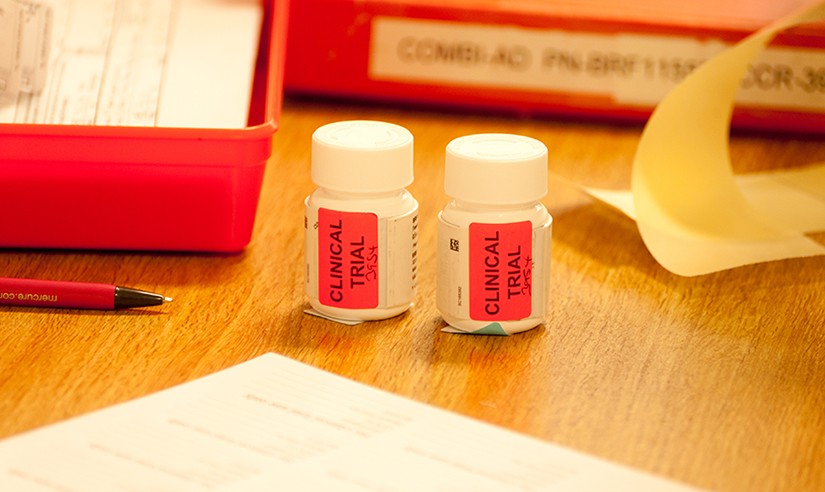 A new targeted treatment for ovarian cancer has shown ‘very promising’ results in an early clinical trial – shrinking tumours in half of women with the disease.

Researchers believe the drug, which mimics the action of folic acid to enter cells, could hold huge promise for women with advanced ovarian cancer who have stopped responding to standard treatment.

A team at The Institute of Cancer Research, London, and The Royal Marsden NHS Foundation Trust tested the drug, known in the study as ONX-0801, in 15 women with ovarian cancer as part of a wider phase I clinical trial.

Phase I trials are run in patients who have advanced cancer as a way of testing a drug’s safety, and it is highly unusual to see major clinical responses at this stage.

But in the new study, which is still ongoing, ONX-0801 significantly shrunk tumours in seven of the 15 ovarian cancer patients – results the researchers described as ‘exciting’ and ‘very promising’.

And in patients whose tumours had the particular molecular target for the drug, the results were even better – with seven of 10 women responding.

The results are presented on Saturday 3 June 2017 at the American Society of Clinical Oncology (ASCO) Annual Meeting 2017 in Chicago.

ONX-0801 is the first in a brand new class of drugs, discovered at the ICR, which attacks ovarian cancer by mimicking folic acid to enter cancer cells. The drug kills cells by blocking a molecule called thymidylate synthase and causing irreparable DNA damage.

Because ovarian cancer cells have an abnormally large number of receptors for folic acid, called alpha folate receptors, they are particularly targeted by the treatment, while healthy cells are left alone.

And the trial found that because the drug targets cancer cells specifically, it did not have side-effects often seen with traditional chemotherapy such as infections, diarrhoea, nerve damage and hair loss.

The researchers have also identified tests that detect tumours with high levels of the alpha folate receptor, so that doctors can pick out the women most likely to benefit from the treatment.

The ICR and Royal Marsden team, alongside partners at specialist healthcare company BTG, is looking for partners to fund next-stage clinical trials as soon as possible – to see whether the drug can have the hoped-for benefits for survival for patients with ovarian cancer and other cancers.

The trial was conducted in collaboration with Onyx Pharmaceuticals, Inc., now a subsidiary of Amgen Inc., and received funding from BTG.

The drug, which will be known as BTG945 going forward, will also be highlighted at ASCO by the UK’s Department for International Trade, as one of the UK’s best biopharma assets available for licensing or partnering.

Study leader Dr Udai Banerji, Deputy Director of the Drug Development Unit at the ICR and The Royal Marsden, said: “The results we have seen in this trial are very promising. It is rare to see such clear evidence of reproducible responses in these early stages of drug development.

“The beauty of this particular drug is that it is targeted to the cancer cell. This means there are fewer side-effects, making it a kinder treatment for ovarian cancer patients.

“It’s early days of course, but I’m keen to see this treatment assessed in later-stage clinical trials as soon as possible. We have also developed tests to pick out the women who are likely to respond to the drug, making the treatment potentially more cost-effective, and ensuring other patients can receive alternative treatment.”

“ONX-0801 is the latest in a long line of precision cancer medicines to have been discovered here at the ICR – 20 since 2005 alone. The drug works in a particularly clever way by mimicking the effects of folic acid to hit cancer cells selectively while leaving healthy tissue alone.

“It looks a highly promising treatment with the potential to have huge benefits for women with ovarian cancer, and I’m very keen to see it progress to later-stage trials.”

Professor David Cunningham, Director of Clinical Research at The Royal Marsden, said: “At The Royal Marsden we pride ourselves on developing new cancer drug treatments. Clinical drug trials such as ONX-0801 offer our patients more treatment options for advanced disease. We are delighted this trial has had a positive result for patients.”

Marianne Heath, 68, a patient who received the drug in this trial at The Royal Marsden, said: “It was not a big decision for me to go on a Phase I trial, I had no other treatment choices so felt this was my only option. I had quite a bit of chemotherapy, and now some radiotherapy. There’s nothing left but trials now.

“I do like being on a trial as I feel part of something and just want to feel I am doing something to get better. I feel very well looked after and the Drug Development team at The Royal Marsden are wonderful.

“It gives me and my family a buzz when we are told my scans look better. I just want to keep going so I can keep the tumours at a level where I can enjoy my life.”