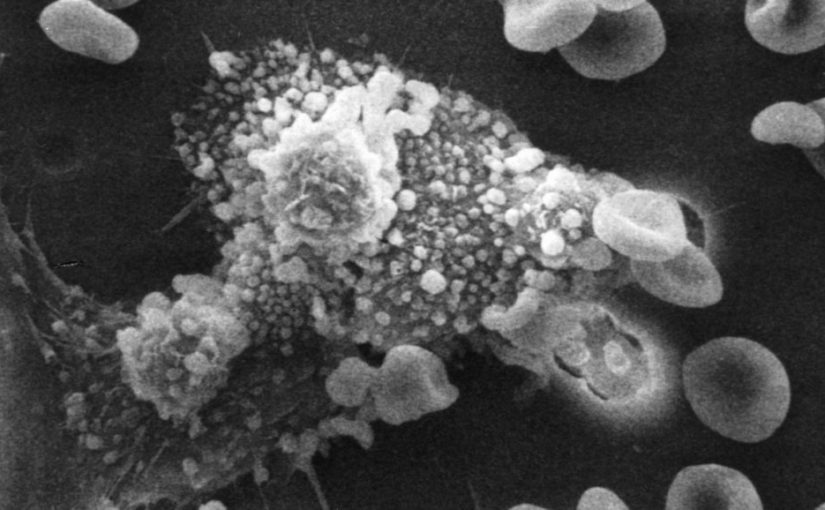 Over the years, I’ve written quite a bit about a protein called CD47 that is found on the surface of many types of cancer cells, as well as on aging red blood cells.

In 2009, researchers in the laboratory Stanford stem cell biologist Irving Weissman, MD, showed that CD47 on human leukemia stem cells acts as a “don’t eat me” signal to the immune cells called macrophages that patrol the body to eliminate infected and diseased cells. Blocking this signal with a CD47-binding antibody called H5F9-G4, or 5F9, restores the ability of macrophages to recognize and kill cancer cells in the laboratory and in mouse models of human disease.

Since then, several clinical trials have launched to test the effect of 5F9 in humans with a variety of cancers. The results of a phase-1 (testing the safety of the drug) clinical trial of 5F9 in combination with another immunotherapy called rituximab in patients with non-Hodgkin’s lymphoma were published last fall in the New England Journal of Medicine. And now, researchers led by Stanford oncologist Branimir Sikic, MD, and Weissman, as well as several Stanford colleagues and researchers at Forty Seven, Inc, reported the results of a phase-1 clinical trial of 5F9 in people with advanced solid cancers in the Journal of Clinical Oncology.

The trial indicated that 5F9 appears safe and relatively well tolerated in most patients. The most significant side effects in the 62 patients enrolled were transient anemia (which is to be expected as aging red blood cells also express CD47 on their surfaces), fatigue and headache.

As Sikic explained to me:

“We found as expected from animal studies of the antibody that the main side effect was anemia, which was dependent on the dose and especially on how we gave the antibody. We started with a low dose on the first day, and then increased the dose in subsequent weeks. When given appropriately, the antibody is generally very well tolerated.”

Although the trial was primarily designed to test the safety and optimal dosing of the antibody, rather than efficacy, the researchers were encouraged when it did show some preliminary signs of anticancer activity in three patients, each of whom had been heavily pre-treated with other therapies prior to enrolling in the trial.

As Sikic explained to me:

“It is always encouraging if a new treatment in a phase I trial produces some evidence of anticancer effects. In our trial, two patients had partial remissions of their cancers: one of which was an ovarian cancer and the other was a cancer of the fallopian tubes. A third patient with lymphoma also had a mixed response — some tumors went away whereas another remained the same size. These results are encouraging and prompted the company to proceed to phase 2 trials in ovarian cancers and lymphomas.”