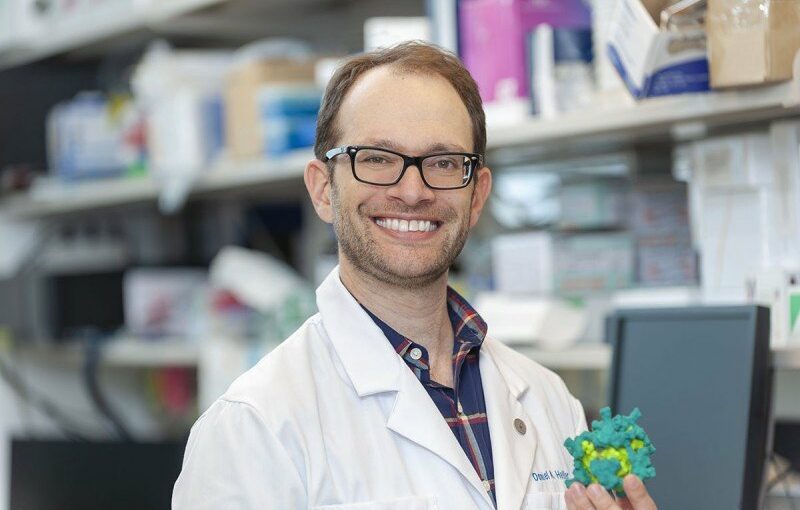 Researchers at Memorial Sloan Kettering Cancer Center (MSK) have developed a sensor that can be trained to sniff for cancer, with the help of artificial intelligence.

Although the training doesn’t work the same way one trains a police dog to sniff for explosives or drugs, the sensor has some similarity to how the nose works. The nose can detect more than a trillion different scents, even though it has just a few hundred types of olfactory receptors. The pattern of which odor molecules bind to which receptors creates a kind of molecular signature that the brain uses to recognize a scent.

Like the nose, the cancer detection technology uses an array of multiple sensors to detect a molecular signature of the disease. Instead of the signals going to the brain, they are interpreted by machine learning — a type of computer artificial intelligence.

MSK researchers led by Kravis WiSE Postdoctoral Fellow Mijin Kim and biomedical engineer Daniel Heller, head of the Cancer Nanomedicine Laboratory at MSK, built the technology using an array of sensors composed of carbon nanotubes. Carbon nanotubes are tiny tubes, nearly 100,000 times smaller than the width of a human hair. They are fluorescent, and the light they give off is very sensitive to minute interactions with molecules in their environment.

Each nanotube sensor can detect many different molecules in a blood sample. By combining the many responses of the sensors, the technology creates a unique fluorescent pattern. The pattern can then be recognized by a machine-learning algorithm that has been trained to identify the difference between a cancer fingerprint and a normal one.

In experiments conducted on blood samples obtained from patients with ovarian cancer, the researchers found that their nanosensor detected ovarian cancer more accurately than currently available biomarker tests. (A biomarker is a particular chemical produced by tumors and spread through the blood circulation that indicates the presence of disease. In this case, the biomarker tests were ones for the ovarian cancer-related proteins CA125, HE4, and YKL40.)

The hope for patients is that researchers will develop the technology further so that it can eventually be used in the clinic to rapidly screen for early-stage ovarian cancer and many other cancers.

Several serum biomarker tests for ovarian cancer are already in use. Unfortunately, these standalone biomarker measurements have proven to be ineffective at early detection. Currently, no screening strategy can identify ovarian cancer at an early enough stage to reduce mortality.

The nanosensor approach could potentially provide a better way.

“Ovarian cancer spreads along the surfaces of the abdomen and pelvis [as opposed to through the blood], which makes finding it with a blood test especially challenging,” says MSK surgeon Kara Long Roche, who was an author on the study. “This technology could potentially find more subtle, complex changes in the blood, which may be the key to early detection — and early detection will save lives.”

To train the machine-learning algorithm, the researchers needed to collect sensor responses from many blood samples, as this method requires many examples to be accurate. In addition, samples from patients with other conditions besides ovarian cancer were used: “Certain other diseases can trick the sensor because they produce some of the same components in the blood,” says Dr. Kim, the lead author of the study.

Although the technology improves the accuracy of ovarian cancer detection over current biomarker-based methods, more work is needed to enable the detection of early-stage ovarian cancer and confirm that this test works in people.

“We won’t stop until there is a way to prevent ovarian cancer deaths,” says Dr. Heller.

Toward a Universal Cancer Sensor

The researchers say the technology can be adapted to detect many types of cancers using the same set of sensors, without the need to first identify a biomarker.

“A major limitation in the development of cancer screening tests has been the lack of sufficient biomarkers,” says Lakshmi Ramanathan, Chief of the Clinical Chemistry Service at MSK and an author of the study. “The ability to develop a screening test without the need for a biomarker is an exciting possibility for this type of technology.”

In addition, the same set of sensors could be used to train algorithms to detect different types of cancers. “We think that this technology can be developed to simultaneously detect many diseases, although additional measurements must be conducted using samples from patients with these conditions,” Dr. Heller says.

The technology comes as the Biden Administration reignites the Cancer Moonshot effort, now focusing it on cancer screening. Using a “universal” cancer sensor approach, the technology has the potential “to help make screenings more accessible and available to all,” as the report states.

Early detection, facilitated by cancer screening efforts, is a crucial strategy to prevent cancer deaths. As a recent briefing from the White House states, “With regular recommended screenings, we can often catch cancer when there may be more effective treatment options or even prevent it from developing by removing precancerous tissue.”

The paper was published in the journal Nature Biomedical Engineering. In addition to those from MSK, the paper features authors from Weill Cornell Medicine, Montefiore Medical Center, the University of Maryland, Lehigh University, Hunter College High School, and the National Institute of Standards and Technology.

This article was published by Sloan Kettering Institute.