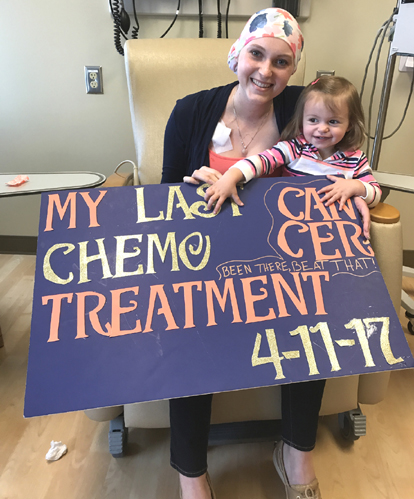 Anne Hermiller and Sarah Ludinich experienced ovarian cancer at different stages in life. What’s similar is their passion for making other women more aware of the disease and its effects.

Hermiller, of Findlay, learned she had cancer in 2014. “I was tired,” she said. “I was just getting tired.”

She went to a bed one night and just felt “a little bump,” which she thought was likely a hernia.

That bump turned out to be “a big mass,” and she sought treatment at the James Cancer Hospital in Columbus, where a surgery removed three tumors. There was one on each ovary — the size of a grapefruit and the size of a canteloupe — with a third in her abdomen, the size of a peach. It was stage 3-C, meaning the cancer had jumped from one part of the body to another.

“We do not have very good screening techniques for ovarian cancer,” he said.

Symptoms may include abdominal bloating, pain, a change in bowel habits and fatigue. Gini Steinke, executive director of the Toledo-based nonprofit organization Ovarian Cancer Connection, said warning signs can also include difficulty eating, urgency or frequency of urination or back pain. These are usually caused by something else, but if it’s unusual for you and lasts more than two weeks, “get it checked out.”

“Women really need to be aware of their bodies,” she said.

She said ovarian cancer is “on the rise” in northwestern Ohio and southeastern Michigan, particularly among younger women and even teenage girls. She plans to have survivors educate medical and nursing students, so they are aware that what may seem to be a urinary tract infection or the flu might be something else.

Women who had their first child over age 35, have a history of another malignancy such as breast or colon cancer, or have the BRCA gene mutation are particularly at risk. Older women, women with polycystic ovary syndrome or endometriosis, and smokers may also be more at risk.

Ludinich knew “something wasn’t right.” She’d had bowel problems, felt bloated all the time and could only eat a few bites at a sitting — because, she later learned, the tumor was taking up so much space. But, she said, every woman experiences symptoms like bloating at some point.

It wasn’t until she actually felt a mass that she got it checked out. An oncologist at the James removed a basketball-sized tumor on Dec. 12, shortly after she turned 21. She had 28 treatments of chemotherapy beginning in January and was deemed cancer-free in April.

Hermiller put it this way: Think of how long it takes for a baby to show, when a woman is pregnant. “There’s so much room in there.” So, as a tumor grows, it isn’t always noticed.

Hermiller said many women don’t realize that “a Pap does not detect ovarian cancer.” (It actually screens for cervical cancer.)

And, “reproductive health is such a taboo subject,” Ludinich said. “We talk about breasts all the time now,” but we don’t talk about ovaries or uteruses, even though every woman has them, she said.

‘You Just Hold Your Breath’

Ludinich has a family history of other types of cancer, but not this kind. She called it “dumb luck.” One of her eggs started growing as if it was a fertilized egg about to become a baby. It’s known as germ cell cancer, different from epithelial cell, which is another type of ovarian cancer.

Being diagnosed “was, I mean, life-shattering,” she said. The day before, Ludinich was worrying about her classes at the University of Findlay, where she is majoring in physical therapy. Now she was making major medical decisions at 21. She said everyone knows someone who has had cancer, but for most of her friends in college it was a parent or a grandparent — not someone their own age.

Hermiller, now 56, was 53 when she was first diagnosed. She has no family history and was a “Y-rat,” meaning she worked out all the time, six times a week, at the YMCA. She also participated in 5Ks. She was a nonsmoker, watched her diet closely and had her children when she was young.

“It does not discriminate,” she said of ovarian cancer.

She had chemotherapy after surgery, also at the James. “I lost my long blond hair,” she said.
Hermiller said doctors had removed all the cancer, and things were looking good. Then she had a recurrence last summer. They ended up having to take out 18 inches of her lower intestine, and got “all but one little spot.” She had complications after the surgery, which might have been caused by something like a staple leaking after they readjusted how her organs lay in her body.

This necessitated a second, emergency surgery.

A year later, she is “struggling.” She lost a lot of weight, and can’t seem to put it back on. “And I’m tired all the time.” She’s also “obsessed with knowing my CA-125,” an antigen measured in a blood test.

Hermiller said she is “hopeful” that she will keep responding well to treatment. She has regular checkups every two months and said “you just hold your breath” when they come in the room.

She’s disappointed there isn’t much awareness of ovarian cancer, but she wasn’t very aware herself, before. She said we all take for granted “that it happens to somebody else.”

To read this entire article by The Courier in The Clearity Portal, please click here.