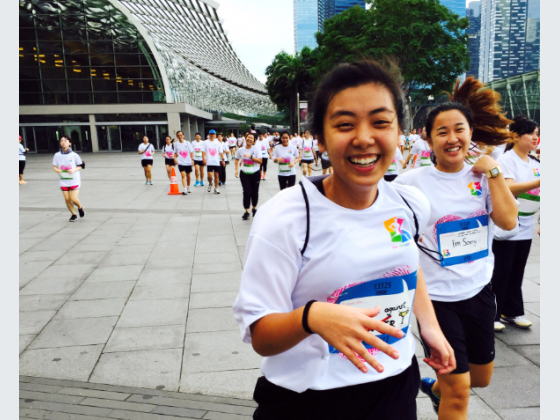 At 20 years old, Cristalle Wang has endured what most grown women might never experience in their lifetime. Diagnosed with Stage 2 ovarian cancer when she was just 15, Ms Wang was given five months to live.

“When the doctor said I had cancer, it felt so unreal. It didn’t occur to anyone that I would get this disease,” said Ms Wang, who has no known family history of the cancer.

Four years on, and in remission, Ms Wang is one of 17 ambassadors for this year’s Run For Hope, which will be held on Jan 31. The annual run is organised by Four Seasons Hotel Singapore, Regent Singapore and the National Cancer Centre Singapore (NCCS) to raise awareness and support for cancer research.

Ms Wang will participate in the 10km run and hopes to raise awareness of the disease by sharing her story.

Ovarian cancer is the fifth most common cancer to afflict women in Singapore, affecting more than 1,700 women between 2010 and 2014, according to figures from the National Registry of Diseases Office.

The disease is most commonly diagnosed in women between the ages of 45 and 65, said Dr Joseph Ng, senior consultant at the Division of Gynaecologic Oncology at National University Hospital (NUH) Women’s Centre and National University Cancer Institute Singapore. But it can also affect girls who have not reached adulthood.

Less than 10 per cent of patients under the age of 21 are diagnosed with ovarian cancer, said Dr John Chia, senior consultant at NCCS’ Division of Medical Oncology.

“Younger girls tend to develop very different subtypes of ovarian cancer compared with adult women,” said Dr Chia. “The exact cause is unknown and is likely to be due to random mutation in the cells in their ovaries.”

Other risk factors for the disease include a strong family history of breast and ovarian cancer. In women in their 30s and 40s, having endometriosis also increases the risk of certain ovarian cancer types, added Dr Chia. Endometriosis is a disorder in which the tissue that normally lines the uterus grows outside of it.

Despite the availability of more effective treatments in recent years, the chances of survival dip drastically when the cancer spreads outside the pelvis.

“Globally, we are still losing the battle against ovarian cancer because about eight out of 10 ovarian cancer cases are diagnosed in the advanced stages. In Stage 3 or 4 disease, the likelihood that the patient will survive more than five years from the time of diagnosis falls to 20 per cent,” said NUH’s Dr Ng.

Like many cancers, the disease often goes undetected until symptoms become obvious, typically in the later stages. For Ms Wang, it started with persistent stomach pains and bloating, which were initially thought to be due to indigestion or a stomach bug.

“What made my family members really sit up and notice was when my stomach started to bloat. The bloating made me look like I was six weeks pregnant but there was no way I was pregnant,” she said.

The bloating was caused by a 19cm-long tumour in the pelvic area, across her left ovary. Ms Wang underwent an eight-hour operation to remove the tumour as well as her left ovary. “I’ve been told that menopause might kick in earlier for me, but I can still have children,” she said.

One of the top concerns for younger patients battling the disease is the loss of fertility.

According to Dr Ng, conventional surgical treatment of ovarian cancer usually involves removing all of the reproductive organs: The womb or uterus, Fallopian tubes and ovaries.

However, Dr Ng said younger patients now have the option of retaining their fertility through fertility-sparing surgery, when possible.

Ms Deborah Wong, one of the youngest ovarian cancer patients seen at NUH Women’s Centre, is a case in point. Diagnosed with advanced stage ovarian cancer at the age of 26, she went on to deliver a healthy baby in 2014 after undergoing fertility-sparing surgery and chemotherapy.

After her surgery, Ms Wang underwent six cycles of chemotherapy over five months while preparing for her O-Level examinations. During chemotherapy, she found having to rely on others more challenging than the harsh side effects of fatigue, hair loss and vomiting.

“I never felt self-pity,” she said. “The few times I cried during treatment was because I felt like I was being a burden to my family and friends. I felt frustrated when people kept offering to do things for me. It was also hard having to miss out on my favourite sport, soccer.”

The worst is now over. Ms Wang did well enough at her O-Levels to be accepted into a local polytechnic and is now studying her “dream diploma course” in tourism and resort management.

Expected to graduate in May, Ms Wang has regained control of her life. But the disease has left an indelible mark on her loved ones, despite completing treatment three years ago.

“Cancer is still always on my family’s mind. Everyone still constantly reminds me not to do this or that,” she said. “Obviously, I hope the cancer never comes back, but what I really want now is to live life to the fullest instead of worrying about it.”

To read this article by TodayOnline.com on The Clearity Portal click here.