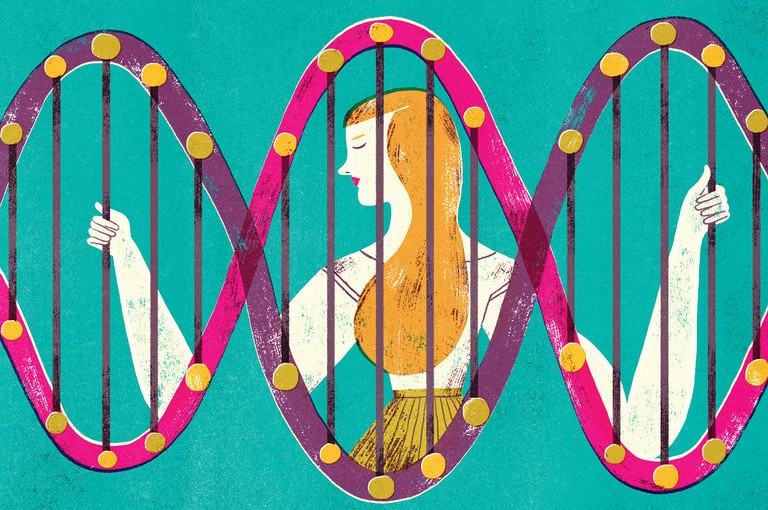 With cancer, there are generally two scenarios – you either have it or you don’t. But I am somewhere in the middle, stuck inside a vortex. I don’t have cancer, but as a notable breast surgeon told me, “For you, it’s not a matter of if you’ll get it, but when.” And so I find myself on permanent standby… just waiting.

While many women at risk for cancer opt to have themselves tested for the BRCA gene mutation, which significantly increases one’s risk of developing breast, ovarian and pancreatic cancer, it’s not a test I would have chosen to take, given the absence of cancer in my family.

My husband was adopted and wanted to learn more about his genetic makeup, so he selected an online genetics test, 23andMe, and out of curiosity, I decided to join him.

My genealogy results were delivered via an email notification. Several items in the report were flagged as “high risk,” including testing positive for the BRCA1 gene mutation. Oddly enough, it also showed that my DNA put me at a decreased risk for breast cancer, pancreatic and ovarian cancer. It didn’t make sense.

I did know that the test for a breast cancer gene was expensive, costing roughly $4,000 and at that time administered almost exclusively by Myriad Genetics. I had simply paid $99 to 23andMe on a lark, and dropped a vial of saliva into the mailbox to receive my results. I found it hard to conceive that a test that purported to tell me my genetic sensitivity to the sound of chewing and my ability to taste bitter foods could also deliver news about cancer risk. In fact, the test results would prove to be accurate. This was in 2013. At that time, 23andMe had received permission from Myriad to test for just three of the BRCA mutations that account for the majority of inherited breast and ovarian cancer among women specifically with Ashkenazi Jewish heritage, like me.

Shortly after I received my results, the Food and Drug Administration intervened and ordered 23andMe to stop testing for the BRCA mutation. A test for a cancer gene is confusing under the best of circumstances, so the F.D.A. decided it wasn’t a good idea to allow it without close medical supervision.

I took a second genetics test through Myriad, which confirmed the initial finding. I also met with a genetics counselor, several breast surgeons and gynecologists and became an expert in inherited gene mutations. I had a battery of tests done – mammogram, vaginal ultrasound and a CA-125 blood test (a test used in high-risk patients to measure the level of certain cancer antigens in the blood), all of which would become a regular part of my life.

The three years since then have featured a series of false alarms that take me on an emotional roller coaster. We are technologically ahead of the curve and diagnostically behind. Each six-month checkup for ovarian cancer is followed by a CA-125 blood test that delivers false-positive results, followed by a second a few weeks later that is normal.

The M.R.I.s, sonograms and mammograms can detect potential malignancies with such great detail, but our ability to understand just what we’re seeing hasn’t caught up yet. Each and every mammogram or breast ultrasound in the last three years has been followed by additional tests after the detection of a “suspicious area.” If the tests are negative, I will receive a note in the mail for another six-month follow-up, if they find something suspicious, I will receive a call from my doctor the next day. Inevitably, I get the call.

What makes my story particularly complex is that I have no history of cancer in my family because there is no medical history of my family. My father, Bernard Fall, a journalist, was killed in the Vietnam War at the age of 40, as were his parents, in their 30s, during the Holocaust, before any medical problems would have revealed themselves. My mother tested negative, so by process of elimination, my father had passed the faulty gene on to me. There was no medical footprint. When I needed information the most, I had nothing to help guide my decisions.

During one four-week period I had a mammogram, followed up by a second one a week later, an M.R.I. and then a biopsy. Innovation and proactive, preventive measures have outpaced health insurance practices. My insurance company has routinely denied follow-up tests, including an M.R.I.-guided breast biopsy that was needed to dismiss a suspicious mass. They denied coverage with a note in the mail, “We cannot approve this request,” because their records showed a previous M.R.I. “If it’s the same body part you’re having tested,” the insurance representative told me, “the system sees it as unnecessary and won’t let me override it.”

To read this entire article, published online by The New York Times, on The Clearity Portal, please click here.