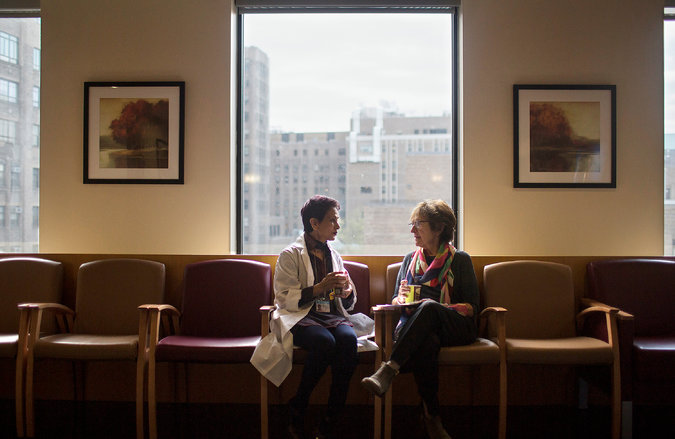 Dr. Mukhergee’s article, ‘The Improvisational Oncologist’, in the New York Times Magazine hits our mission at The Clearity Foundation front and center. He remarks that, “every tumor behaves.differently” even though there are commonalities. We can confirm that this is true for ovarian cancer based on the more than 530 women that have participated in profiling through The Clearity Foundation and that have been included in our database. As a result, many of you are fighting the traditional way of treating ovarian cancer and busting down barriers in the name of change not only for you individually but for women that will be diagnosed in the future.

Dr. Mukhergee’s comments in the article that, “the thought that every individual cancer might require a specific individualized treatment can be profoundly unsettling… the oncologist feels parachuted onto a strange landscape, with no idea which way to go.”  The Clearity Foundation is helping not only patients navigate an increasingly complex landscape but oncologists as well. We are in exciting times for the emergence of new cancer agents but the article points out that while clinical trials are ultimately needed to ascribe effectiveness, this can still be a decades long process and “oncologist still have to treat patients now.”

The Clearity Foundation has been supporting patients on an individualized basis with profiling since 2008 and more recently in helping access novel treatments.  Please email us with questions at info@clearityfoundation.org.

The bone-marrow biopsy took about 20 minutes. It was 10 o’clock on an unusually chilly morning in New York in April, and Donna M., a self-possessed 78-year-old woman, had flown in from Chicago to see me in my office at Columbia University Medical Center. She had treated herself to orchestra seats for “The Humans” the night before, and was now waiting in the room as no one should be asked to wait: pants down, spine curled, knees lifted to her chest — a grown woman curled like a fetus. I snapped on sterile gloves while the nurse pulled out a bar cart containing a steel needle the length of an index finger. The rim of Donna’s pelvic bone was numbed with a pulse of anesthetic, and I drove the needle, as gently as I could, into the outer furl of bone. A corkscrew of pain spiraled through her body as the marrow was pulled, and then a few milliliters of red, bone-flecked sludge filled the syringe. It was slightly viscous, halfway between liquid and gel, like the crushed pulp of an overripe strawberry.

I had been treating Donna in collaboration with my colleague Azra Raza for six years. Donna has a preleukemic syndrome called myelodysplastic syndrome, or MDS, which affects the bone marrow and blood. It is a mysterious disease with few known treatments. Human bone marrow is normally a site for the genesis of most of our blood cells — a white-walled nursery for young blood. In MDS, the bone-marrow cells acquire genetic mutations, which force them to grow uncontrollably — but the cells also fail to mature into blood, instead dying in droves. It is a dual curse. In most cancers, the main problem is cells that refuse to stop growing. In Donna’s marrow, this problem is compounded by cells that refuse to grow up.

Though there are commonalities among cancers, of course, every tumor behaves and moves — “thinks,” even — differently. Trying to find a drug that fits Donna’s cancer, Raza and I have administered a gamut of medicines. Throughout all this, Donna has been a formidable patient: perennially resourceful, optimistic and willing to try anything. (Every time I encounter her in the clinic, awaiting her biopsy with her characteristic fortitude, it is the doctor, not the patient, who feels curled and small.) She has moved nomadically from one trial to another, shuttling from city to city, and from one drug to the next, through a landscape more desolate and exhilarating than most of us can imagine; Donna calls it her “serial monogamy” with different medicines. Some of these drugs have worked for weeks, some for months — but the transient responses have given way to inevitable relapses. Donna is getting exhausted.

Her biopsy that morning was thus part routine and part experiment. Minutes after the marrow was drawn into the syringe, a technician rushed the specimen to the lab. There he extracted the cells from the mixture and pipetted them into tiny grain-size wells, 500 cells to a well. To each well — about 1,000 in total — he will add a tiny dab of an individual drug: prednisone, say, to one well, procarbazine to the next and so forth. The experiment will test about 300 medicines (many not even meant for cancer) at three different doses to assess the effects of the drugs on Donna’s cells.

Bathed in a nutrient-rich broth suffused with growth factors, the cells will double and redouble in an incubator over the course of the following two weeks, forming a lush outgrowth of malignant cells — cancer abstracted in a dish. A computer, taught to count and evaluate cells, will then determine whether any of the drugs killed the cancerous cells or forced them to mature into nearly normal blood. Far from relying on data from other trials, or patients, the experiment will test Donna’s own cancer for its reactivity against a panel of medicines. Cells, not bodies, entered this preclinical trial, and the results will guide her future treatment.

I explained all this to Donna. Still, she had a question: What would happen if the drug that appeared to be the most promising proved unsuccessful?

“Then we’ll try the next one,” I told her. “The experiment, hopefully, will yield more than one candidate, and we’ll go down the list.”

My conversation with Donna reflected how much cancer treatment has changed in the last decade. I grew up as an oncologist in an era of standardized protocols. Cancers were lumped into categories based on their anatomical site of origin (breast cancer, lung cancer, lymphoma, leukemia), and chemotherapy treatment, often a combination of toxic drugs, was dictated by those anatomical classifications. The combinations — Adriamycin, bleomycin, vinblastine and dacarbazine, for instance, to treat Hodgkin’s disease — were rarely changed for individual patients. The prospect of personalizing therapy was frowned upon: The more you departed from the standard, the theory ran, the more likely the patient would end up being undertreated or improperly managed, risking recurrence. In hospitals and clinics, computerized systems were set up to monitor an oncologist’s compliance with standard therapy. If you chose to make an exception for a particular patient, you had to justify the choice with an adequate excuse. Big Chemo was watching you.

I memorized the abbreviated names of combination chemo — the first letter of each drug — for my board exams, and I spouted them back to my patients during my clinic hours. There was something magical and shamanic about the multiletter contractions. They were mantras imbued with promise and peril: A.B.V.D. for Hodgkin’s, C.M.F. for breast cancer, B.E.P. for testicular cancer. The lingo of chemotherapists was like a secret code or handshake; even the capacity to call such baleful poisons by name made me feel powerful. When my patients asked me for statistical data, I had numbers at my fingertips. I could summon the precise chance of survival, the probability of relapse, the chance that the chemo would make them infertile or cause them to lose their hair. I felt omniscient.

Yet as I spoke to Donna that morning, I realized how much that omniscience has begun to wane — unleashing a more experimental or even artisanal approach in oncology. Most cancer patients are still treated with those hoary standardized protocols, still governed by the anatomical lumping of cancer. But for patients like Donna, for whom the usual treatments fail to work, oncologists must use their knowledge, wit and imagination to devise individualized therapies. Increasingly, we are approaching each patient as a unique problem to solve. Toxic, indiscriminate, cell-killing drugs have given way to nimbler, finer-fingered molecules that can activate or deactivate complex pathways in cells, cut off growth factors, accelerate or decelerate the immune response or choke the supply of nutrients and oxygen. More and more, we must come up with ways to use drugs as precision tools to jam cogs and turn off selective switches in particular cancer cells. Trained to follow rules, oncologists are now being asked to reinvent them.

The thought that every individual cancer might require a specific individualized treatment can be profoundly unsettling. Michael Lerner, a writer who worked with cancer patients, once likened the experience of being diagnosed with cancer to being parachuted out of a plane without a map or compass; now it is the oncologist who feels parachuted onto a strange landscape, with no idea which way to go. There are often no previous probabilities, and even fewer certainties. The stakes feel higher, the successes more surprising and the failures more personal. Earlier, I could draw curtain upon curtain of blame around a patient. When she did not respond to chemotherapy, it was her fault: She failed. Now if I cannot find a tool in the growing kit of drugs to target a cancer’s vulnerabilities, the vector feels reversed: It is the doctor who has failed.

Yet the mapless moment that we are now in may also hold more promise for patients than any that has come before — even if we find the known world shifting under our feet. We no longer have to treat cancer only with the blunt response of standard protocols, in which the disease is imagined as a uniform, if faceless, opponent. Instead we are trying to assess the particular personality and temperament of an individual illness, so that we can tailor a response with extreme precision. It’s the idiosyncratic mind of each cancer that we are so desperately trying to capture.

To read this entire article, published by The New York Times Magazine, on The Clearity Portal, click here.