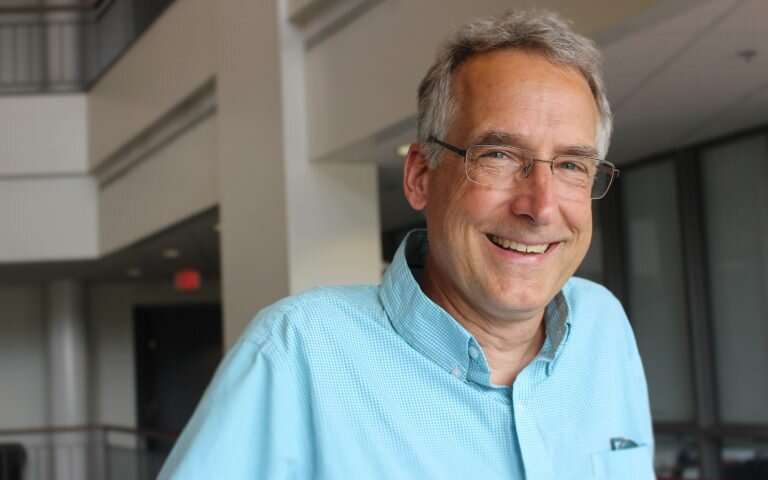 University of North Carolina Lineberger Comprehensive Cancer Center researchers have uncovered the mechanism that explains how an investigational cancer therapeutic might be working—a finding that they believe could be important for the design of potential new therapies.

In the journal ACS Chemical Biology, researchers explain how the investigational compound ONC201 may be working in cancer cells. ONC201 is being evaluated in multiple clinical trials, but researchers reported that the mechanism behind its action has been unclear.

“We couldn’t confirm the mechanism for this drug that others had found,” said UNC Lineberger’s Lee M. Graves, Ph.D., professor in the UNC School of Medicine Department of Pharmacology. “We thought there was another target, so we went looking for it.”

ONC201, which is being developed by the Oncoceutics Inc., has been given fast-track designation by the U.S. Food and Drug Administration for the treatment of certain recurrent gliomas. UNC Lineberger researchers also have studied the potential anti-tumorigenic effects of ONC201 in human ovarian cancer cells. UNC Lineberger’s Victoria Bae-Jump, MD, Ph.D., a professor in the UNC Department of Obstetrics & Gynecology, reported preliminary data at the American Association for Cancer Research Annual Meeting in April that showed the compound reduced ovarian tumor growth in preclinical models. The data suggest ONC201 could be a novel treatment for ovarian cancer. In addition, she’s involved in a phase II clinical trial to study the compound as a potential treatment for patients with type 2 endometrial cancer at the N.C. Cancer Hospital.

To better understand what the compound might be doing inside the cells, Graves and his colleagues worked with novel “chemical analogues” of ONC201 from the company Madera Therapeutics LLC. They did an experiment—Graves said it was akin to a “fishing expedition” inside the cells—using the chemical analogues as bait. Then they used affinity chromatography and mass spectrometry to see what they had caught with the compounds. They discovered the compounds bound to a molecule known as the human mitochondrial caseinolytic protease P molecule, or ClpP.

“We showed that our compounds were not only binding to ClpP, but they were activating it,” he said.

When activated, ClpP is known to play a role in mitochondria. Called the “powerhouse of the cell,” mitochondria helps generate energy for cells. Graves said the ClpP molecule is a destructive force in mitochondria—it chews up proteins. Researchers have questions about ClpP’s function in cancer, but they believe it may cause energy activities to change within cells.

“There is some evidence that there are other metabolic vulnerabilities that require the mitochondria in a way that we don’t completely understand, but by taking the mitochondria out of action, gives us a selective action against cancer cells,” Graves said.

Their finding differs from what scientists had previously thought the compound was doing in cancer cells—that it was involved in interfering with the activity of the dopamine receptor.

“We are not saying that it isn’t possible, but our data don’t support the dopamine receptor as a major target,” Graves said.

The finding not only elucidates the mechanism of Onc201 and the related Madera analogues, Graves said, but it also reveals ClpP as a novel target that researchers could try to go after with other potential cancer treatment compounds.

“We think there’s going to be a lot of interest in developing other anti-cancer molecules to target ClpP,” he said.

This article was published by Phys.org.