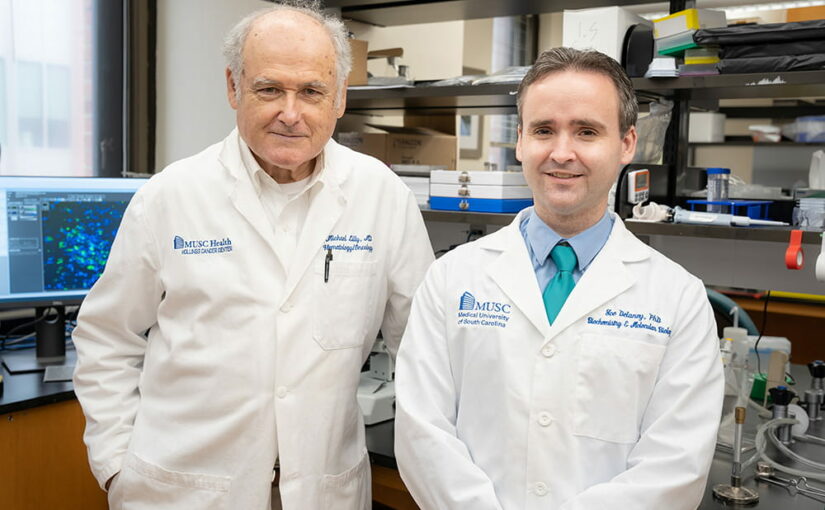 A combination of up to five drugs normally used to treat conditions ranging from HIV to Type 2 diabetes could destroy cancer cells yet be less toxic than a chemotherapy drug used for recurring ovarian cancer.

After promising preclinical results, researchers at MUSC Hollings Cancer Center are now launching a phase 1 clinical trial to establish safe levels of various combinations of the drugs in patients with advanced solid tumors.

Autophagy is a cellular recycling process that occurs in all human cells, Delaney explained. Although the drugs in question – hydroxychloroquine, nelfinavir, metformin, dasatinib and sirolimus – were developed to treat, respectively, malaria, HIV, Type 2 diabetes and chronic myeloid leukemia and to prevent organ rejection in kidney transplant patients, what they all have in common is that they affect this cellular recycling process.

“All the drugs on this trial affect autophagy in one way or another. Even though they were originally designed for these other diseases, we’ve learned from the decades of studying them that they actually impact this process of autophagy, which all human cells have,” Delaney said. “That’s true of our normal cells. And that’s also true of cancer cells. It’s just that the cancer cells cannot perform that recycling nearly as well as our normal cells can. And so, to us, that was our therapeutic window.”

Repurposed drugs, on the other hand, have already been used by potentially millions of patients. “It really puts you many years ahead in the developmental pathway,” Lilly said.

In a paper published in June in Frontiers in Toxicology, Delaney showed that 14 doses of these five drugs were less toxic than Doxil, a chemotherapy drug used to treat ovarian cancer, multiple myeloma and AIDS-related Kaposi’s sarcoma. Now, the phase 1 trial will show safety levels in humans.

“We’re really enthusiastic that this might be that opportunity to try multiple drugs,” Delaney said. “Since we started from that side effect profile to begin with, hopefully we have something that has much less toxicity. And of course, we’ll be finding out in the coming months if that’s actually true or not.”

The drugs will be tested in a series of various combinations. Previous studies of drugs that target autophagy have mostly focused on adding one autophagy drug to a chemotherapy regimen or immunotherapy regimen, Lilly said. By combining multiple autophagy-targeting drugs, this trial hopes to identify a combination that prevents the cancer cells from evolving resistance to the drugs.

“We have very good evidence that it’s a synthetic lethal combination for cancer cells, which is what everybody in cancer wants, but it’s just never been tried in people before. And so, we’re really excited to see this combination in a cancer setting,” Delaney said.

“We have very good evidence that it’s a synthetic lethal combination for cancer cells, which is what everybody in cancer wants, but it’s just never been tried in people before. And so, we’re really excited to see this combination in a cancer setting.”
– Joe Delaney, Ph.D.

Synthetic lethality refers to when mutations in two genes together result in cell death, but a mutation in only one of the partner genes does not.

This human trial is a result of work in the lab that was funded by both the National Cancer Institute and donor Matt Prisby, who established a fund at Hollings for research into women’s cancers after his wife died of cervical cancer in 2014.

“This trial couldn’t have happened without Matt Prisby and everyone who donated to his fundraisers,” Delaney said. “Dedicated funding programs like the one he established at Hollings are critical for investigators to get the early results that will convince large funding entities to invest in continued research along these lines.”

Delaney also hopes that a combination of these drugs will prove effective for a broad swath of patients. Operating within the concept of precision oncology, researchers have been looking for ways to target mutations in patients whose tumors have been sequenced. Yet fewer than 10% of patients are eligible for precision therapy, Delaney said, referring to an area of medicine that uses information about a patient’s own genes to develop specific treatments that, in terms of cancer, target that individual’s tumor.

This trial targets aneuploid gene changes – an extra or missing chromosome – which is common in cancer cells, ranging from 20% to 95% in advanced solid tumor patients.

“If it works, many, many more patients could be eligible than for other targeted therapies,” Delaney said.

The phase 1 trial is accepting patients with an advanced solid tumor of any type. Once the trial moves to phase 2, the researchers will focus on specific cancer types. Lilly said early indications are that these drugs might be particularly effective against ovarian and prostate cancers.

Lilly, who treats patients with prostate cancer and runs his own lab focused on advanced prostate cancer, said that this collaboration with Delaney would only be possible at an academic cancer center like Hollings, where researchers work alongside the doctors who provide care to patients. Delaney and Lilly, each with their own areas of expertise, can share ideas, and patients have access to early trials like this.

“Sherlock Holmes once referred to bits of data as having cumulative force when you have three or four different things, each of which points in the same direction,” Lilly said. “And that’s the power of collaborative research at Hollings.”

Watch how jamming the cellular recycling process is lethal to these ovarian cancer cells.

The first video shows high-grade serous ovarian cancer cells grown in the lab and labelled with fluorescent proteins to measure how the molecular recycling process of autophagy is working in live cells.

When the movie starts, the cells had just begun a treatment of a version of COAST therapy. As the movie progresses, the cells try to turn on autophagy in response to these COAST drugs – they fluoresce brighter.

However, properly recycling autophagy would fluoresce red, whereas these cells fluoresce yellow, indicating their recycling system is jammed and cannot complete its function. As a result, these cancer cells accumulate too much cellular debris and pop, as seen by a sudden darkening of a single cell.

This article was published by Medical University of South Carolina.