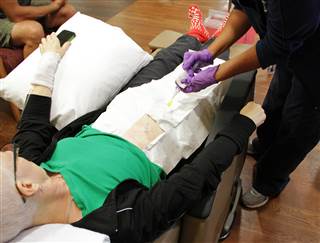 Ovarian cancer is being shortchanged in terms of medical attention and understanding, even though it’s one of the deadliest cancers there is, experts reported Wednesday. It’s still treated as a single cancer even though there are actually multiple types, many of which do not even start in the ovaries, the National Academy of Medicine reported.

And treatment falls short, the panel of experts said. There are not many treatments to choose from, but half of all women with ovarian cancer don’t even get the best treatments out there.

“In spite of their high mortality rates, ovarian cancers often do not receive as much attention as other cancers,” reads the report from the Academy, formerly named the Institute of Medicine.

“The five-year survival of women with the most common and fatal type of ovarian cancer, high-grade serous carcinoma, has increased over the past four decades as a result of advances in specialty care and the development of effective first-line chemotherapy (i.e., platinum compounds in combination with drugs of the taxane family),” reads the report from the committee, chaired by Dr. Jerome Strauss, dean of the school of medicine at Virginia Commonwealth University.

“However, there are concerning racial disparities and a number of unresolved issues regarding the optimal treatment of newly diagnosed women which if addressed could lead to further reductions in morbidity and mortality. Moreover, important discoveries that directly influence clinical recommendations or care have not been widely adopted,” it adds.

A woman has a much better chance of surviving ovarian cancer if she is treated by a gynecologic cancer specialist in a place where many cases of ovarian cancer are treated. But that’s not an option for many women, the report said.

To read this entire article by NBC News on The Clearity Portal, click here.