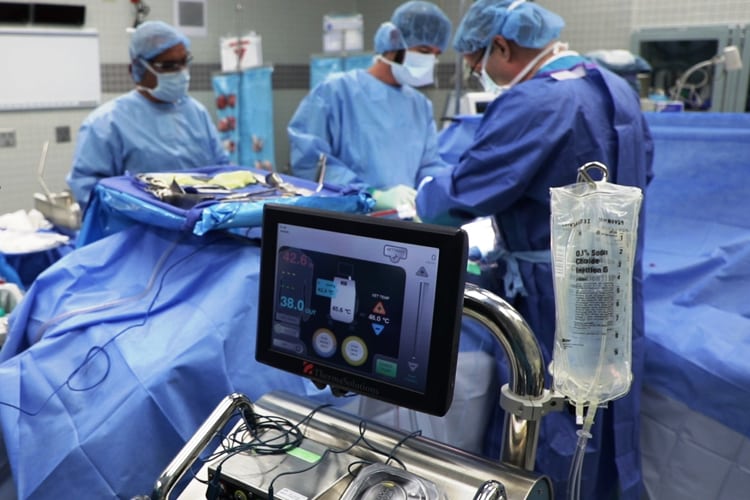 A heated chemotherapy organ bath circulated throughout the abdomen after surgery can significantly prolong a woman’s survival with advanced ovarian cancer, according to doctors testing the new treatment.

Patients who underwent the experimental procedure at 8 hospitals in the Netherlands typically survived 45.7 months compared to 33.9 months for women who just received the tumor-removal surgery and conventional chemotherapy.

“For ovarian carcinoma, for the last 30 years there has not been a lot of improvement in overall survival, so with any treatment that shows improvement, we’re really excited about the results,” chief author Dr. Willemien van Driel of the Netherlands Cancer Institute told Reuters Health in a telephone interview.

The study, published in The New England Journal of Medicine, represents “the most convincing information to date” that the treatment “may provide a meaningful advantage for a defined group of patients with cancer,” according to an editorial by Drs. David Spriggs and Dr. Oliver Zivanovic of the Memorial Sloan Kettering Cancer Center in New York City.

The test “is a very important first step but should not drive changes in practice yet,” they said.

It is not clear, for example, how much of the improvement was caused by the chemotherapy itself or the fact that it had been warmed in hopes of making it more reactive with residual tumor cells.

Nor is it clear how much the procedure would add to the cost, said Spriggs and Zivanovic. The abdominal chemotherapy bath adds two hours to the time in the operating room.

But the side effects were minimal, said van Driel. “It’s a well-tolerated procedure.”

A similar procedure is already being used for colorectal cancer, she said.

The American Cancer Society estimates that about 22,000 cases of ovarian cancer are diagnosed in the U.S. each year, killing about 14,000. For about 3 out of 4 women, by the time it is discovered, the tumor cells have spread to the lining of the abdomen, making eradication difficult.

Doctors have tried circulating anti-cancer drugs in the body cavity before, but the treatment can be cumbersome. Doing it as part of the surgery was part of an effort to make it easier. Heating the fluid to 104 degrees Fahrenheit (40 degrees Celsius) was an added feature.

All of the 245 women in the study had stage III epithelial ovarian, fallopian tube or peritoneal cancer. They initially received three cycles of treatment with carboplatin and paclitaxel, and were stable before surgery. After doctors had removed all visible tumor, half the volunteers had a warmed solution of another anti-cancer drug, cisplatin, circulated through their open abdominal cavity for 90 minutes. The fluid was then drained.

All the women subsequently received three cycles of the drugs carboplatin and paclitaxel, beginning about a month after their surgery.

The likelihood of surviving for three years after surgery was 48 percent with conventional treatment and 62 percent with the chemotherapy organ bath.

The patients getting standard care typically went 10.7 months without a recurrence of their cancer. It was 14.2 months for those who received the warmed chemotherapy infused through the abdomen.

Serious side effects occurred in 25 percent of the women getting conventional treatment and 27 percent who also got the abdominal bath. The most common problems were abdominal pain, infection, and a shutdown of bowel function known as ileus.

Patients getting the experimental treatment spent, on average, two extra days in the hospital.

Because of that, plus the extra time in the operating room, the cost of extra equipment and the need for a specialist to supervise fluid flow through the abdomen, the new procedure is expected to cost more.

This article was published by Reuters.