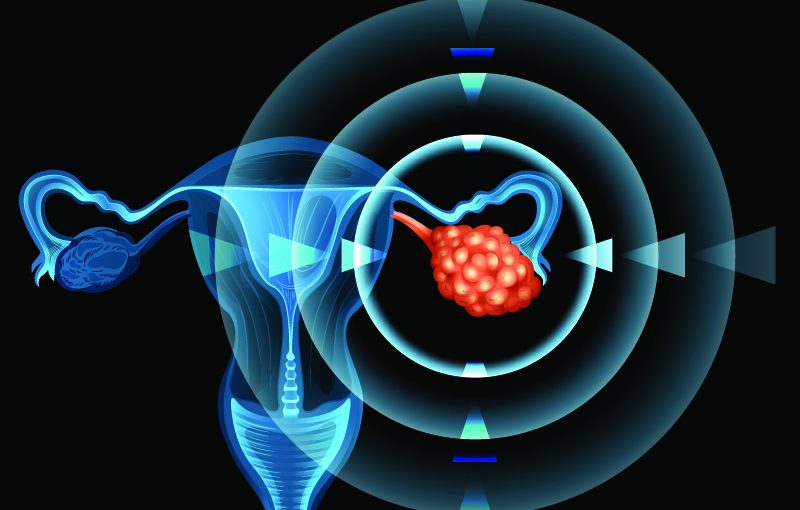 The presence of a BRCA germ line mutation in patients with invasive epithelial ovarian cancer may confer a short-term survival advantage, but is not associated with a reduction in long-term mortality, researchers found.

A follow-up study comparing medical records in a nonselective group of 779 patients diagnosed with the cancer showed that carriers of the Ashkenazi Jewish founder mutations in BRCA1 and BRCA2 had a 5-year survival rate of 46.7%, compared with 36.2% in non-carriers (P=0.0004).

These findings may have implications for the prognosis and clinical management of patients with epithelial ovarian cancer who are BRCA1/2 carriers, according to Ofer Lavie, MD, of the Carmel Medical Center and the Israel Institute of Technology in Haifa, and colleagues, reporting online in Gynecologic Oncology. “The results of this study, with up to 20 years of follow-up, support studies with shorter follow-up that suggested that the advantage in survival observed among BRCA1/2 carriers during the first 5 years decreases over time,” the team wrote.

Although larger studies with longer follow-up are needed, with long-term survival and improved outcome, “a cure should remain the goal,” the researchers emphasized. Epithelial ovarian cancer accounts for 90% of ovarian cancers. The age-adjusted HR for all-cause mortality of carriers versus non-carriers was 0.74 in the first 5 years.

The investigators noted that in spite of standard first-line treatment with a combination of debulking surgery and taxane and platinum chemotherapy, the 5-year survival ratehovers around 30%.

Targeted therapy with poly (ADP-ribose) polymerase (PARP) inhibitors appears to be particularly effective in the patients with BRCA mutations, they pointed out.

“The surveillance and follow-up of ovarian cancer patients with and without BRCA germ line mutation should be similar, and the use of PARP inhibitors should be considered for a longer maintenance period,” Lavie told the Reading Room.

The best clinical strategy for gynecologic follow-up and treatment in epithelial ovarian cancer BRCA carriers is well summarized in the National Comprehensive Cancer Network guidelines, he noted, adding: “We believe that the recommendations should be personalized.”

Tumor marker testing should be performed in patients ages 25 to 35, said Lavie, noting that in general, BRCA1 and BRCA2 carriers should undergo a 6-month follow-up gynecologic examination and transvaginal sonography. This should then be followed by risk-reduction salpingectomy at age 35 and oophorectomy at age 40, with BRCA1 and BRCA2 carriers undergoing fertility preservation prior to RRBSO.

“Despite being a rare manifestation of ovarian cancer, the possibility of developing brain metastases should be considered in these patients, especially in those harboring BRCA mutations,” Brastianos said. “If patients develop neurologic symptoms, we should have a low threshold to get brain imaging — preferably an MRI.”

“The availability of new therapeutic options that may prolong overall survival and may not cross the blood-brain barrier could also lead to an increase in brain metastases in patients with ovarian cancer,” the authors suggested.

About 20% of patients with high-grade serous ovarian cancer carry BRCA1/2 mutations, the researchers noted. While the average incidence of brain metastases resulting from ovarian cancer is 2.6%, this percentage has increased over time. Improved imaging techniques and increased survival following ovarian cancer treatment may account for this increase, the team said.

When it comes to reducing the risk of epithelial ovarian cancer, a new study indicates that breastfeeding may offer the same long-lasting protection as the use of oral contraceptives and childbearing.

Analysis of data from the Hormones and Ovarian cancer Prediction (HOPE) study of 689 incident cases of epithelial ovarian cancer (EOC) and 1,572 community controls from Pennsylvania, Ohio, and New York showed that breastfeeding for 3 months was associated with a 30% reduction in risk (odds ratio [OR] 0.70) compared with never breastfeeding.

Although this risk-reduction effect declined over time, it still persisted for more than 30 years (OR=0.69), Francesmary Modugno, PhD, of the University of Pittsburgh School of Medicine, and colleagues reported online in Gynecologic Oncology.

Since 82% of women in the U.S. give birth to at least one child, improving compliance “could impact EOC risk in the vast majority of U.S. women,” the researchers said.

“The association between ever breastfeeding and reduced EOC risk is similar in magnitude and persistence as that observed for oral contraceptive use and for bearing children, the two well-established EOC protective factors,” Modugno told the Reading Room. More research into the biological factors underlying the EOC-breastfeeding link “can potentially shed light on EOC etiology and open pathways to identifying new prevention modalities, which are critical in overcoming this highly fatal malignancy.”

The study also showed that a greater number of breastfeeding “episodes” — i.e., total duration of breastfeeding divided by the number of offspring — was associated with a greater reduction in EOC. One to two episodes had an odds ratio (OR) of 0.78, but for three or more episodes, the OR was 0.49 (P=0.01) compared with never breastfeeding.

Similarly, the longer breastfeeding continued, the greater the reduction in risk. The OR was 0.75 when breastfeeding lasted less than a year, but 0.62 for a year or longer.

Clinicians need to do more to encourage and support women to breastfeed, Modugno emphasized.

She and her colleagues noted that the American Academy of Pediatrics (AAP) recommends exclusive breastfeeding for 6 months and “minimal” breastfeeding for 1 year. This recommendation has been affirmed by the American College of Obstetricians and Gynecologists (ACOG). However, a survey of breastfeeding in U.S. children born from 2002 through 2014 found that compliance with these guidelines is poor, Modugno pointed out: “Many women start supplementing when they return to work, and less than half of all women continue to breastfeed through 6 months postpartum. By 1 year after birth, only 27% of mothers are still breastfeeding.”

Giving women a longer maternity leave and providing workplace accommodation to support nursing mothers upon their return to work outside the home could help increase compliance with breastfeeding guidelines, she said. Professional lactation support should begin in pregnancy and continue for the first several months postpartum or longer, as breastfeeding support is needed.

“We as a society need to become more aware of the tremendous benefits of breastfeeding for both mother and child and the plethora of expertise available to support women,” Modugno concluded.